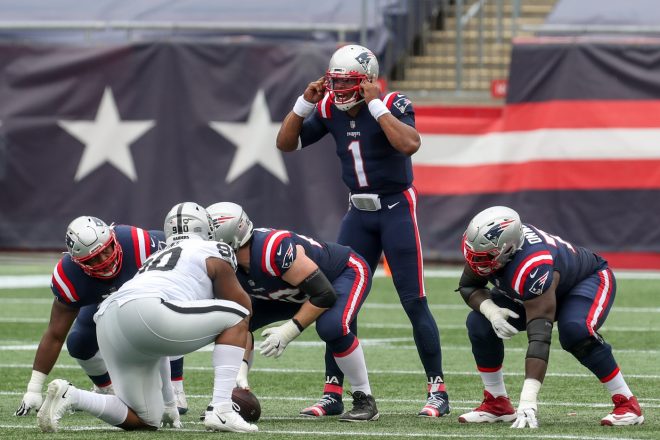 It is hard to believe that after this afternoon’s games, we’ll already be at the quarter-point of the 2020 season. And despite the postponement of the Steelers-Titans game this afternoon, the league and the teams overall have done a great job of trying to keep everyone healthy this season.

With that being said.. (as I wrote the above late on Friday night), now Cam Netwon has tested positive for COVID-19, and he won’t be playing. Right now the game is in the process of being rescheduled to either Monday or Tuesday.

The Patriots released a statement on Saturday morning:

“Late last night, we received notice that a Patriots player tested positive for COVID-19. The player immediately entered self-quarantine. Several additional players, coaches and staff who have been in close contact with the player received point of care tests this morning and all were negative for COVID-19.

“We are in close consultation with the NFL, as well as our team of independent doctors and specialists, and will follow their guidance regarding our scheduled trip to Kansas City and the game against the Chiefs. The health and safety of our team, as well as our opponent, are of the highest priority.”

Let’s hope the league just decides to forego this game until later in the season. As we saw from what transpired in Tennessee, more positive tests are coming…from both teams. And with Newton already infected, the last thing the league needs is for Mahomes, who is the new face of the NFL to get sick and miss time. But as of 5 p.m. on Saturday…we wait. And assume that they will play on Monday or Tuesday.

Brandon Copeland: After languishing for four seasons with the Lions and the Jets (two each), the Patriots’ new addition at linebacker can be excused for being a little excited for being part of a big game today. After all, with his previous teams, those opportunities were limited at best.

“It’s fun. There’s are the reasons you play football – big games against great opponents, great challenges,” said Copeland in a virtual interview with the media. “But these are literally the reasons why you sign up to play the game. These are the games you want to be in.”

“These are the games that, you know, again, I know not only am I excited, my family’s excited, but we’re also all excited for the opportunity. We know others will be watching and that’s a great thing.”

Michael Pinckney: The Patriots have made a change with their practice squad signing the linebacker Pinckney and releasing DT Xavier Williams. He worked out for the team earlier this week.

Pinckney played weakside linebacker and was a four-year starter at Miami. He was named to three All-ACC teams (honorable mention in 2017 and 2018; and a second-team selection in 2019).

Pinckney, however, is a slightly undersized 5-foot-11, 235-pound, and is a downhill run defender who suffers from a lack of range which limits his usage off the ball, something the Patriots lack right now.

Ryan Izzo: Talk about the difference a year makes. Izzo last season was the team’s third tight end behind Matt LaCosse and Benjamin Watson. Through three games and utilizing his blocking skills, he leads the skill position players in snaps…now would be a nice time to increase some production in the passing game though.

White, Harris, Olszewski Return: The Patriots welcomed back James White (death in the family), as well as Damien Harris, and Gunner Olszewski from IR who all returned to practice this week. The offense could use all three, however it isn’t known yet whether the team will activate Harris and Olszewski this week. Or if even White will play. But it is good to see them back at practice…

Chase Winovich TE? Just Do It: A lot was written this week about Chase Winovich playing some tight end at Michigan and the possibility of it happening in New England, aka Mike Vrabel in goalline situations… Sign me up. Put him in as a blocking tight end and give the defense someone else to think about. Both donned #50 for the Pats. Maybe give it a shot. Speaking of Winovich

Did You Know?… On this day in 1964, the Boston Patriots routed the Denver Broncos 39-10 in Denver. Running back J.D. Garrett rushed 12 times for 121 yards, including a 42-yard touchdown and caught three passes for 56 yards. Ron Burton rushed for a touchdown and caught another one from Babe Parilli. The Patriots rushed for 207 yards as a team and intercepted Broncos QBs three times while running their record to 4-0.

4th & 2 Podcast – If you’ve haven’t checked out our PatsFans.com podcast, “Patriots 4th & 2” in a bit, please check it out. We recorded a podcast on Friday talking Raiders win and the upcoming Chiefs game. Check it out.

McDaniels and Newton Are Far Ahead of the Curve in 2020:

Although the Patriots got the not-so-good news of Cam Newton testing positive for the coronavirus on Saturday, he and Josh McDaniels have had a really good start to the season.

The Patriots have always prided themselves on putting players in a position to be successful but having to retool the offense from one that played to Tom Brady’s strengths to one where Newton already seems to have a nice comfort level in and is playing at a high level was completely unexpected so early.

They’ve really made great strides and have had very different game plans each week. Newton has totally bought in and he and McDaniels seem to be in lockstep. The two have even worked on Newton’s throwing mechanics. Although it is a very small sample size, through three weeks, the Patriots have the #1 rushing offense and are 11th in points scored. It is only going to get better from here. Hopefully, Newton recovers well and quickly from the COVID-19 and get back on the field.

Bills Raiders in a Tough Test For Both Teams:

The Buffalo Bills look to stay unbeaten when they travel to Vegas to take on the Raiders. Both teams look to run the ball, the Bills obviously saw the Patriots run for 250 on Vegas last week, and know that running will open up play action for shots down the field.

But the Bills run defense hasn’t been up to par with the past few years and with Josh Jacobs, the Raiders could be looking to do the exact same thing. The Bills are getting Josh Norman back off of IR this week.

Josh Allen is really coming into his own this year. His fourth-quarter passing rating is 138.3 tops in the AFC. He’s completing 72 percent of his passes in the fourth quarter and averaging 10.8 yards per attempt, with three touchdowns and no interceptions. On third downs, Allen has a 139.5 passer rating and completing 74% of his passes, again with three touchdowns and no interceptions.

Look for another close game, but this Buffalo offense looks really strong this season.

The Miami Dolphins have had 10 days to prepare for the Seahawks and Russell Wilson after an impressive win over the Jaguars. But the zones they ran against Minshew won’t work against Wilson and Brian Flores will have his work cut out for him.

Miami’s secondary will have a tough time containing Tyler Lockett, D.K. Metcalf, Greg Olsen, as well as former Patriots Jacob Hollister. Because their pass rush has had trouble getting home and if you blitz Wilson, you better keep containment.

What the Dolphins really need is another big game from Ryan Fitzpatrick and the offense taking some pressure off of the defense. And the Seahawks defense is the first ever to give up 1200 yards passing in the first three weeks of a season. Could the heat (temps to be 87) wear down Wilson and the Seahawks? I think it will be close, but I’m taking Seattle here.

The Jets Are a Hot Mess:

The New York Jets are 0-4 and said that head coach Adam Gase’s job is safe. And three other teams in the AFC East just approved that message. Because under his watch this team isn’t going anywhere.

In an eminently winnable game facing the Broncos 3rd QB in his first NFL start, the Jets defense in the early going made Brett Rypien look like his uncle Mark. And when they did stop him, stupid penalties by their defense. The Jets’s defense under Greg Williams is an undisciplined lot, they conducted personal fouls (six) all night long including at the end of the game when Gase burned up all their timeouts to get the ball back, and they hit on another one. But that is Williams’ M.O. and that is what he teaches.

Pierre Desir was almost the recipient of the “Larry Brown Trophy” of being the MVP of a game where the opposing QB throws the ball right to him, the last for a pick-six. When Rypien didn’t lob picks at him, they picked on Desir. Eight catches, for 134 yards and two TDs.

But that tough Williams’ defense playing tough-guy sandlot football. They were +3 in turnovers and still gave up 37 points. And before you put all the blame on Williams, Gase, the head coach is just as guilty. He put in his job.

The Jets offense facing a beat-up Denver team had its highest offensive output of the season…321 yards. Sam Darnold completed just 54 percent of his throws. The Gase QB whisperer isn’t working out in NYC.

The Jets schedule doesn’t look very favorable in the next few weeks. They have the Cardinals, Chargers, Bills, Chiefs, and Patriots in their next five games. Give Gase an extension now.

“Yeah, absolutely. I mean, Cam does a great job of connecting with everybody, whether it’s his teammates, his receivers, guys on defense, other people in the organization. Again, I think the captain voting – not that that’s the ultimate or final determination of leadership – but I think the fact that he has been here a pretty short amount of time and earned that type of respect and support from his teammates is pretty impressive. But, I think it’s across the board. It’s the offensive line, it’s the receivers, it’s all the offensive players and coaches and it extends into other areas, as well – special teams and defense and other people in the organization. I think that we’ve all seen that and it’s impressive. It’s impressive. He’s here a lot, he’s in the building and he’s visible, he’s in sight and is connecting with people as much as any player. He’s in the building more than any player on the team, but he spends a lot of time talking and connecting and building relationships with those people. I mean, he has tremendous leadership, so it’s very impressive..”

Bill Belichick on being asked about how much Cam Newton has been in the building.

VIDEO: The Top 10 Patriots Plays of 2020
By: Robert Alvarez
| Patriots Video
Check out the top ten plays from the 2020 New England Patriots.
4 days ago

NFL Coaching Changes and Mark’s Morsels
By: Mark Morse
| 2021 NFL Offseason
Some thoughts on some of the NFL coaching changes and prospects.
5 days ago