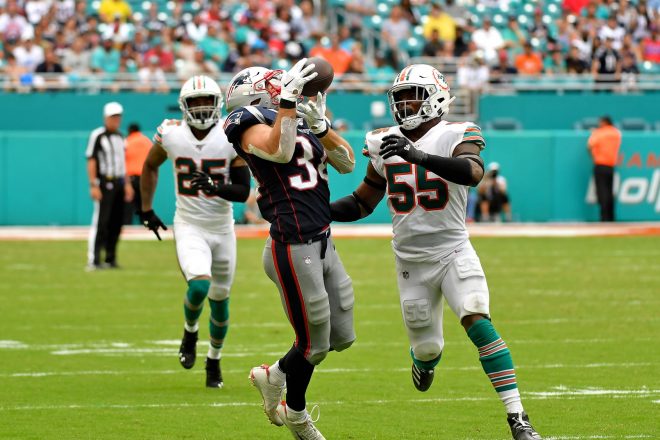 The Patriots’ 2020 NFL season is finally here. To say that there were questions about whether we’d ever get here after the long spring and summer locked down by the COVID-19 coronavirus is an understatement.

But after all of the distractions and changing norms, it is back to football…finally. And the Patriots are still the reigning AFC East Champs until knocked off the throne. Both Buffalo, who is the trendy pick to win the division and Miami, have plans to do just that.

The Patriots (12-4 in 2019) have made huge amounts of changes since they last took the field. Gone are Tom Brady, Kyle Van Noy, Jamie Collins, Elandon Roberts, Ted Karras. Dont’a Hightower and Marcus Cannon opted out. Obviously, Brady leaving after 20 years is the big news but having Cam Newton replace him is full of intriguing options.

The Dolphins (5-11) ended the year on a hot streak and have made wholesale changes to a defense that was porous for most of the season finish at or near the bottom in many categories. Although they drafted Tua Tagovailoain the 1st round of the draft, they have wisely let Ryan Fitzpatrick begin the season as the starting QB, until the rookie finds his footing in the NFL. An interesting footnote is that three former Patriots who came over to Miami this spring, (Ted Karras, Elandon Roberts, and Kyle Van Noy) were elected captains for Miami.

The Patriots and Dolphins have been playing each other twice a year since 1966 and are playing for the 110th time since they first met in 1966. Miami owns the overall series lead 56-53. But while both teams have lopsided leads on the home field (Miami is 38-17 at home vs NE, while the Patriots are 36-18 at home vs Miami), the teams split last year both winning on the road. The Patriots blew out the Dolphins 43-0 in Miami in Week 2, but Miami flipped the script and knocked the Patriots out of a bye week and the #2 seed with a 27-24 win on Week 17.

The Patriots running game is an area where it seems the team is going to lean heavily on in 2020. Especially given that Cam Newton is under center and will have to accounted for by the Dolphins linebackers.

Having the offensive line nearly entire intact to start the season will definitely help the running game get untracked. Sony Michel and Rex Burkhead should see a lot of carries in this one. The team used Damien Harris heavily in camp and he seemed primed for a starting role until breaking his finger and will miss at least the first three games.

Miami’s run defense was atrocious in 2019, allowing 135.4 yards per game, the front three, led by Christian Wilkins and Davon Godchaux are still a question mark, but they’ve really improved their linebacker depth, bringing in Roberts and Van Noy from the Patriots as well as Shaq Lawson.

Newton tips the scales here, the linebackers can’t sell out and crash down trying to stop the run and have Newton keep the ball and make them pay with his feet. He should give the Patriots those short-yardage situations a shot in the arm.

The Patriots passing game is a question mark. After Julian Edelman, there are question marks. Is N’Keal Harry ready to assume the role of a productive reliable receiver in the offense after a lost rookie (injuries) season? Gunner Olszewski, Damiere Byrd, Jacoby Meyers??? Question marks abound. Rookie tight ends Devin Asiasi, Dalton Keane show promise but are questions themselves at this early juncture.

Miami’s secondary should be much improved, Xavien Howard has returned and is healthy. They picked up Cowboys’ corner Byron Jones and then drafted Auburn’s Noah Igbinoghene in the 1st round. The linebackers are improved and the additions of Lawson and Van Noy should bolster what was an anemic pass rush (only 23 sacks last season).

Where Newton and the Patriots can do damage is with the backs out of the backfield. I expect Miami’s secondary to put Howard on Edelman but this looks like a James White type of game. He and Burkhead should be able to make some noise in the passing game, which could loosen things up for the receivers. Brian Flores said they’ll try to keep Newton in the pocket, if he can start making plays with his feet, then things should change.

The Patriots run defense is the big question mark for the defense in 2020. Last year they were a deceptive 6th in the league allowing 95.5 yards per game. But they weren’t anywhere near a top 10 run defense. After losing Danny Shelton, they replaced him with Beau Allen who is on IR. And losing four of their top four linebackers leaves questions.

The Dolphins have a new offensive coordinator, Chan Gailey who is more run-oriented than Chad O’Shea. But installing a new system with four new starting offensive linemen is a tough one to judge since there hasn’t been any preseason. But they added punch with Jordan Howard and Matt Breida, they won’t be led by Fitzpatrick in rushing this year.

With younger inexperienced linebackers, Josh Uche, Anfernee Jennings, Chase Winovich counted on to play big roles this year, veterans Ja’Whaun Bentley, John Simon, and Brandon Copeland will have to lead the way. Those young guys can play, but it may take a while for them to get comfortable out there. Look for Miami, even with a new unit along the OL to run the ball well.

The Miami passing game with Ryan Fitzpatrick picked the Patriots apart in the regular-season finale last year. DeVante Parker got the better of Stephon Gilmore on that day, and he’s joined by Preston Williams and Isaiah Ford in the slot. Prior to being injured last year, Williams was being targeted more than Parker. Mike Gesicki is a good receiver at tight end, but Durham Smythe will get more reps as he’s the better blocker. Albert Wilson and Allen Hurns opted out.

The secondary is the Patriots’ strength. Gilmore is the reigning Defensive Player of the Year and he’s ably backed by J.C. Jackson, Jason McCourty, Jonathan Jones in the slot as well as Joejuan Williams who has the size to match up well with the tight ends. The pass rush will be without Collins, Van Noy, and Hightower, so they’ll need other guys to step it up.

As always when facing him, which Fitzpatrick shows up? The one who took the Patriots to the woodshed in Week 17 or the one who connected on only 11-21 for 89 yards 0 TDs and 3 INTs in Week 2? Unless the run defense completely falls apart, the secondary ought to give the Patriots the edge here.

This is one area that is the biggest unknown for both teams entering Week 1. Those guys really need the preseason games for the live tackling and running down the field and seeing the plays unfold in front of them.

Expect to see some big plays on STs league-wide early in the year, but I expect former STs coach Belichick to have the players ready to go.

Nothing is harder to predict than a Week 1 game. Add into the equation the lack of spring/summer workouts and no preseason and it is doubly more difficult. The Patriots have a new QB and will no doubt be operating an offense that is different from what we saw with Brady. They’ve done this before, and will certainly change things to suit Cam Newton’s strengths. Likewise, Miami has a new offensive coordinator, Chan Gailey who will probably make them more run-oriented. There is a huge factor in the unknown here.  The other day I said that Monday will be “Over the Top …Overreaction Monday” regardless of how the game turns out. And with that in mind, don’t read too much into the game, it is Week 1 of a season that has been turned on its head.

Get the Running Game Going – The Patriots will attempt to establish the run with Michel and Burkhead with some Newton and White mixed in. Will we see any J.J. Taylor? I doubt it on Week 1 but never say never. The running game will open up play-action passing and allow Newton to make plays with his feet.

Get Newton A Comfort Level in the Offense – We all have to remember, that Newton has been here less than two months. He’s still getting the chemistry with his receivers down, and once that happens, the offense should be okay, despite the question marks at wide receiver. It will be interesting to see if he tries to get the rookie tight ends involved in the passing game early. He had a great one with Olsen in Carolina and there is a lot of upside with Asiasi.

Put the Miami Offense (Fitzpatrick) in Obvious Passing Situations – The run defense for the Patriots is a weakness (on paper) until we see something different on the field. With the secondary the strength of the team, the game plan defensively has to be to force Fitzpatrick to beat them through the air.

This is the first game that is going to be a rock fight and expect the season to be full of them. This is a young revamped roster and unlike other years, they are going to have to claw, scratch, and fight to come out on top. Playing at home in cool late summer weather, the game-time temps are supposed to be 72 with rain showers, is a big difference from 90 with high humidity. In a summer of uncertainty where we weren’t sure we’d even see a football season, Bill Belichick will have the team ready to play.  Patriots 21-20