2 years ago at 7:30 am ET
Follow @SteveB7SFG
Posted Under: Patriots Commentary 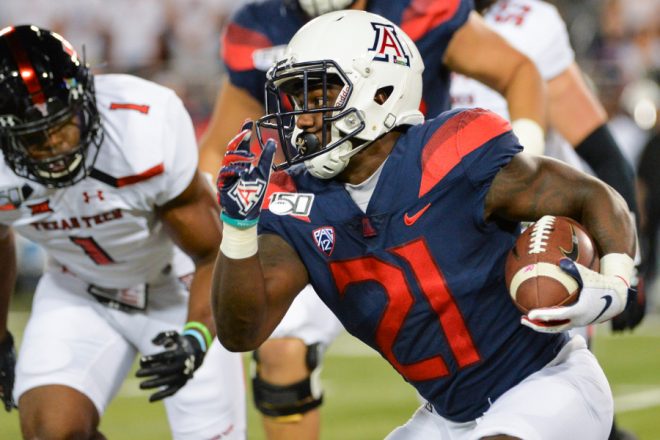 Despite the running back position being arguably the deepest on the team, the Patriots signing of Arizona running back J.J. Taylor as an undrafted free agent rookie after he didn’t hear his name called during the recent draft was a cause for excitement.

Two reasons why he may have gone undrafted were Taylor’s size, he’s just 5’5, 185 pounds, and the fact that he didn’t test well athletically this spring at the NFL Combine. But forget that, if you turn on the tape, Taylor reminds the viewer as a human joystick and has tons of upside. So, even with the odds stacked against him, competing in a very deep running back position, he’ll be one of the more intriguing players to watch this summer at the Patriots training camp.

In 2019, Taylor rushed for 721 yards averaging 4.9 yards per rushing attempt and caught 32 passes for 289 more.  In 2018, he averaged 5.6 yards per carry and totaled 1421 yards rushing with six touchdowns. He was also Arizona’s primary kick returner.

He is a much better receiving threat than his stats would indicate, it was an area where Arizona probably didn’t get him involved as much as he should have been.  His emerging threat as a receiver is somewhat offset by his smaller catch radius and height due to his size.

But because of his small size, his center of gravity is low and he’s able to maintain his balance after contact because of that is difficult to bring down. He’s also able to run nearly invisible behind his larger blockers. Taylor isn’t afraid of contact and does well between the tackles.

He has good vision and has the agility and burst to see an opening and shoot through the gap into the second level. His lateral agility, and the ability to make defenders miss will immediately remind fans of Dion Lewis.

Taylor, because of his size will be looked on as a liability in pass protection, but it is an area that he did well in while in college. But it will be an area to watch as the Patriots put great stock in their running backs having the ability to protect the QB. Taylor is quicker than fast, so he won’t have that homerun ability if he gets to the second level, but he is electric with the ball in his hands.

Because of his agility and the ability to change directions quickly, he’ll be a mismatch in the passing game when isolated on a linebacker who will have a tough time keeping up with him. Taylor has soft hands which should immediately on display when he’s out in the pattern in training camp. And despite his smaller size, he demonstrated good leg power and always seems to fall forward.

With the Patriots always using a running back by committee approach, Taylor could fit right in as a change of pace, receiving back who is versatile enough to factor into the running game. However, with James White, Rex Burkhead, Damien Harris, and Sony Michel already ahead of him on the depth chart, it is going to be a very difficult spot for Harris to be in to crack the 53-man roster.

Is it impossible? Far from it, but the odds are stacked against him at the start. But with the inevitable injury bug possibly playing a big role this summer, especially since players didn’t have any spring OTAs or minicamps to get into the flow with, it is a factor to be considered. Michel is still recovering from offseason surgery and could possibly begin training camp on PUP. And Burkhead has had a history of playing very well but having a plethora of injuries that have limited his availability.

The kick return game could be an area where Taylor can cement himself a roster spot for 2020. But he’s bound to be a fan favorite once the team hits the field. Watching him stop, start, and change direction will immediately remind fans of Lewis.

At a minimum, the Patriots will probably try to find a place for Taylor on the practice squad for 2020, then with Burkhead and Brandon Bolden (special teams standout) up for new contracts, he’d be a much better bet to stick on the roster. But by no means close the book on him this summer.

He’s going to be fun to watch.

By: Robert Alvarez
Patriots defensive lineman Lawrence Guy is nominated for the NFL’s 2022 Walter Payton Man of the Year Award for community service work.
6 hours ago

By: Ian Logue
Monday night's game in Arizona is obviously an important one for the New England Patriots, but it may end up being a critical one for…
15 hours ago