As the team cut down to their final 53-man roster, there were some eyebrow-raising decisions, most notably their current situation at kicker. The club cut both of their place kickers on Saturday, with both 5th-round pick Justin Rohrwasser and Nick Folk each jettisoned from the roster.

The two had been involved in a battle as things came down to the wire during training camp and all indications had seemed to be favoring Folk, who had appeared to be the more consistent player. Instead, neither player survived the initial cuts, although it’s entirely possible (and likely) that will change in the coming days depending on how things shake out.

Should Rohrwasser clear waivers, he could be added to the practice squad. From there, it would be hard not to believe that despite being in limbo as the team continues putting their roster together, Folk may be the player who we’ll see during the early portion of the season. His return will likely coincide with an eventual roster move to open up a spot for him.

Meanwhile, this year’s group of receivers won’t wow anyone on paper but it’s interesting that Damiere Byrd’s solid play ultimately earned him an opportunity. This is now a young group behind Julian Edelman, who is now the elder statesman at 34-years old. But after that, it’s Byrd (27), followed by second-year receivers Jakobi Meyers (23), N’Keal Harry (22) and Gunner Olszewski (23) who round out the five receivers in this year’s receiving corps.

Another area to watch is going to be linebacker group, who will likely be a work in progress this season. With the departure of Jamie Collins and Kyle Van Noy via free agency, as well as Dont’a Hightower opting out for 2020, it’s a good opportunity for some new players who will find themselves with plenty of reps this season to establish themselves. 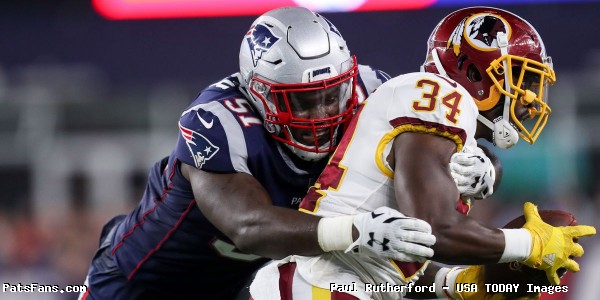 This will hopefully be Bentley’s year to shine for the Patriots’ defense.

This year’s group includes Ja’Whaun Bentley, Shilique Calhoun, Anfernee Jennings, Brandon Copeland and Josh Uche. Bentley is certainly an interesting player given the promise he’s shown in the past and he’s clearly earned the respect of his teammates after recently having earned his way up to starting 2020 as one of eight team captains for the Patriots this season.

The secondary is a terrific group, with experienced players Stephon Gilmore and Jason McCourty anchoring this unit, while J.C. Jackson, Jonathan Jones and Justin Bethel round out this bunch. Jackson will be a player to keep an eye on as he improved a lot over the course of last season and many believe this could be a big year for him.

That covers 16 players, here are the remaining 37 names as we rundown the other positions:

There will likely be some changes before the weekend’s over, but if nothing else, it’s a sign that we’re that much closer to the start of the 2020 NFL season. After what’s already been a long year, it definitely can’t get here soon enough.