With the Patriots hitting the field for the first time on Wednesday as their 2020 Training Camp gets underway, here are some thoughts now the football is back.

1) The safety position remains one that should be on everyone’s radar as training camp gets started, with Paul Perillo of Patriots.com pointing out that newcomer Adrian Phillips was the first player on the field for the team on Wednesday.  Given the fact Patrick Chung opted out of the 2020 season, the opportunity is there for Phillips to quickly establish himself and potentially earn a role in New England’s defense for the coming year.  He’ll face some good competition in rookie Kyle Dugger along with Terrence Brooks, but the fact he was the first guy out there makes a statement that he’s here to work.

2) Meanwhile, the linebacker position remains a big question mark, especially considering that nearly none of the starters are coming back this season.  Between the departures of Kyle Van Noy, Jamie Collins, along with Dont’a Hightower opting out, it’s suddenly a group with no where near the talent of the unit they had in 2019.  Looking at the current guys on the roster, which includes players like Josh Uche, Brandon Copeland, Anfernee Jennings and Ja’Whaun Bentley, it’s obvious that Bill Belichick has his work cut out for him.  How it plays out will definitely be one of the biggest storylines of the 2020 season.

3) One thing I wonder about is how this group of receivers will look this season compared to years past.  We know what Julian Edelman brings to the table, but I wonder if both Jakobi Meyers and N’Keal Harry will each find themselves with more productive years with either Cam Newton or Jarrett Stidham under center.  With the pressure of drawing Tom Brady’s ire no longer a factor, this will be something to watch since both players were known for their speed and athleticism in college and it’s easier to play fast when you’re able to get out of your own head and I wonder how much of that played a factor last season.  We’ve seen flashes of potential from both and it’s going to be interesting to see if the two become different players heading into year two.

4) As for the quarterbacks, that “battle” should be interesting. While training camp will be a good opportunity for both Newton and Stidham to get their team prepared, I’m really curious to find out how Newton responds to adversity.  Mental toughness hasn’t been his forte in recent years, with the former Panthers QB seemingly falling apart when things got tough in Carolina.  Imagine Newton throwing a pick-six in a Super Bowl as his team goes down 28-3 heading into the locker room at half time.  It would be hard to have the same confidence that he would have brought his club back.  There are always stretches each season where things get difficult and Newton has had a tendency to hang his head and seemingly shut down.  It’s doubtful that will fly here and I wonder if that’s part of what kept him from finding a home while he was a free agent. 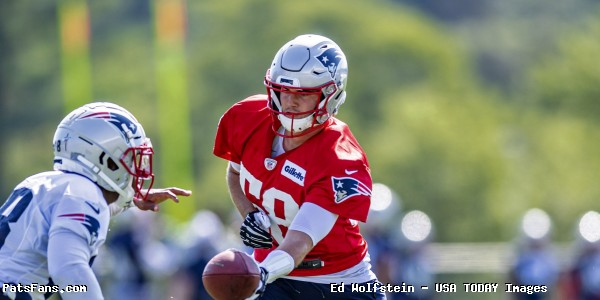 5) Speaking of mental toughness, Stidham is facing a similar test.  His ability to take Newton’s arrival in stride seems to have gone well so far, but it’s hard to imagine that he’s not a little disappointed.  After coming out of draft weekend with the club not having taken a quarterback, it appeared the starting role was his for the taking.  Until, of course, he became a victim of bad luck after Newton fell into their laps with little financial risk and a ton of potential.  If Newton doesn’t live up to it or falters during the regular season, Stidham could find himself with an unprecedented opportunity to solidify his future as a starter.

Think about it.  If Stidham goes out in camp and makes it where it’s just a matter of Newton’s athleticism and experience that edges him out, that’s a win.  For a second-year player to have competed that hard against an NFL veteran and former MVP, that would certainly be telling.  Now it’s just up to him to remain steady and solid through camp.

6) Perillo pointed out that rookie kicker Justin Rohrwasser looked massive.  At 6’3″, 230lbs, he reportedly was wearing No. 55 and at that size, it caused some actual confusion about whether or not he was John Simon, who also wears that number.  That little tidbit was funny to see and either way, he’ll obviously be someone we’ll want to keep an eye on as the Patriots try and solidify their kicking game heading into the season.

7) Sony Michel isn’t helping his case after postponing surgery for an apparent foot injury that will seemingly sideline him through camp.  Michel’s critics still give him little credit, with the former Georgia standout having put together a pretty good resume during his time in the league.  When he’s had a good offensive line to run behind, he’s been effective and he’s been terrific in the open field.  Like the receivers, with a new quarterback, I wonder if he could finally emerge as a pass-catching back given that he finished his collegiate career with Georgia having caught 64 passes for 621-yards and six touchdowns.  Unfortunately, thanks to this setback, all the reps he would have had leading up to the season will now be going to other players.

8) Hearing that David Andrews is back was definitely encouraging and he was reportedly present Wednesday.  The team lacked some nastiness inside last season and Andrews is a player that really has carried the interior of New England’s offensive line.  It’s a bit of a surprise that a player coming back from lung problems didn’t opt out given the damage the coronavirus has been known to do from that standpoint.  But Andrews appears unphased and should everything work out, the Patriots are certainly the better for it.

Overall, it’s simply good to have football back as we get a little closer to finally having a little bit of normalcy.  With things starting back up at Gillette after a long offseason, it should definitely be fun to see how it all plays out in the coming weeks.