Good morning, here is your Sunday Patriots news 02-02 and AFC East notes this week. And Happy Groundhog Day. If Pat the Patriot doesn’t see his shadow…then we have six more Super Bowls in the next 20 years.

Game Day! Enjoy the Super Bowl today as it is time to enjoy some great food, company,  and hopefully a great game today. I like the 49ers defense to hold on for a close win but this could easily go either way.

Tom Brady – sent the Twitterati into a tizzy with a black and white photo of him walking into/ out of (?) Gillette Stadium that was published on his Instagram account. And then, once again the amateur psychologists on social media set out trying to interpret what the meaning was…ugh please make it stop. March 18 is still nearly six weeks away.

Later, Brady spoke to the McCourty twins and had this to say: “Bro, I’m 42 years old, one of the oldest guys in the league, wanted to remind people that the best photos are in black and white.’ That’s all it was, bro. Black and white. It’s a classic — like, I’m the classic: Tom Brady, black and white. Put it all together, I’m still out here doing it.”

Brady Pt. 2 – I wrote a piece this week for SOFREP.com, which is a military site on if the TB12 method of training would be of benefit to Special Forces soldiers, to help them prepare, perform, and recover faster and more efficiently. And if they can continue the work to keep themselves more pliable while deployed. I went to the TB12 Sports location in Foxboro and worked with the staff there as well as interviewed them and am a convert. Those principles are now part of my daily routine. You can read it here:

Michael Bennett – The Patriots traded for Bennett during the offseason last year but then traded him in midseason. During Super Bowl week, Bennett dispelled rumors that he departed on bad terms with the team.

“Nothing happened with me and Belichick,” Bennett said. “It’s just I didn’t fit into the [scheme]. They changed to the whole other defense. It was a defense that people hadn’t seen before, really, honestly. It was a defense where you had one defensive lineman, three linebackers down.”

Of course, he was asked why the Patriots traded for him if they didn’t plan to use him at defensive end, and he said that he believes the team’s defensive plan was altered after the season got underway.

“I think things change,” said Bennett. “I think Belichick, he could start off with one mindset and then look at what’s better for the team.” He took all the fun out of that one…

Goodell Not Done With Taping Investigation:

If you thought the NFL’s investigation into the taping incident in Cincinnati would be over now, you’d have been in the majority, in terms of a train of thought, and you’d also have been very wrong. After the incident on December 8, the tape in question was in the NFL’s hands a day later. Now another 56 days have passed and the league still isn’t finished with it.

Commissioner Goodell was asked by Ben Volin of the Globe what was taking so long this week at the Super Bowl media gathering since it was an open and shut case. His answer wasn’t surprising considering the league’s past history.

“The answer to that (last) question is no, it shouldn’t, because our responsibility is to make sure we’re being extremely thorough (emphasis mine). We have a responsibility to 31 other clubs, we have a responsibility to fans to understand all of what happened, and make sure that something we don’t know happened didn’t happen. And so from our standpoint, we want to make sure we’re being thorough. Our team has been on it. We have been focused on this. I think it has not been that lengthy of time. We have obviously put the focus on it, but we’re going to get it right. When we come to a conclusion, we’ll certainly make sure people are aware of it.”

Considering the shoddy, preordained “investigation” that the league conducted during the Deflategate fiasco where anyone who sat through 7th-grade science class or has lived through even one northern winter knew it was weather-related, it isn’t a surprise at all. We’re not even going to get into the allegations of deflating footballs that have happened since that the league has refused to even entertain or the data they collected on air pressure that they conveniently destroyed after it was over.

Again, the definitive line here is this: “We have responsibility … to make sure that something that we don’t know happened, didn’t happen.” In other words, what Goodell is saying, that the league is moving forward once again with the presumption of guilt of higher crimes than just stupidity on the case of the film crew and the league will try to paint this in the darkest light possible.

Very early in the process of this latest fiasco, Pro Football Talk reported in mid-December that the NFL was frustrated by the absence of tying the film crew with the Patriots football operation side of the house.

“As one source explained it, there’s a sense that investigators want to make that connection, and a perception that they are showing frustration when unable to tie the video crew to the football employees,” Florio wrote. When someone wants to make a connection, it ceases being an investigation, much like the Ted Wells junk science crapola that was spoon-fed to the legions of Patriots-haters that were screaming for their pound of flesh.

Goodell’s statement tells you all you have to know how this is going to go. 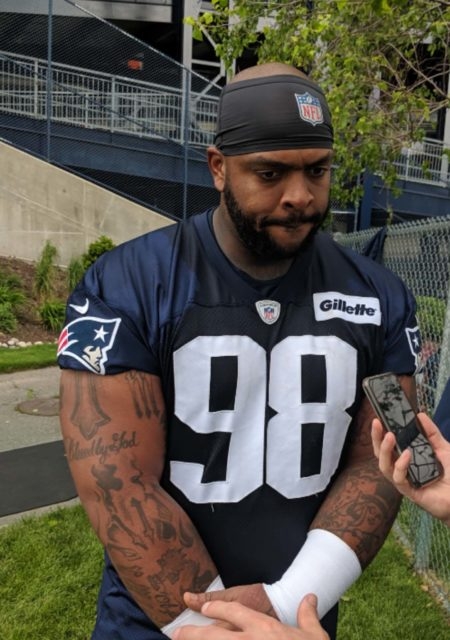 Pennel Unhappy With the Patriots “Lack of Transparency”:

The Patriots signed free agent defensive tackle Mike Pennel early in the 2019 offseason and it was originally thought that he’d play a big role in the run defense, something they struggled with at times this year. But his playing time was decreased as the preseason wore on and he was cut.

Pennel wasn’t happy about the way things were handled according to NESN’s Zach Cox who was first to report this.

“I’ll definitely keep the particulars of that to myself,” Pennel said. “But it was just with how the preseason was going and everything like that, me being a veteran, I kind of knew what was going on with the (decreased) reps and everything like that. I didn’t really understand what was going on and didn’t really get any answers. So after that point, it was a little bit of confusion, a little bit of relief when I got cut. But I’m just glad to be somewhere with a lot more transparency.”

Bills Sean McDermott a Finalist for NFL Coach of the Year:

The Buffalo Bills are (this was written on Friday night) hoping to hear that Head Coach Sean McDermott will be named the NFL Coach of the Year which will be announced on Saturday night.

It is generally thought that John Harbaugh will take that honor, however, in his three seasons with the Bills, McDermott has taken them to the postseason twice, no mean feat considering the postseason drought the team suffered since the 1990s.

“It is an honor,” McDermott said in an interview with”One Bills Live” this week. “But, like most of the awards I think it is truly a team deal and you don’t get that recognition without winning games. And, you don’t win games without a team and a great staff and a great building. I am much appreciative of that and I think it is great for our team and great for Buffalo.”

“It has truly been a team effort,” he added. “We have been through ups and downs and that is part of the journey. We have enjoyed that journey but it is satisfying to know that our players have gotten the recognition that they deserved to this point and they are going to get more and our staff. It is great to see the Buffalo Bills back on the map.”

Brady to the Dolphins Still? Makes No Sense to the Owner:

The Miami Dolphins are in the midst of rebuilding and team owner Stephen Ross, in addressing the Tom Brady to the Dolphins rumors says it doesn’t make any sense. And we’d agree with that.

“I hear he’s going to be a free agent but we’re not allowed to talk to him until March,” Ross said on Friday. “I don’t know why he would want to come to Miami as we are a rebuilding team.”

With Ryan Fitzpatrick remaining in 2020, and the fact the team fired OC Chad O’Shea because it wanted to get away from a Patriots style of offense, why would Miami then try to bring in the Patriots QB? It makes less than zero sense, but the rumors persist.

The New York Jets need a lot of help along their offensive line, and one player that they may go after once free agency starts is Patriots free agent Joe Thuney.

Tony Pauline of Pro Football Network believes it is a great fit for both sides. “I heard nothing from Jets sources but several league insiders believe the team will go hard after Joe Thuney – which makes perfect sense,” Pauline wrote.

While it certainly does make sense for the Jets to look at the 2nd team All-Pro guard as a very needed upgrade for the Jets offensive line in 2020, they will hardly be alone. Thuney is expected to draw a lot of interest across the league once free agency begins on March 18th.

“This is an extremely sad time for the entire sports community. In my 45 years in the NFL, I have never witnessed a group as captivated as the day Kobe addressed our team two years ago. The respect and reverence he commanded far exceeded him being a legendary player. He was a special person with an unmatched passion, intensity, and mentality toward achieving his goals.

Kobe’s determination led to a brilliant athletic career and paved the way for successes in the next chapters of his life. By bringing joy to millions of people with his extraordinary athletic ability, inspiring people to elevate the standard for anything they do or performing countless acts of encouragement, Kobe Bryant’s lasting impact is immeasurable.

I hope our collective thoughts and prayers can help provide strength to the families of all the victims of this tragedy.” – Bill Belichick on the passing of NBA legend Kobe Bryant.