3 years ago at 10:29 am ET
Follow @bob_george
Posted Under: Patriots News 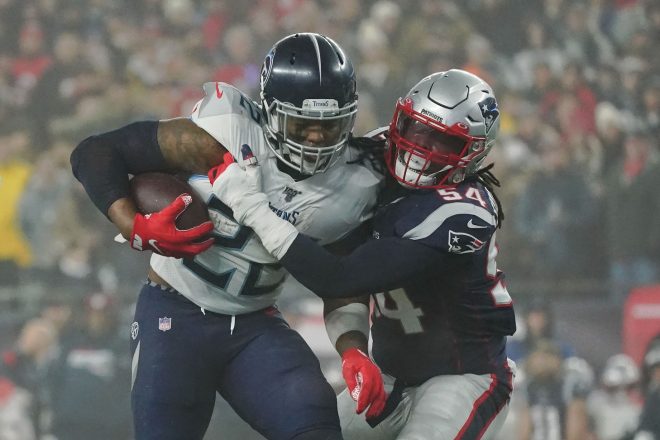 End of an era?  Save that for March when some famous quarterback’s contract expires.

It doesn’t feel like it, but it’s over.  No more football in New England until this summer.  The 2019 season came to an abrupt end on Saturday night at Gillette Stadium, as former Patriot Mike Vrabel led his Tennessee Titans to a hard fought 20-13 win over the former Super Bowl Champion Patriots, sending his charges to Baltimore to take on the top-seeded Ravens next weekend.  Derrick Henry rushed for 182 yards last night, but the Titans’ defense may give up 282 rushing yards to Lamar Jackson next week.  That’s Tennessee’s problem, not New England’s.

What is their problem is what to do moving forward.  This team turned out to be one of the worst 12-4 teams in recent NFL history.  This season was clearly mischaracterized by the ridiculously easy early first half of the season, where the Patriots went 8-0 and beat teams that woebegone UMass might have given a good game.  Once the good teams started lining up on the opposite side of the ball, things began to change.  The last two games, home losses to Miami and Tennessee, revealed to the pro football world what the 2019 Patriots really were.  Key injuries, key retirements, and a general misjudging of the talent on this team all combined to lead to their early playoff exit, something not seen around these parts in exactly a decade when Baltimore came into Gillette Stadium and blew out the Patriots, 33-14 in the last Wild Card round game this team has played until last night.

That said, here are the five main reasons why the team crashed and burned and saw their Super Bowl championship come to an end last night.

This was a bad year for the offensive line, period.  David Andrews was lost in training camp for the season due to blood clots in his lungs (more on him later), which got things off to a bad start.  But basically, this unit never jelled at all.  For much of the season, the line started guys like Ted Karras, Marshall Newhouse and Jermaine Eluemunor.  Starting tackles Isaiah Wynn and Marcus Cannon missed significant playing time.  Wynn came back for the Dallas game, but the team went only 3-4 after he came back.   Cannon had a substandard season at right tackle when he did play.  Karras is simply no Andrews, and Newhouse and Eluemunor were stopgap fill-ins, nothing more.  Except for a few nice runs by Sony Michel and Rex Burkhead here and there, this line had a bad year.  Tom Brady’s pass blocking protection this year was mostly non-existent (his season passer rating of 88 was his lowest since 2013).  If Brady either retires or winds up leaving the Patriots, one has to wonder if the bad performance of the offensive line will be a major factor.

#4 – A vastly overrated defense, totally exposed in the end

They were being held up there with the 1985 Bears, 2000 Ravens and 2002 Buccaneers as one of the best one-season defenses in NFL history.  They were 8-0, and fantasy owners who had the Patriot defense (Yours Truly included) enjoyed astonishingly high numbers.  Then along came Lamar Jackson and everything changed.

Granted, Jackson has made a lot of defenses look like a combination of matadors, young guys suddenly looking old as dirt, and befuddled dopes who would have problems stopping a high school option offense.  But the Patriots always seemed to have an answer for everything.  They were powerless to stop Jackson, but that soon begat getting shredded at home by Patrick Mahomes and Ryan Fitzpatrick, and bludgeoned by Mark Ingram, Ezekiel Elliott and Derrick Henry.  They could not stop a final scoring drive at home from Miami with a first-round bye on the line.  All-Pro Stephon Gilmore suddenly looked like 1997 top draft pick Chris Canty when trying to cover Devante Parker in that hideous regular season finale.

Explaining the offensive line was easy.  Explaining the collapse of the defense isn’t.  Granted, the unit played okay Saturday night and allowed only 13 points, but stopping Ryan Tannehill (previously 0-6 lifetime against the Patriots) is like Dietrich Wise or Adam Butler trying to stop a six-year old kid from entering a candy store.  Henry won the game for Tennessee Saturday night, not Tannehill, and they even allowed some Harvard grad named Anthony Firkser to catch a touchdown and make a key third down catch late in the game.  There was no clutch in this group down the stretch, and all the big plays that are usually made were not made this year.

#3 – Brady cannot totally blame his receivers for lack of chemistry

Late in his career, the Celtics allowed the late, great John Havlicek to report to training camp late.  He simply needed more rest at his advancing age.  Problem is, the last two Celtics teams he played on were knocked out of the playoffs by Philadelphia, and failed to make the playoffs in his final season.  Was Havlicek reporting late the reason why?  Certainly not, as the front office made one bad trade after another and by 1978, the team was so bad that perhaps Red Auerbach could be forgiven if he yelled “Russell is not coming through that door!  Neither is Heinsohn, Cousy, or anyone named Jones!”

For the last two offseasons, Brady has missed all of the voluntary OTAs.  He is spending more time with his wife Gisselle and his children, consorting with his personal trainer, Alex Guerrero, and working with his personal quarterback coach, former Red Sox lefty reliever Tom House (whose only other claim to fame is catching Hank Aaron’s 715th career home run in 1974 in the Atlanta Braves bullpen).  At Brady’s age, you have to figure that he’s earned it.  He’s the GOAT, and he doesn’t need all this voluntary offseason stuff that the younger, more mortal players need.

But as the Ghost of Christmas Past told Ebenezer Scrooge in one of the many versions of A Christmas Carol (this is the version that stars George C. Scott as the Humbug Homey), “You have shown me what you have gained!  Now I will show you what you have lost!”

Brady gains valuable family time, and is totally comfortable with Guerrero and House, as most of us all know (especially if you watched that Facebook feature Tom Vs Time two years ago).  But his not attending the OTAs meant that he didn’t get a chance to build a rapport with Josh Gordon, Phillip Dorsett, Jakobi Meyers, N’Keal Harry, Gunner Olszewski and Matt La Cosse.  In past years, this was why a Wes Welker could be cast aside and a Danny Amendola or Julian Edelman could be groomed to take his place.  By not attending the OTAs, Brady never got that time in.

As a result, in most of the games played, all defenses had to do was account for Edelman and James White, and that was that.  Brady was never on the same page with anyone other than those two veterans.  You can’t count Antonio Brown in this discussion, as he was only here for one week.  But his choosing to spend time away from Foxborough in the offseason did have some repercussions.

#2 – Injuries to Andrews and Develin were not overcome

Andrews, as previously stated, had blood clots in his lungs and was declared out for the season in training camp.  That left all his responsibilities to Karras, and the dropoff was noticeable.  The center does a lot more than snap the ball.  He calls out blocking assignments and sets the line for the next play.  Of course, he also has to be a good blocker.  In both areas, Karras simply did not account for the loss of Andrews.  Dante Scarnecchia had plenty of time to develop either Karras or some other player to at least hold down the fort in Andrews’ absence.

Develin’s injury may have been even more damaging.  His lead blocking for Michel and Burkhead might be seen by some as overlooked, but not by those who really know the game.  Linebacker Elandon Roberts turned out to be the replacement for Develin as Jakob Johnson also went down with an injury.  Roberts was much like Karras in that he did okay but was clearly no Develin.  Roberts was called upon to try and convert a third and one on Saturday night but was stuffed for no gain.  He did crack off some nice lead blocks, but the failed first and goal at the one exposed the absence of Develin at a time where a touchdown was badly needed but a field goal was all they got.

#1 – Gronkowski was never replaced, even slightly

Rob Gronkowski retired last March, and kept true to his word.  Several experts predicted he would come back around November, but he never did.  He is still trying to become a comedian on the Fox pregame show rather than trying to surprise Patriot Nation with a late return to the Patriot lineup.  He is done with football.  Period.

The Patriots did not draft a tight end.  All the Patriots did was to bring in La Cosse and ancient former Patriot Ben Watson, who had to be talked into coming out of retirement.  Even Jacob Hollister was cast adrift, now catching tosses from Russell Wilson for the Seattle Seahawks.

Brady missed Gronk big time.  Yes, the Patriots did win Super Bowl LI with that biblical comeback without Gronk in the lineup.  But over an entire season, the Patriots had no Martellus Bennett this year.  Without Gronkowski or Bennett to worry about, defenses double teamed Edelman with no qualms or trepidations.  They didn’t worry about Dorsett, Harry or Meyers.  This all combined to throw Brady off kilter and reduce the Patriot passing attack to something merely mortal.

Patriot Nation certainly knew what it had with Gronkowski.  Sometimes Bill Belichick can get away with personnel magic, but he couldn’t this time.  Both Brady and Gronkowski made it to the NFL Network’s Top 100 list at their respective positions (as did Belichick).  It could be that Belichick didn’t restock on tight end because perhaps he thought Gronk would come back in November.  Didn’t happen.

Add it all up, and it’s someone else’s turn this year.  Any talk about the end of the dynasty can wait for some other day.