3 years ago at 6:50 am ET
Follow @SteveB7SFG
Posted Under: 2019 Patriots Regular season 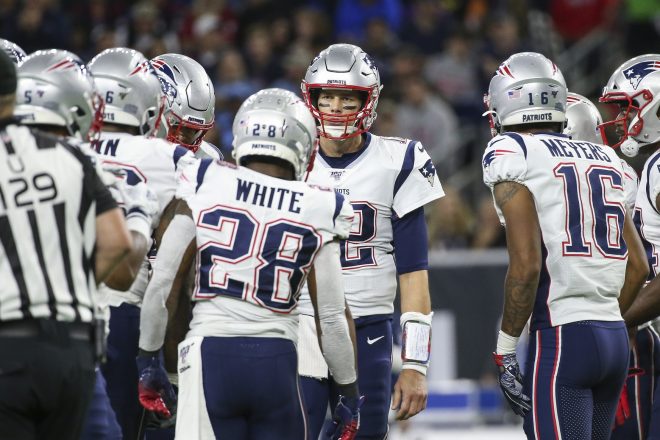 One more for the road. The Patriots play their last regular-season road game of the 2019 schedule with a trip to Cincinnati to take on the Bengals. It is the first 1:00 p.m. start for the team in two months.

Several weeks ago before the Baltimore game, we had this one circled as a game where several players may get a respite and see a reduced workload (Julian Edelman) and maybe see a lot of a younger player like Damien Harris and Joejuan Williams. Now, after losing three of five, that isn’t going to happen. This game has become important for holding off  Kansas City for the #2 seed and the all-important bye. And to hold off the Bills in the division.

This week’s game will be broadcast by CBS and can be seen locally on WBZ-TV Channel 4. Andrew Catalon will handle play-by-play duties with James Lofton as the color analyst. Amanda Balionis will work from the sidelines. The game will also be aired on the Patriots flagship radio station 98.5 The Sports Hub with Bob Socci and Scott Zolak on the call, produced by Marc Capello.

The Patriots and Bengals have met 25 times since Cincinnati entered the league in 1968 and the Patriots hold an overall 16-9 all-time edge. Of course, the most famous matchup was the “we’re on to Cincinnati game…which just happened to be after a loss to the Chiefs.

The Patriots have won the last two meetings including a 35-17 win in Gillette the last time the two teams met. The last game in Cincinnati was a 13-6 win for the Bengals back in 2013 in that monsoon game where neither team was able to do anything offensively.

The Patriots running game had an awful outing last week, gaining 94 yards against the Chiefs 31st ranked run defense. Kansas City entered the game allowing 141.3 yards per game and then dominated the Patriots upfront. By the end of the game, the Chiefs woeful run defense was preening and talking about how they hope to see the Patriots again in the playoffs… that is bad.

Enter Cincinnati’s run defense. If you thought the Chiefs were bad, the Bengals, have been worse. Cincy’s porous run defense is dead last in the NFL allowing a whopping 156.7 yards per game on the ground. This should be a mismatch…right?

The offensive line has to open some holes this week for Sony Michel, James White, and Rex Burkhead. But honestly, I’d look at giving some snaps to Brandon Bolden, who has been effective whenever he’s been tasked and Damien Harris, giving Sony a week off. Will they do either of those? Nope. Will the Patriots run roughshod over another sieve run defense? While I’m not from Missouri, …show me.

The Patriots passing game has consisted of Julian Edelman, James White, and a big question mark. That makes the opposing defense’s job a heckuva lot easier. They need both Phillip Dorsett and Mohamad Sanu to step up (sounds like a broken record at this point). Tom Brady’s pass protection has been shoddy and inconsistent for much of the season.

Cincinnati’s pass defense hasn’t fared much better than their run defense and is 19th in the league. Their corners, William Jackson and Darqueze Dennard are okay but not special. The closest thing to a ballhawk in the back end in safety Jessie Bates with three interceptions. Their pass rush has a couple of names to watch. Carlos Dunlap and Geno Atkins, although they haven’t accounted for a bunch of sacks, just 21 as a team.

Again, on paper, this seems like a mismatch but this time, I do give the edge to the Patriots as Tom Brady can find a way to manipulate this secondary….if he has time to throw. Atkins is a big, disruptive inside presence. He can do damage and will be going against the #3 center in James Ferentz. Dunlap and Sam Hubbard are guys who can bring the pressure from the edges. Protection is the key here.

So, Josh McDaniels, are the Patriots going to get N’Keal Harry more involved in the passing game anytime soon? This would be a prime week to do so. It isn’t exactly like Dorsett and Sanu are lighting it up and not allowing him a chance to play…throw him the damn ball this week.

Next up the Bengals offense:

The Patriots run defense has been rock solid and it all begins with the outstanding work of Lawrence Guy and Danny Shelton inside. They’re both doing a great job of penetrating and holding up the line of scrimmage allowing the Patriots linebackers to fly up and make plays.

Cincinnati has a couple of talented running backs in Joe Mixon and Gio Bernard, but when they’re constantly playing catchup, it has been difficult for them to stick with the running game, which is why their paltry 85.8 yards per game average is a tad misleading. Mixon has gained 789 yards and six touchdowns on the ground this year and is capable of producing a big game.

Look for Cincinnati to get Mixon going this week in an attempt to stick close and dictate the pace and tempo of the game. But this is a matchup the Patriots can and should win with the play of the front seven which has been very good all season.

The Bengals passing game has Andy Dalton back under center and he gave the team, their only win of the season over the Jets. He’s kept games close, and will try to once again. The problem with their passing game sounds like the Patriots. He has Tyler Boyd, who is having a very good year (73 catches, 833 yards, 3 TDs), Gio Bernard out of the backfield and a not a lot elsewhere. John Ross is their speedster and is back after spending time on IR. Bengals QBs have been sacked 43 times for 309 yards this season.

The Patriots pass defense has been excellent this season. Expect Boyd to get matched up with Stephon Gilmore this week and Ross to get watched by Jonathan Jones or J.C. Jackson. Bernard will bear watching out of the backfield, he’s a very good weapon there. But look for the defense to be aggressive in this one and try to get after Dalton to force the issue and some turnovers.

The Patriots special teams has Nick Folk back as their kicker. While he had a field goal blocked last week, that was a rare failure of the blocking up front. Jake Bailey has been outstanding punting this season and the coverage units have been terrific. Nate Ebner blocked the Patriots’ fourth punt of the season.

Cincinnati has the reliable Randy Bullock who has been perfect on PATs and has made 21-25 field goal attempts. Kevin Huber had done a very good job of punting. Like NE, the Bengals haven’t generated much in way of the return game. Look for the Patriots to try to make it five blocks this season and give their struggling offense a short field.

The Patriots are looking to improve to 11-3 and now this game becomes a must-win, there are no more alibis left to give if they want a bye and a guaranteed home game for the division round of the postseason.

Protect Brady and Get Others Involved in the Passing Game – The Patriots can’t be a two-man passing team in the last three games and into the postseason. That means other players have to step up and the coaches have to get others involved. This is a prime week to make that happen.

Getting Harry, Dorsett, Sanu, and Jakobi Meyers more involved in the passing game, shouldn’t be that hard, but yet here we are. It all begins with Brady’s protection but they have to start winning some battles on the line. Getting more from tight ends Ben Watson and Matt LaCosse would be a welcome sight as well. Get it done.

The Defense Should Pin Their Ears Back- The Patriots defense has been a constant bright spot all season, this week, they should feast on a Bengals offensive line who have been gashed for 43 sacks. With a limited offense, the Patriots can dictate where and when the pass rush is coming from. Look for Kyle Van Noy and Jamie Collins to be very active this week.

Turnover Time  – The Patriots are +19 in the turnover department, tops in the NFL. Cincinnati is -11, 30th in the league and a big reason they are 1-12. The Patriots defense was huge earlier in the year at getting turnovers and helping out the offense. That has slowed a bit in the second half…time to feast.

This should be a walk in the park for the Patriots who are clearly the better team. But the offensive struggles have made every game a slogfest. The Bengals are playing for nothing but pride and jobs at this point of the season. But this week is their Super Bowl with a chance to knock off the defending champs. Plus the entire filming fiasco of last week, should light a fire under their behinds. Unless the defense gets a score or a slew of turnovers, this one will remain closer than anyone wants.  Patriots  20-10

The “Knocking on Sevens’ Door” heads back home for the final two regular-season games of the season and next week is a big one with the Buffalo Bills for the AFC East.