Gameday! The Patriots are back at home to take on the Chiefs in the late afternoon game later today.

Yesterday was Pearl Harbor Day and we paused to remember those Americans who died that day as we were thrust into World War II. Today, 78 years ago, we declared war on Japan and the world changed forever.

The weather isn’t supposed to be a factor in Foxboro this week for a change and the Patriots finish with three of their final four games at home. With KC, Buffalo, and Miami on the slate, they only travel to Cincinnati to finish off the year.

Nick Folk – The veteran kicker is back with the team according to ESPN’s Field Yates. Folk suffered appendicitis and was released for Kai Forbath But after one week, and an extra point miss, Forbath is gone and Folk is back.

Dez Bryant – Is the latest contestant for “Whose Name Can We Throw at a Wall at WR?” Dez Bryant! Come on Down! Please stop with the nonsense, the team is going to bring in a guy who doesn’t know the offense and has played for two years with a month to go in the season? Ah, we’ll take the under.

Some of the tweets this week have been unintentionally hilarious. I saw two different folks begging Kraft to allow AB to return as “Patriots Nation is suffering”, sorry, but if there is one fan base that ISN’T suffering it is this one.

Bart Scott –  Is the latest NFL player that seemingly has a future in politics. Just like nearly every candidate has a preponderance to spout “facts” without checking, Scott was the latest hot take artist to firmly place his foot in his mouth (again). “They’ve (Patriots) never won when they had to go on the road!” Sounds great on tape for the anti-NE crowd. But rewind to January…AFCCG in Arrowhead. Not to mention not one but two conference title games in Pittsburgh…oops.

My Cause, My Cleats – Lots of good entries from the Patriots this season. I like all of them. But sorry, Alejandro Villanueva of Pittsburgh gets my vote with a cause that close to my heart, (and one I’ve donated to), the Special Operations Warrior Foundation.

Villanueva was a Lieutenant in the 75th Ranger Regiment and did multiple combat tours in Afghanistan. Was awarded the Bronze Star for Valor. The SOWF helps families and children of our Special Operations warriors who have been killed or severely wounded in combat. Hey Bill, there’s an Army guy worth having…just sayin’. 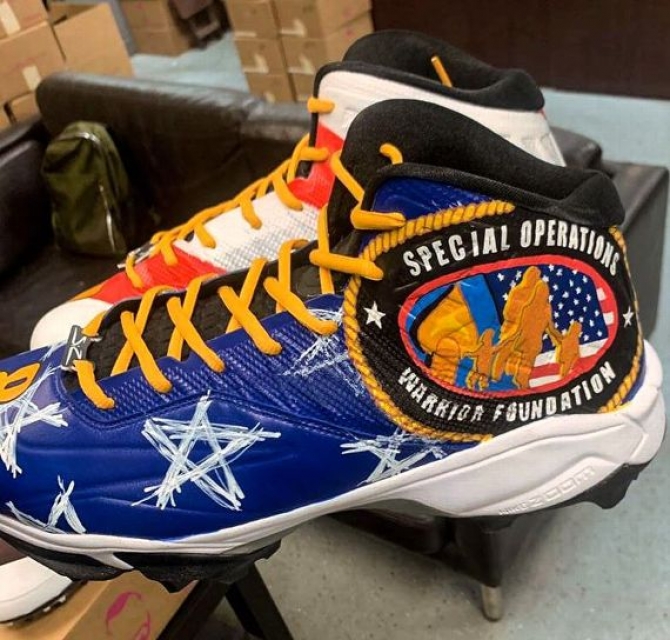 McDaniels, Caserio Already On the Hot List of Hires:

Bill Belichick has always had to retool his coaching staff and front office people seemingly every year. This spring was no exception as the team lost a slew of coaches including the de facto Defensive Coordinator and all of the defensive staff save Belichick’s own son Steve.

And although we’re only three-quarters of the way through the 2019 season, a couple of names are already surfacing on other team’s radar. Josh McDaniels and Nick Caserio are once again two of the hottest names to be mentioned as being coveted by other teams.

Caserio has been courted twice by the Houston Texans. Houston was even charged with tampering by New England this spring. Now Houston, as of last week, stated that they’re fine with having no GM and allowing Bill O’Brien to run the show as the head coach and de facto GM. Don’t believe it. O’Brien smartly deflected it as to avoid another tampering charge. Look for Houston to make another big push for his services as Caserio’s chances of landing an extension in New England are slim.

Josh McDaniels has already been rumored to be on the Dallas Cowboys’ radar as well as the Carolina Panthers who have fired head coach Ron Rivera. Rivera was always a highly thought of coach despite three winning seasons in nine years at the helm. The Dallas job would carry plenty of prestige (and no doubt a high salary) but with the meddling Jerry Jones trying to own, act as the general manager, and be the de facto head coach is not a good situation for any coach.

Tom Brady Leaving? Too Soon for That Talk:

You know the post-season is approaching when all of the talk is designed to scare the snot out of Patriots fans. “Is This the Year they Fall?”, “The Pats Can’t Win on the Road”, and now with four games to play and the team just a tie-breaker out of the top seed in the AFC, “Are We Seeing the End of Tom Brady in NE?”

Aren’t we used to this by now? It isn’t a NE post-season upcoming without a writer from the “network” trying to dig up some dirt, or in the case of this fall, writing a bunch of words without saying a single thing, or some other pseudo-controversy. Now its Brady. 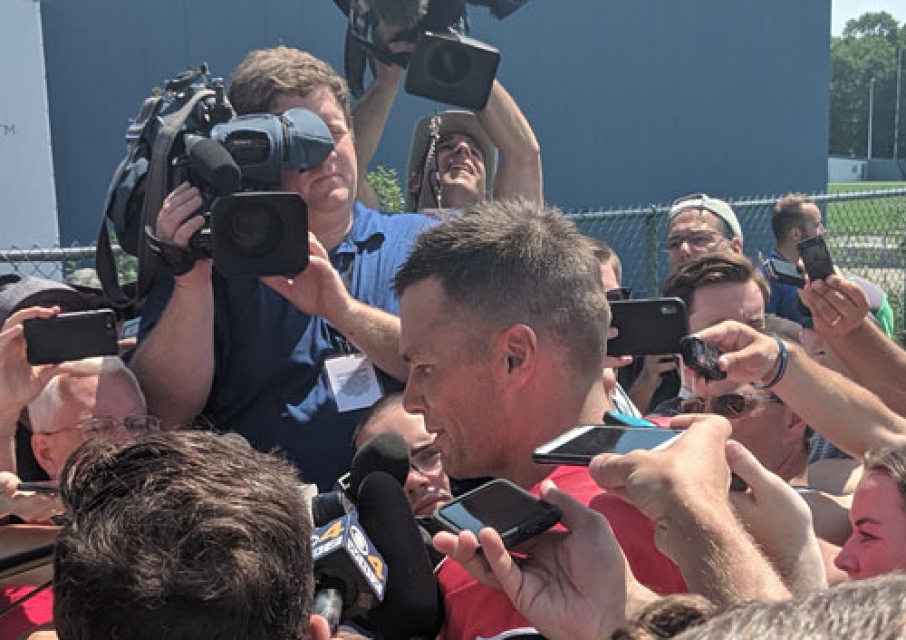 Tom Brady’s status is in doubt… something we’ve known since the spring. (SBalestrieri)

Look Brady may well be done in New England after this season, he could retire, he could become a free agent and sign to be the quarterback of the London Silly Nannies (Family Guy reference). Or he could pack Gisele and the kinder up and decide to run for political office.

Honestly, (and excuse my French), I don’t give a shit. And neither should you. This isn’t breaking news, we’ve known this since the spring.  There are four more games left to play and then the playoffs beckon. This season there are so many intriguing storylines to watch, it would a shame to be sidetracked by needless worrying over silly crap that won’t be addressed until after the season is over. The endless fodder with that is just rot.

And when the season is over, hopefully, with the team making one more trip to Miami, there will be plenty of time for the doom-sayers to sound the death knell and begin the mourning phase for the franchise. But for now, just ignore the same old BS and enjoy the ride.

NFL Schedule Week 14, Who Are Your Winners:

Bills Have a Tremendous Opportunity At Their Doorstep:

The Buffalo Bills are the NFL’s biggest secret at 9-3. Nobody has (other than in Western NY) given them much love this season. They’ve been virtually ignored as being a “fluke team from the woeful AFC East” so far. They did get a few raised eyebrows when they curb-stomped Dallas on Thanksgiving Day, but the Cowboys have been in free fall. But all of that can change today.

They have the opportunity, and the personnel to knock off the mighty Baltimore Ravens today and vault themselves right into the mix of the AFC race. That will be no easy task, but they’ll be at home in front of a loud, raucous crowd and have the defense to slow down the Ravens. If they were to upset Baltimore, it opens up a lot of different scenarios.

A Bills win with a Patriots loss sets up a game in two weeks for the AFC East crown. And coincidentally, another Buffalo win there puts them where? The #1 seed. Now, there is a ton of ifs there, but for the first time in a very long time, the Bills can control their own destiny come playoff time and actually host a playoff game.

Dolphins Staff Has Weathered the Storm :

The Miami Dolphins have played hard for head coach Brian Flores and his new coaching staff all season long in a rebuilding year. But they’ve remained competitive and won a couple of ballgames and that has the needle pointing up in Miami.

Miami’s staff is free of the distractions of whether or not they’ll be here next year and can go about the business of building a better team in 2020. Cleveland, Cincinnati, the NY Giants, Dallas and the Dolphins’ opponent today the NY Jets all face wholesale changes.

Flores is building something in South Beach, whether or not he can take Miami back up to the level where they aspire to be, will in no small way go to whether they can find a franchise QB next spring. Tua look good in teal?

Jets May Have to Go Without Bell Today:

The New York Jets have a game at home with the Miami Dolphins today. But they may have to go without their $52.5 million dollar running back Le’Veon Bell. Bell has missed practice for two straight days with an illness.

“I don’t know. They just said it was an illness. He’s sick,” coach Adam Gase said. “It’s probably the same thing that’s going on with a lot of these other teams. The biggest thing was getting him checked out and then getting him out of the building so nobody else gets sick.”

Bell has averaged just 3.2 yards per rush this season, his first with the Jets and his first without that stellar offensive line of the Steelers to run behind. Which shows how important that line is to running backs (take not Sony Michel haters). The Jets and Miami are playing today for the purpose of who has the ignominious title of being in last place in the division. Tickets are readily available.

“Well, the more you see them, the more you can get used to playing them. One of the problems with the RPO play, just in general, is just the offensive pass interference and blocking down field conflicting with the pass. So, if it’s a run, it’s no problem. If the ball actually gets thrown, like what happened last week in the Houston game – it was called once. I would say any time you run that play there’s some degree of, “Is there blocking down field or not?” Sometimes there is, sometimes there isn’t. It’s a tough call for the officials, but that’s sort of what that play – the complications of that play defensively.”– Bill Belichick being asked about how difficult it is to defend the RPO (run/pass option).