3 years ago at 8:33 am ET
Follow @IanLogue
Posted Under: 2019 Patriots Regular season

The weather at Gillette Stadium may have been miserable, but at least the fans on hand who braved the elements on Sunday got to see the Patriots take care of business against the Cowboys as they improved to 10-1 on the season.

Points were at a premium and it was New England who came away on top, beating Dallas 13-9 on a rain-soaked field in front of the home crowd. Here are some thoughts on the win.

1) Wide receiver N’Keal Harry had a fairly solid outing on Sunday, with his athleticism on display in what ended up being the key play of the game as he scored the lone touchdown of the afternoon.

On the play, Harry broke out toward the corner and twisted himself around, snatching the ball out of the air on a terrific throw from Tom Brady, while managing to keep both feet in bounds for the 10-yard touchdown.

It was a huge play for the rookie, coming two plays after Matthew Slater blocked a Dallas punt deep in their own territory and it ended up being the knockout blow as the Cowboys never reached the end zone for the entire game.

Harry was targeted 4 times with his lone TD reception but did have a couple of drops in this one, which were largely due to the elements as the ball slipped through his fingers on a couple of leaping grabs that may have otherwise been receptions in dryer weather. But Sunday was a nice glimpse of why the Patriots selected him and hopefully, it’s a sign of things to come.

2) Sunday was also a big day for fellow rookie receiver Jakobi Meyers, who stepped up big in Sunday’s win.

Meyers was targeted 9 times and finished with 4 receptions for 74-yards, all of which were first downs. He also caught 2-of-3 targets on third down, both of which moved the chains.

The rookie averaged a team-high 18.5 yards per reception and made a critical 9-yard catch during a fourth-quarter drive that led to a 42-yard field by kicker Nick Folk, which put the Patriots up 13-6 and kept the pressure on Dallas.

Overall, like Harry, it was a solid showing for Meyers and it came when they needed it most. Without receivers Mohamed Sanu and Phillip Dorsett, who were both sidelined with injuries, the two each got in some much-needed work and it was great to see both players take advantage of their opportunities. 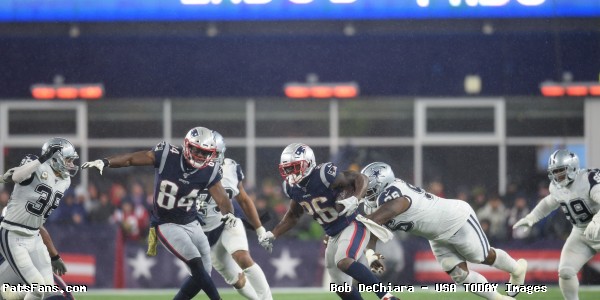 3) Much of the talk all week centered around the return of left tackle Isaiah Wynn and he didn’t disappoint on Sunday.

Brady had significantly more time to throw and even more importantly, the ground game was pretty effective all afternoon. Running back Sony Michel finished Sunday’s game carrying 20 times for 85-yards, 14 of which went to the left side.

Dallas’ pass rush was also kept at bay and Wynn played a big factor in that and he looked fairly comfortable out there. Not bad for a player who has been a spectator all season as he spent time getting healthy. The team seemingly took their time and didn’t rush him back, hopefully making sure that this time, they’ll have Wynn back for the long haul.

If Sunday’s game is any indication, Wynn appears to be the difference-maker they needed up front and the result certainly speaks for itself.

4) One of the things that also stood out was the fact that Stephon Gilmore was absolutely outstanding on Sunday, completely shutting down Cowboys receiver Amari Cooper.

Cooper was held without a reception for the first time since he joined the Cowboys, with Gilmore blanketing him all game long and making sure Cooper was never a factor out there.

Gilmore also finished the game with a diving interception, which came early in the second quarter as Dak Prescott was targeting Cooper and the Patriots ended up with Folk hitting a 44-yard field goal, which at the time put New England up 10-0.

By the fourth quarter it was obvious Cooper was frustrated and the game ended in fitting fashion, with the Dallas receiver failing to haul in a fourth down reception as Cooper dove for a pass from Prescott to try and extend the game. It was initially ruled a 20-yard reception but was overturned after replay showed that Cooper couldn’t quite secure it before he hit the ground.

But credit Gilmore for his performance. In a tight game like this one where there was little margin for error, the veteran defensive back made sure there were certainly no mistakes on his side of the field. 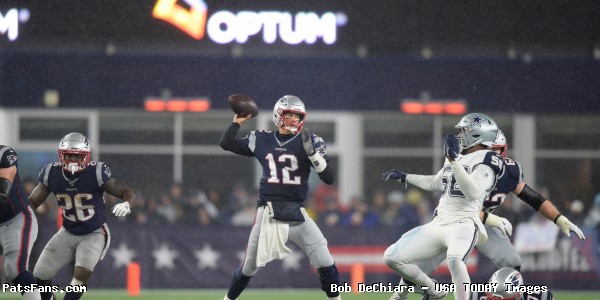 5) Sunday’s game was a solid outing for Brady, who finally had some room to work back in the pocket.

With Wynn stabilizing his side of the offensive line, Brady did a solid job even despite the rain throwing the football. Granted, there were a couple of throws that were off-target, but that was to be expected given the elements. But the biggest thing that was noticeable was the fact he was much more poised than he had been in recent weeks and that was largely because he was under significantly less duress.

Brady finished the afternoon 17-of-37 for 190 yards and a touchdown, with his best quarter coming in the final 15 minutes of Sunday’s game as he completed 7-of-13 for 55-yards, which included a terrific 23-yard pass to Julian Edelman that put New England in Dallas territory. While the drive stalled, that pass was big because it put them into position to allow Jake Bailey to pin the Cowboys in at their own 8-yard line and forced Prescott and the offense to have to drive the length of the field if they hoped to win the game.

However, he did make a dangerous play in this one on another throw to Edelman as he was sandwiched between defenders and twisted awkwardly as he went down. Fortunately, Brady escaped injury but watching it on replay was certainly scary. For a player who normally does a pretty good job with self-preservation, that was a moment that could have turned out badly and he’s fortunate to have come away unscathed.

But overall, it was probably the most comfortable we’ve seen Brady in a long time and with a climate-controlled game up next in the dome in Houston, it should be interesting to see if this is the week both he and the offense finally breaks out.

If ever there was a week to make a statement, this is certainly it. Hopefully, that’s exactly what we’ll see next Sunday night when New England faces the Texans as they look to improve to 11-1 on the season.