3 years ago at 8:51 am ET
Follow @SteveB7SFG
Posted Under: 2019 Patriots Regular season 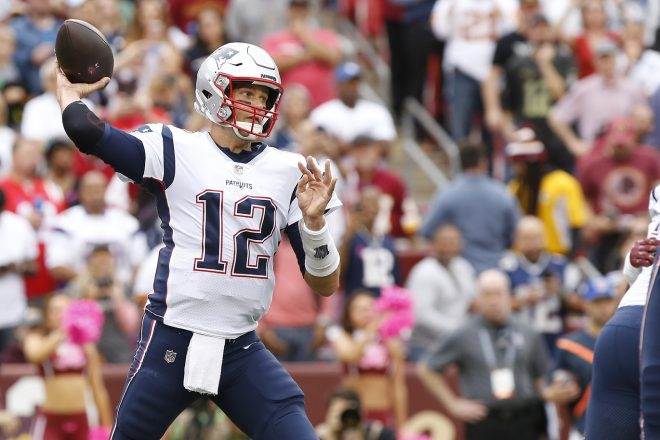 The Patriots head back out on the road and come off of their bye week to face the Philadelphia Eagles in a big game for both teams.

The Patriots are trying to stay ahead of the Baltimore Ravens for the top spot in the AFC while trying to keep some distance between themselves and the Buffalo Bills in the AFC East. Philadelphia got off to a slow start but is locked in a tight divisional race with the Dallas Cowboys in the NFC East and won their last two games to go into their own bye week at 5-4.

The Patriots (8-1) are coming off their bye week. But in their last game, they were defeated by the Ravens 37-20.

The Eagles (5-4) are coming off their bye week. In their last two games they defeated the Buffalo Bills and the Chicago Bears.

During the regular season, the two teams have met 12 times with Philadelphia holding a 7-5 edge overall. The last regular-season meeting was in Foxboro in December 2015 with the Eagles winning 35-28.

The Patriots running game has not had the production that was envisioned this summer. It is plodding along averaging just 92.9 yards per game, just 23rd in the NFL. That isn’t good enough. Sony Michel is averaging only 3.3 yards per carry. Against Baltimore, he had just four carries but that may have had more to do with the Ravens jumping out to an early 17-0 lead that forced the Patriots to abandon the running game a bit.

Philly’s run defense is playing very good thus far in 2019 allowing just 87.3 yards per game, good for 4th best in the NFL. Buoyed by the big men upfront Fletcher Cox and Teddy Jernigan inside and Derek Barnett and Brandon Graham at the edge with a group of athletic linebackers at the second level.

Expect to see more what the Patriots did in Baltimore two weeks ago and using Rex Burkhead and James White running occasionally out of the shotgun formations to keep the Eagles defense honest, but this won’t be a big Sony Michel week.

The Patriots passing game has been given a boost by the addition of Mohamad Sanu. He and Julian Edelman give Tom Brady a pair of inside receivers that can move inside or outside, depending on the matchups. With an extra two weeks in the Patriots system, Sanu should be farther along in his development. Phillip Dorsett rounds out the top three at WR while Burkhead and White out of the backfield add the extra dimension for defenses to account for. Ben Watson at tight end should see more looks in the passing game down the stretch.

The Eagles pass defense has been middle of the road allowing 239 yards per game (16th). Their strength is again up front where they’ve logged 24 sacks on the season. Graham, Cox, and Barnett can be very disruptive. Their secondary hasn’t been good, they’ve been banged up but are getting healthy and rounding into form.

Look for Brady to try to slow down the pass rush and account for less than stellar pass protection by getting the ball out quickly to Sanu and Edelman. If the Eagles pass rush begins to get home, it wouldn’t be surprising to see the offense go to an uptempo, hurry-up mode that slowed down the Ravens front seven.

Philadelphia has been susceptible to the deep ball this season, something that isn’t necessarily a strength of the Patriots offense but I’d imagine they’ll test the waters a few times to try to loosen them up. Will we see N’Keal Harry this week? And how much, if at all will he play???? Inquiring minds want to know.

Next up the Eagles offense:

The Philadelphia rushing attack has been featured in their last two games against the Bills and Bears and Philly has held the ball for 77 minutes compared to 44 for their opposition in those two contests. They feature Jordan Howard (525 yards, 6 TDs), Miles Sanders (336 yards, 1 TD) and Darren Sproles running behind one of the best offensive lines in football.

The Patriots defensive front seven took a big hit in the Baltimore game, getting gashed by the Ravens ground game. While some of that was playing the wrong schemes, they’ve had some uncharacteristic tackling issues as well. They will be looking to slow down that running attack this week and get back on track where they’ve been prior to the past two games. On the season, the defense is 11th against the run, allowing 99.1 yards per game.

Look for the Eagles to run more of their 12 personnel looks this week with two tight ends. They’ve been successfully doing that lately and Carson Wentz is always a threat to scramble. The dreaded RPOs (run-pass options) that Philly runs and ripped the Patriots in SB LII will an area to watch.

If the Philly guards get to the second level and are able to attack the Patriots linebackers there, it will be a long afternoon for the defense again. The Patriots will be looking to stuff the run at the point of attack. Look for them to be more aggressive this week and ditch some of the two-gapping style we saw in Baltimore.

The Philly passing game has been beset by injuries and inconsistency. They wanted to base the passing game on DeSean Jackson but he’s been hurt. Alshon Jeffrey and Nelson Agholor have been bedeviled by drops at inopportune times. However, they boast two outstanding tight ends in Zach Ertz and Dallas Goedert and those two will be a handful to cover, especially on third down and in the red zone.

The Patriots secondary has been outstanding this season. Stephon Gilmore has been showcasing his talents since early this summer. Jonathan Jones is having a Pro Bowl type of season and J.C. Jackson as well as Jason McCourty have been very solid.

When Philly has struggled, it has been because of protection issues for Wentz. The Patriots with 32 sacks this season have the capability to be very disruptive and force Wentz into scrambling behind the line. The key to this week will be how well they cover Ertz and Goedert. Ertz is one of the best tight ends in the league and Pat Chung, who’s been banged up will draw him…if he’s available. The Patriots secondary can handle the wide receivers, but the key here will be the tight ends.

The Patriots special teams are now on their third kicker Nick Folk who they hope won’t be forced into making a pressure kick from long distance at this stage of his career. Punter Jake Bailey has been outstanding in his rookie season, skying long punts and getting better and better and pinning opponents inside the 20. The coverage units have been excellent although the return game has been only so-so.

The Eagles have Jake Elliott who hasn’t missed a field goal this season… hmm. Cameron Johnson has also done a terrific job at pinning the opposition inside the 20. The Eagles have Sanders and Sproles returning kicks and punts respectively. But because of Elliott and his consistency, they get the nod here.

The Patriots are looking to improve to 9-1 and this should prove to be a fascinating matchup of two very good teams. The inconsistency that plagued Philly seems to have been eradicated and Doug Pederson is a very game-plan specific coach. Look for different looks and formations that the Patriots haven’t seen given that he’s had two weeks to prepare.

Spread Them Out – Look for the Patriots offense to once again go to a more spread look and hit the quick passing game with an uptempo look. Using only three wide receivers as they did in Baltimore isn’t the answer, so look for Jakobi Meyers and fellow rookie N’Keal Harry to get some play this week.

As always this is a Julian Edelman, James White type of game for Tom Brady. Those two will be targeted a lot by Brady and the Eagles defense. The “X-Factor” in this one is Mohamad Sanu. If he shows more of the development that we expect at this point, then he should be in line for a big day.

Run Defense Has to Rebound – The Eagles running game will present a huge test for the Patriots defense. This game will hinge on the play of the offensive and defensive lines this week. While that sounds cliche, it is especially true this week. The Patriots front seven has to be more aggressive in attacking the running schemes of the Eagles and try to blow plays up in the backfield.

Win Third Down – The Patriots struggled both offensively and defensively on third down in Baltimore. That will have to change this week. Offensively they have to keep the chains moving and wear down that front seven of the Eagles. On the defensive side, allowing Philly and Wentz to have those easily manageable third downs (3rd & 2, 3rd & 3 or less) is a recipe for the tight ends to kill them in the short passing game.

They have to get the Eagles in those 3rd and long situations where they can bring pressure on the QB, something they’ve been excellent at doing this season. Forcing Wentz to have to throw in those longer situations, plays to the strength of the secondary.

We’ve already said this is a fascinating matchup and this should be one of the best games to watch this week. We expect a really great, close game although not quite as high scoring as the last time these two teams met.

I think both teams will move the ball at times and struggle at others. The experience factor with Brady will play a huge role here, he’ll lead the offense to a late score and the Patriots defense returns to form with a big stop as New England returns to the win column.  Patriots 27-24

The “Knocking on Sevens’ Door” tour returns home to Foxboro next week as the Eagles will become Patriots fans as the Dallas Cowboys visit Gillette Stadium.