3 years ago at 9:42 am ET
Follow @SteveB7SFG
Posted Under: 2019 Patriots Regular season 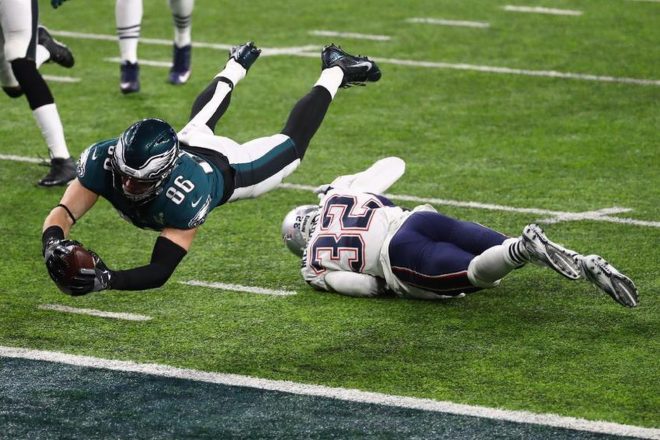 It is interesting to note that although the Patriots could use the time off to heal up some injured players and to get newcomer Mohamad Sanu as well as injured rookie N’Keal Harry better acclimated to the New England offense, the Patriots have often appeared sluggish in their return to the field after a bye. That type of start could be a bad harbinger of things to come this week.

So, let’s take a look at the 2019 version of the Eagles and see what is going on in Philly with Doug Pederson’s team before Sunday’s matchup.

The Offense is Changing Their Identity:

The Eagles, much like the Patriots have done in the past saw that some things weren’t working and rather than slam their heads against the wall, have adapted and in particular, the offense has been changing.

At the beginning of the season, Philly was basing their offense around a deep group of wide receivers beginning with DeSean Jackson, who they had brought back to be the deep threat for their offense. The only question this summer was if there would be enough passes to go around.

But Jackson has been hurt and Alshon Jeffrey and Nelson Agholor have been very inconsistent with a lot of drops at key times. Jeffrey, in particular, has looked like he’s been laboring out on the field.

So, the Eagles have been running a lot of 12 personnel lately. Running behind arguably the best offensive line in football, with three outstanding backs in Jordan Howard, Miles Sanders, and Darren Sproles, the offense has been chewing up the clock and the opposition.

Howard has run for 525 yards with 6 TDs while Sanders has 336 yards and a score while adding an additional 22 catches for 305 yards out of the backfield in the passing game.

In their 12 personnel package, they can throw to two excellent tight ends in Zach Ertz and Dallas Goedert. With the RPO game that Patriots fans will remember from the Super Bowl, this will be a huge test for the Patriots defense.

Philadelphia’s strength is their front seven and the ability to shut down the running game. Fletcher Cox, Brandon Graham, and Derek Barnett can get after the QB and disrupt things for the passing game.

Going against a Patriots offensive line that has been under-performing for the most part this season, This is another big matchup that will go a long way in deciding the game. While the Eagles secondary has had their share of injuries, they’re beginning to get healthy. But if there is a weakness in the defense, it is the pass defense.

Look for the Patriots to try to slow down the pass rush and tire out their better players by going with quick, short passes to the wide receivers which will hopefully open up some holes for the running game. But Philly’s run defense is excellent allowing just 87.3 yards per game, good for 4th in the NFL.

Expect the Unexpected With Philly:

Doug Pederson runs a very game-specific offense. Their game plan will have a set of different formations and looks that Pederson specifically installs for each opponent. He is guaranteed to throw something at the Patriots that they probably haven’t seen much of, if at all this season.

How well the Patriots can recognize and react to those formations will go a long way in determining the outcome. And with two weeks to prepare for this one, Pederson should get pretty creative.

The Eagles have been up and down this season and at just 5-4, this start was unexpected as many picked them to be one of the teams to watch in the NFC. Philly began with a close win over Washington then dropped consecutive games against the Falcons and Lions. A big win over Green Bay on the road followed by a stomping of the Jets appeared to have them on the right track.

Then came big losses at Minnesota and Dallas which left them at 3-4. But then they turned it around in Buffalo with a big win over the Bills before beating Chicago before their bye week.

Did they right the ship in their last two big wins or will their inconsistent ways return this week? This is a big game for both teams but may be an even bigger contest for the Eagles as they’re still chasing Dallas and have already dropped a game against their divisional rivals. This should be one of the games to watch this week.

With all of the talk of a “Super Bowl Rematch”, I’m not buying it. Both teams are pretty different from the last time they met. And that game is nearly two years removed since they last met. While it sounds good from a media perspective, I doubt that the teams will be looking at it as such. The game has big enough implications for each team as it is.

We’ll have our keys to the game and key matchups later this week. Stay tuned…

By: Mark Morse
Practices for the East-West Shrine games are getting started. Here are prospects that you should look for during the week leading up to the game…
14 hours ago