3 years ago at 9:44 am ET
Follow @ralvarez617
Posted Under: Patriots Photos 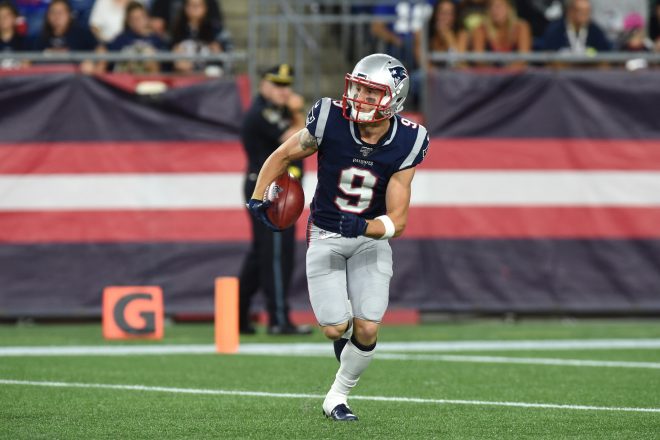 After going undrafted in the 2019 NFL Draft, Olszewski fought and worked his way onto the Patriots final roster an hour before the deadline to open the season.

Through 8 games, Olszewski has primarily been used on special teams, but due to injuries has also seen action at wide receiver.

“Gunner works really hard,” Belichick told reporters on October 19th . “He gives a lot of effort to do, again, whatever we ask him to do. Whether that’s return kicks, cover kicks, block, catch – he works really hard. Just gives his best all of the time, so you can’t ask for anything more than that. He keeps getting better, so we’ll see where it goes. But, yeah, he’s a good, hard worker.”

Olszewski had some fun with his newfound fame and success over social media this week, sharing a funny comment attached to an advertisement for his first public signing event.

“Just a heads up . Y’all c’mon out on the 12th looking forward to meeting everyone and signing some baby’s”

Somewhere Ricky Bobby would be proud.

Just a heads up . Y’all cmon out on the 12th looking forward to meeting everyone and signing some baby’s