3 years ago at 7:45 am ET
Follow @SteveB7SFG
Posted Under: Patriots News 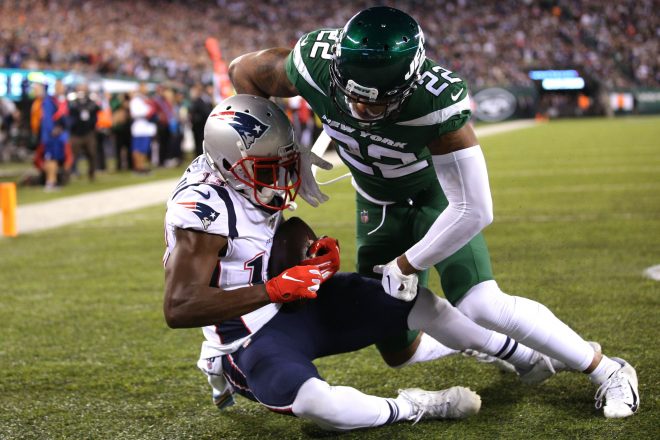 It would seem that the Josh Gordon era in Foxboro is over. Multiple national writers are stating that the Patriots, who placed Gordon on IR on Wednesday afternoon are planning on releasing the oft-troubled wide receiver as soon as he is healthy.

It was a bizarre ending of the day to be certain. Earlier in the day, the Patriots conducted a walk-through practice and Gordon was visible, joking with new WR Mohamed Sanu, then two hours later the news that he was being placed on IR, followed by reports that he was done in New England.

That he was being placed on IR was no great shock, everyone who saw that awkward tackle against the Giants and the way he went down thought that he perhaps suffered a serious, season-ending injury. But then reports stated that he wasn’t hurt badly and that he could return to action soon.

But the reports of his impending release were…surprising. At the very least, the timing was. And of course, speculation was running rampant. Did Gordon have another relapse in his battle to counter his substance abuse problems?

Things were confused even more when the Instagram post by the Patriots went out that they had placed Gordon on IR. Gordon responded to the post by stating “Interesting”. This set off every amateur psychoanalyst on social media, who all insist on poring over one-word posts and over-analyzing those to the point of craziness.

No one wanted to see Gordon fail here, most especially at life. But it seems he’s gone and now the world keeps turning.

So, What Happens Now With the Patriots WR Group?

The team couldn’t keep eight WRs if you’re counting Matthew Slater in the group. We all knew that wouldn’t happen.  So, someone had to go. The Patriots weren’t going to part with Julian Edelman or Phillip Dorsett. And they had just traded for Sanu. Jakobi Meyers is young and is showing great promise, Slater is a Special Teams’ captain. N’Keal Harry is the future for the wide receivers, and they just used a 1st round draft pick this spring on him. Gunner Olszewski returns kicks so the cut had to come from somewhere.

We’re just spitballing here, but despite Gordon’s good production in his time here (60 receptions, 1000 yards, 5 TDs) perhaps the Patriots thought that they were in a time of diminishing returns with Gordon. It was clear that he wasn’t running with the same athleticism that we’ve seen in the past. No one ever really expected to see that athletic freak who tore the league up back in 2013. And perhaps the coaches may feel that they can get the same production from Harry once he returns (eligible next week), down the stretch.

The short-term problem is, at least for now, who lines up where?

Gordon was the outside “X” receiver. Sanu isn’t an X, he’s been mostly used in the slot like Edelman or outside in the “Z” like Dorsett. But perhaps the Patriots could envision him doing that for now. It isn’t unprecedented. Both Chris Hogan and Jo-Jo LaFell were used as an X receiver.

Dorsett isn’t an X either, he’s most comfortable as the Z and an occasional snap in the slot. He and Edelman are both best utilized in the slot or the Z. This week at least we may see Jakobi Meyers or Sanu there. He’s shown he is capable of running the slants and back-shoulder throws that Brady was tossing to Gordon.

The Job Will Soon Belong to N’Keal Harry:

Whenever Harry is ready to return, he should be in the X role, hopefully for the Ravens game. He’s got the size (6’4, 225) and the athleticism to take over the Gordon role in the Patriots offense. The two have very similar body types when they both entered the league.

The Patriots were already working with Harry in training camp to catch the same slants, back-shoulder, and fades that Brady and Gordon were working with. During training camp, Brady and Harry had numerous side sessions where they worked on those very things one-on-one.

Brady is meticulous in where he wants his receivers and when. They were working on as soon as he made his break, the ball would be there. It isn’t an easy timing sequence, there were hiccups on the way and no doubt many will occur in the coming weeks.

More than anything, this is Bill Belichick and Josh McDaniels giving a vote of confidence to the rookie 1st rounder. And with Meyers learning quickly on the job, Harry has a lot of catching up to do. With nine weeks remaining in the season, the offense has the time to find itself and what works best for them.

Hopefully, they’ll get Isaiah Wynn back soon for the stretch run. And then we’ll see how well the unit can operate. As we’ve seen here, on a daily basis, the Patriots may be many things, boring is never one of them.