3 years ago at 7:41 am ET
Follow @SteveB7SFG
Posted Under: Patriots Commentary 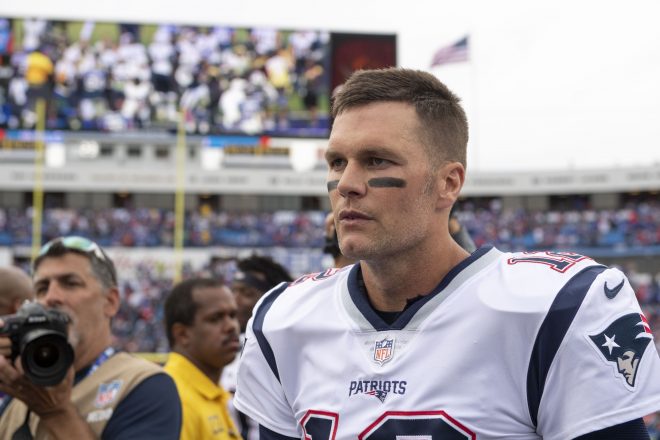 The Patriots are on the road again and are taking on the New York Jets on Monday Night Football. They’ve had some extra time off since their Thursday Night Football game but will the time off help them to prepare or will they lose a bit of their edge? They will be missing several members of the offense this week.

Here are our Patriots players to watch this week as they try to improve to 7-0 on the season against the Jets.

The Patriots, despite having the extra time off since last Thursday’s game are entering this game shorthanded and banged up on offense. That means more pressure on the QB to get it done with less. WR Josh Gordon, TEs Matt LaCosse, Ryan Izzo, and RB Rex Burkhead are out, while WRs Julian Edelman, Phillip Dorsett, and Gunner Olszewski are all questionable.

Brady will be operating with one healthy receiver (Jakobi Meyers) and two tight ends that have been on the team for a week (Eric Tomlinson and Ben Watson), although Watson spent all of the training camp here with New England.

Couple that with an offensive line that has been missing two players all season and things won’t be easy for the Patriots QB. He and Josh McDaniels are going to have to get creative this week.

The Patriots linebacker is enjoying arguably his finest season with the Patriots and is turning back the clock with the way he’s been playing. With the Jets getting Sam Darnold back last week, they got much more aggressive offensively, throwing on first down more and with Darnold’s mobility he can move in the pocket and make plays with his legs.

Collins will be one of the players who will be very important for the Patriots to ensure that Darnold doesn’t get out of the pocket. With LT Kelvin Beachum out this week, Brandon Shell will be getting his first NFL start. The Patriots will no doubt want to test Shell and Collins, as well as Kyle Van Noy, will be line up on the right side of the defense to try to bring pressure on Darnold.

Collins had a monster game against the Jets a month ago, with 3.5 tackles for loss, 2 sacks, 2 QB hits, and a pass defensed. The defense will be looking for him to have another big game this week against a much different offensive team.

We’re lumping these two together this week since they will no doubt be the two players that Brady will target the most and the Jets will put the onus on stopping. Edelman against Brian Poole is a mismatch and one that he’d win easily, but expect Poole to have some help this time around. I’d expect the Jets to use a linebacker or safety on occasion to double up Edelman and force Brady to beat them elsewhere.

James White missed the first game due to the birth of his son, and Rex Burkhead had 17 touches (11 carries, six receptions) in his absence. I’d expect that White will have a similar workload this week. In the passing game, Sony Michel may see a few touches as well as Brandon Bolden but maybe it would a nice time to let 3rd-round pick Damien Harris get his feet wet. UDFA Jakobi Meyers is the only WR not on the injury report.

The Patriots are going to have to ride Edelman and White heavily, something the Jets coaches are well aware of. The adjustments made in-game will ultimately tell the tale here.

Butler is playing more snaps than any Patriots defensive lineman thus far this season. That speaks volumes to his progression in Year 3, and his versatility in being able to adapt to different situations. It is his play, which is the reason that Michael Bennett’s snaps have decreased so rapidly, more than anything else.

With Bennett suspended this week, more will be thrust on Butler’s plate. With the ever-dangerous Le’Veon Bell in the Jets backfield, the Patriots defensive linemen have to stop Bell from penetrating and allow the linebackers to clean up. They also have to push the pocket on Sam Darnold and create pressure from the inside.

Butler has been very good at being a disruptive penetrator inside and this will be a big opportunity to shine. The Bennett news will have him thrust more into the spotlight. And with a national audience tonight, Butler has a chance to create even more playing time for himself with a big game against the Jets.

Watson will be playing in his first game with the Patriots since the 2009 playoff loss to the Ravens at Gillette Stadium. He spent all of training camp with the team and was a frequent side session participant with Tom Brady getting some 1-on-1 work. But with just a week of practice, his first since the end of camp, it isn’t known how much he’ll play.

The Patriots need some production from the tight end position, something they’ve gotten very little from Ryan Izzo and Matt LaCosse who has been hurt most of the season. Especially, this week with the situation involving the injuries to the wide receivers, they need someone to step up.

Watson, despite being 38-years old, still runs well and looks like someone much younger. If he can stretch the seams of the defense, just a little bit and give them some production in the middle of the field, it will open things up for Edelman and White.