3 years ago at 7:37 am ET
Follow @SteveB7SFG
Posted Under: Patriots Report Card 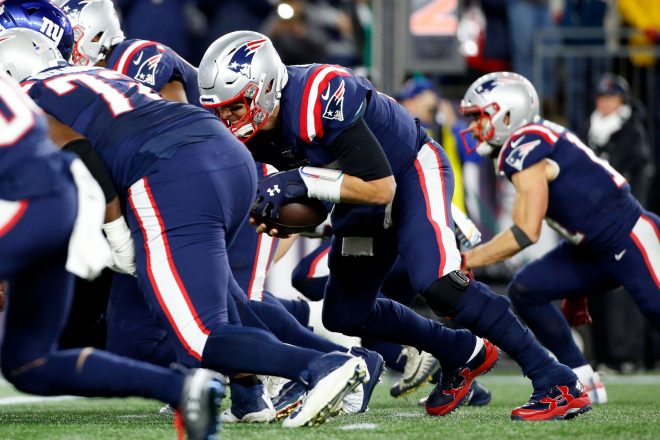 Patriots Improve to 6-0 but Got Banged Up On Thursday

Time to clean out the notebook from the Giants and begin to move on to Week 7.

The Patriots are 6-0 and remain with the impressive 49ers as the only undefeated teams in the NFL. The landscape changes so much from week to week that winning is far from guaranteed regardless of the competition.

The Patriots were favored by as much as 17 before the game and won by 21 but this game appeared to be anything other than a blowout until the final 8-9 minutes. Six different players were injured and five didn’t return, so the extra off time will prove to be a needed respite this week.

Tom Brady had another interception in the first half where it seemed like either he and Julian Edelman were way off of the same page or the wind affected a deep pass where it was easily picked off by Janoris Jenkins. He also suffered a strip-sack that was returned for a touchdown.

But in the second half, at one point he completed 15 passes in a row and finished 31-41 for 334 yards with an interception. He also scored two touchdowns on quarterback sneaks. Considering that he was playing without Josh Gordon and Phillip Dorsett and had UDFA wide receivers Jakobi Meyers and Gunner Olszewski as his #2-3 WRs, things weren’t as bad as some were painting the situation.

The favorite whipping boy for much of the media and the fan base, Sony Michel was bottled up all night until his final run at the end of the game. He finished with 86 yards on 22 carries, a 3.9-yard average. But the blocking for him just wasn’t there at all.

James White was stuffed on his two rushing attempts, while Brandon Bolden scored the game’s first touchdown and had 23 yards on three attempts. Brady scored on the other two touchdowns on the ground.

Overall, the Patriots ran for 114 yards on 34 carries [3.4-yard average] which isn’t good enough. And they lost another fullback Jakob Johnson who is going on IR.

Julian Edelman had his second 100-yard game in a row [9 catches 113 yards] and was his normal pain-in-the-backside self to the defense. With no Gordon or Dorsett, the Giants knew they had to stop him but couldn’t. He had two drops that hurt considering the circumstances.

Jakobi Meyers and Gunner Olszewski both contributed with 4 catches for 54 yards and 2 catches for 34 yards respectively. Both are normally working more with the scout team than the offense in practice, so they get high marks for their night. But although the team got by on TNF with them as the #2-3 WRs, this isn’t sustainable.

Josh Gordon had one catch before getting injured. James White had nine catches on nine targets but for only 46 yards. Michel and Bolden each chipped in with a pair of catches out of the backfield.

Matt LaCosse was hurt again and left the game in the first half. He has been largely MIA all season. Ryan Izzo gave up the edge on the strip-sack TD on Brady and has not been good on those outside zone runs where the team has been stuffed nearly every time this year [18 outside zone attempts, 21 rushing yards this season].

Izzo caught two passes for 31 yards including a 20-yarder where he was able to shake free when Brady had all day to throw. Due to LaCosse’s injury along with others, the team was forced to play in only “11 personnel” [1 RB, 1TE, 3 WRs] for the entire second half on Thursday.

The offensive line, with the exception of the aforementioned Izzo sack and Marshall Newhouse, had a very solid night of pass protection. The Giants, and rightfully so, targeted Newhouse’s side for their pass rush and were successful. Newhouse has allowed too many sacks and the coaches are going to have to give him some help, especially with the blitz-happy Jets on-deck.

The run blocking remains very much hit or miss, they run well between the tackles but those outside zone runs and sweeps aren’t getting any traction. Short yardage runs are still a sore spot.

The defensive line once again was very good. The Giants running game was predictably held in check with no Saquon Barkley with 52 yards on 16 attempts. Lawrence Guy was solid as always upfront and played more than everyone else as they rotated bodies on a short week.

Deatrich Wise had two QB hits, but the Giants OL did a very good job of limiting pressure from the DL. Michael Bennett’s playing time continues to dwindle, he played in only 11 snaps late in the game and is now the subject of trade rumors, something to keep an eye on with the October 29th trade deadline upcoming.

The Patriots linebackers didn’t dominate the way we’ve seen in the past few weeks, but they were still excellent although they lost Dont’a Hightower in this one. But Kyle Van Noy was the man once again for this unit. Van Noy had the team’s only sack, two QB hits, six hurries and scoop and recovery of a fumble that he returned for a touchdown that put the game away.

Jamie Collins snuffed out the screen pass to Jon Hilliman and put a big hit on the back jarring the ball loose on the fumble, which Van Noy returned. Hightower, before being hurt had three tackles and a QB hit.

The secondary continues to stick like glue to the opposition’s receivers. Stephon Gilmore continues his outstanding play and Daniel Jones would have been wise to avoid his side of the field. Gilmore was targeted six times and had an interception and five passes broken up. He had another pick right in his hands but couldn’t hold on. He also deflected another that was intercepted by John Simon.

Jonathan Jones battled Golden Tate in the slot all night and gave up the Patriots first touchdown receiving this year. But even on that play, he had tight coverage and got his hand on the ball. But it was a great throw by Jones and a super play by Tate who was able to corral it and haul it in.

Jones completed less than 50 percent of his throws and had a passer rating of just 35.2 on the night while the defense intercepted him three times. Nuff said.

Mike Nugent had a miss of a field goal that doinked off the upright but the replay clearly showed that holder Jake Bailey didn’t rotate the laces away, so we’ll cut him some slack there. Also, the extra points were all good this week…small steps.

Jake Bailey had to contend with the gusty wind and averaged only 40.7 yards on his punts. The Giants Riley Dixon, also with a strong leg averaged only 39.2 on the night.

But the STs struck a big blow again when Mr. Do-Everything Brandon Bolden made a tremendous play, pushing Nate Stupar into the punter Dixon, causing the punt to carom off of his head. It was scooped up by Chase Winovich who scored his first NFL touchdown.

The Patriots coaching staff made the adjustments they needed to make offensively, out of necessity on Thursday night when injuries forced Josh McDaniels to operate out of one personnel grouping for the entire second half. Brady mentioned after the game it was the first time he ever remembers the Patriots doing that in his 20 years here.

Defensively they pushed all the right buttons and limited the Giants to just the one big scoring play and nothing else. They rolled their coverages and created mixed presures that kept the Giants off-balance.

By: Steve Balestrieri
“Jimmy was practicing and then decided not to play. Jacoby played with no ligaments in his thumb, which you can’t do that as a quarterback."
14 hours ago