3 years ago at 8:34 am ET
Follow @SteveB7SFG
Posted Under: 2019 Patriots Regular season 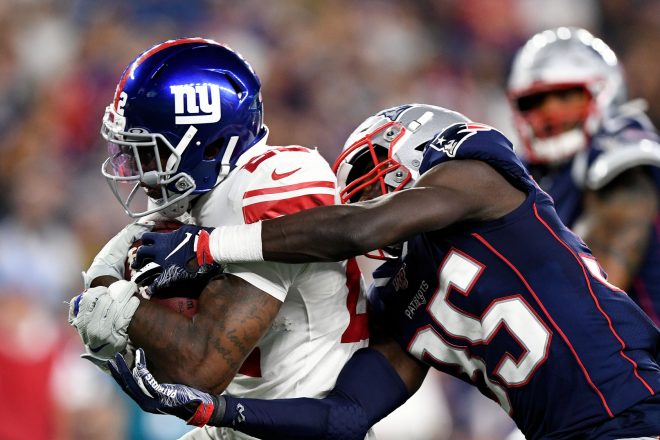 The New York Giants are hurting, injury-wise coming into the Week 6 game with the Patriots. If there isn’t enough reason to hate Thursday Night Football, besides the asinine uniforms that the teams wear, several key members of the G-Men, notably on the offensive side of the ball may not be ready to go by Thursday night.

The Giants came under a ton of flak this spring when they selected Daniel Jones from Duke with their first-round pick, sixth overall in the 2019 NFL Draft. Jones quieted some of those critics with some stellar play in the preseason. But after a slow start, Giants head coach Pat Shurmur benched two time Super Bowl winner Eli Manning and placed Jones in as the team’s starter. Jones’ first game he led a thrilling come-from-behind win over the Bucs and coupled that up with a win over Washington, before losing last week to Minnesota.

This team though right now is beset by several injuries and that is a big reason why the Patriots are 16 point favorites this week.

So, here are our first impressions of the Giants of 2019:

Belichick is Really High On Jones, Was Hoping He’d Drop in the Draft:

Bill Belichick was practically gushing about the talents of Jones when discussing the young Giants QB. During Belichick’s conference call on Monday to the media, he sounded quite impressed with him.

“We did some work on him in the spring as well; he visited here and spent some time with us,” Belichick said. “He’s a very impressive young man and I’ve gotten the chance to see him play in the last few weeks here. So he’s a smart kid, has a good football background, very athletic, runs well. He’s fast, he can get out of the pocket and he’s a hard guy to catch.”

“It’s a very diverse offense, and it looks like Jones has handled it very well,” he added, speaking about Shurmur’s offense. “He does all of the things that they do, including the RPO’s and so forth that it looks like have been included in the offense, have been added in the last couple years. So, he has a pretty complete playbook for his level of experience and he handles all of those things well.”

Jones was very impressive in a short cameo during the 4th and final preseason game here in August. But if you think Belichick is just inflating this week’s opponent, as is the norm around here, consider this.

Dianna Russini of ESPN reported that Belichick told Jones’ then Duke coach David Cutcliffe, “Jones won’t be there when we are on the clock but I sure hope he drops.”

Injuries May Have the Offense Short-Handed:

The Giants will probably be without star wide receiver Sterling Shepard who is out with a concussion. Tight End Evan Engram will also probably miss this game with a knee injury. Worse yet, Adam Schefter reported on Tuesday that besides Shepard and Engram unlikely to play, that the Giants outstanding running back, Saquon Barkley is probably not going to be able to play either.

Engram leads the Giants with 33 receptions for 373 yards and two touchdowns. The media in New York reported that there wasn’t a packed bag in front of Engram’s locker, which is indicative that he may not be making the trip to Foxboro.

Barkley suffered a high ankle sprain about two weeks ago and although he’s been at practice, albeit in a limited fashion, he hasn’t yet received medical clearance to go. Initially, it was believed Barkley would out six to eight weeks. Now it could be much shorter, given his appearance at the last three Giants’ practices.

Shurmur, however, isn’t having any of these reports. On Tuesday he stated, “You didn’t hear that from me,” Shurmur said when he was asked about the reports that described Barkley as unlikely to play on Thursday. “Some of the stuff that’s out there we didn’t put out there.”

The Giants Defense May Get Back Two Starting Linebackers:

The Giants’ injury woes on offense may be tempered somewhat by the news that two of their starting linebackers may return to action on Thursday night against the Patriots. Alec Ogletree and Tae Davis, who both missed the Giants’ last two games were full participants at practice on Tuesday.

It is hoped that both will be ready to go and that will be a big boost for a defense that has been struggling a bit. The Giants lost rookie starter Ryan Connelly to a season-ending knee injury also and with three backups in last week against the Minnesota Vikings, the Giants were gashed for 211 yards on the ground.

However, for one member of the Giants defense, strong safety Jabrill Peppers, he’s excited to be going against fellow Michigan alum Tom Brady for the first time. “This is my first time,” Peppers said. “I’m excited, I ain’t gonna lie.”

The Giants pass defense is ranked 28th in terms of yards allowed but Peppers has begun to assert himself in the defense. He had a pick-six against the Redskins two weeks ago and forced a fumble against the Vikings last week.

The old adage about the way to beat Tom Brady by moving him off his spot is very true while the silly wives’ tale of “Brady doesn’t like to get hit” is just that. Name me one QB that loves getting hit in the pocket. However, we digress here. One thing the Redskins were able to do, especially early in the game was bring pressure on Brady by only rushing three and frequently that was coming right up the middle.

The Giants’ second 1st-round draft pick this spring was Clemson defensive tackle Dexter Lawrence who they selected with the 17th overall pick. The scouting profile on Lawrence had the big [6’4, 342] man being a premier run-stuffer but a player who wouldn’t offer much as a pass rusher. But early results show that may have been a flawed report. Lawrence has two sacks, three QB hits, and several hurries.

If he can get the pressure up the A-gap that the Giants have been able to do to Brady in two SBs then they know that the chances for an upset increase. Lawrence, who grew up watching Brady on television as a kid, is eager for the opportunity.

“It would be like a dream come true,” Lawrence said in an interview earlier this week. “That’s every young defensive player’s dream, is to go sack, Tom Brady. You see people get pressure up the middle, and he gets a little uncomfortable.”

If Barkley is Out Who Is Running the Ball?

If Adam Schefter’s report is indeed true and RB Saquon Barkley misses this week’s game, his backup Wayne Gallman is also unlikely to play as he has a concussion. So the onus in the Giants running game will fall to third-stringer Jon Hillman and fullback Eli Penny who was activated off the team’s practice squad a la Jakob Johnson.

Hillman is another guy who was formerly on the practice squad after going undrafted from Rutgers, the home for many of the Patriots defensive backs. Hillman didn’t have a lot of success running against a very stout Minnesota front seven last week. He gained only 20 yards on nine carries as they had trouble moving the ball.

Penny a 6’1, 250-pound battering ram contributed in both the running and passing games and he may see a lot more reps and looks this week if the Giants offense is as short-handed as the early reports indicated.

This is another reason why Thursday Night Football sucks. But hey, the league is all about player safety.