3 years ago at 9:28 am ET
Follow @bob_george
Posted Under: Patriots News 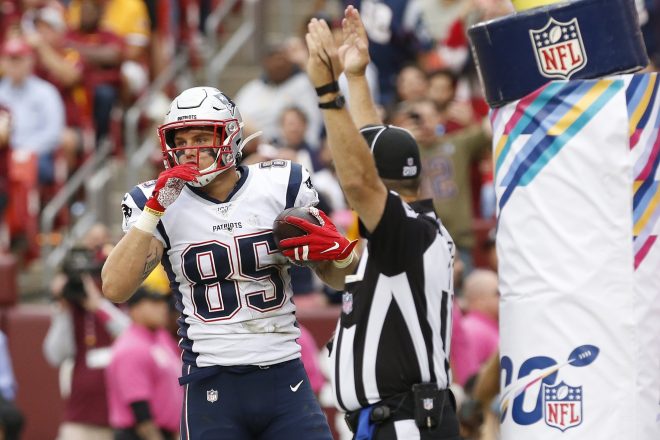 LANDOVER (formerly RALJON), Md. – Sooner or later, the schedule will get tougher and there won’t be any “tomato can” teams that won’t exploit weaknesses anymore.

Actually, if you ask Tom Brady, he’s probably glad this game is over after being sacked four times and hurried for a big chunk of the game.  But Brady still managed big numbers despite still another end zone pick, and moved up the all-time passing yardage ladder in the process.  Brady has only four days to heal up, and at his age that may not be quite so easy or straightforward.

The Patriots made only their third trip ever to this little hamlet outside of our nation’s capital, the Community Formerly Known As Raljon, Maryland.  The Washington Redskins at one point won six straight meetings against the Patriots after a shocking 24-23 win by the then woebegone Patriots at Schaefer Stadium in their first meeting in 1972.  The Patriots have now won four straight against this former three-time Super Bowl champion franchise, coming away with a 33-7 win on Sunday at FedEx Field.  Despite the game being competitive in the first half, with the Patriots trailing in a game for the first time this season, the Patriots ran roughshod over the Redskins in the second half to prevent the outmanned home team from hanging around any longer than they should have.

But the Patriots have plenty to worry about moving forward.  Injuries affect all teams to some degree, but the Patriots are lucky to still be unbeaten despite all the owies they have suffered.  The offensive line is still suffering without David Andrews and Isaiah Wynn, and both tackles (Marshall Newhouse, Marcus Cannon) allowed sacks.  There was no running game until the second half.  Brady was running around all game long and threw more balls away than he would like to see.  Phillip Dorsett was an injury scratch.  Mike Nugent, who is kicking in place of the injured Stephen Gostkowski, began his Patriot career with a missed extra point.

But the Redskins are still the Redskins.  These are not the glory days of George Allen or Joe Gibbs anymore.  This is a bad team, playing in front of crowds that resemble Los Angeles crowds, meaning more fans rooting for the visitors than the home team.  Colt McCoy is the third string quarterback, but Case Keenum is injured and rookie Dwayne Haskins isn’t ready to step into the starter role yet.  That leaves the veteran journeyman McCoy, who has yet to replicate his Texas Longhorns glory days in the NFL.

McCoy was 18 of 27 passing for only 119 yards, was sacked six times, threw an interception and finished with a passer rating of 60.6.  He was under siege all game long, far worse than Brady.  The Patriot defense, which right now is the hallmark of this team, has not yet allowed a passing touchdown this season, and McCoy wasn’t going to make a dent in that record.  Chris Thompson, a running back, led the Skins with five catches, while Terry McLaurin, like Haskins a rookie from Ohio State, led the team with 51 receiving yards.

Washington led, unbelievably, 7-0 early on on a play you wlll never see again this year from the Patriot defense.  In the first quarter, on their second offensive possession, the Skins had the ball at their own 35, second down and 8.  Steven Sims Jr., a running back, lined up in the left slot, then took a handoff on a jet sweep right and turned the corner at the end of the formation.  A block on J.C. Jackson helped Sims get a first down.  But Sims managed to run through the entire McCourty family and streaked down the right sideline for 65 yards and a touchdown.  Both Devin and Jason whiffed on tackles as Sims literally ran right through them.

That would be it for Washington offensively.  That carry was Sims’ only rush of the afternoon.  The rest of the Washington backs rushed 19 times for 80 yards, just under four yards per carry.  After McLaurin’s 51 receiving yards, Thompson and Jeremy Sprinkle had 17 receiving yards each.

While the Patriots kept blitzing and harassing McCoy the rest of the afternoon, Brady eventually managed to make plenty of hay.  Brady finished with 28 of 42 passing for 348 yards and three touchdowns.  He had a passer rating of 106.1 despite throwing a pick in the second quarter.  From the Washington 12-yard line, Brady, under pressure, tried to hit James White in the left corner of the end zone, but was picked by Montae Nicholson.  Fortunately, the officials called him down at the one-yard line despite him falling back into the end zone for what seemingly looked like a touchback.

It didn’t matter.  Brady found Julian Edelman eight times for 110 yards and a touchdown.  Ryan Izzo and Brandon Bolden also hauled in touchdown passes, a telling element as to who wasn’t playing versus who was playing.  Josh Gordon had five catches for 59 yards, but still most of the time looks like a receiver who could use another stud or two out there to take some of the defensive pressure off him.  After a slow start, Sony Michel found some holes in the second half and finished with 91 yards rushing on 16 carries and a 5.7 average, the first time he has resembled his rookie form from last year.

Brady made some history in the third quarter.  He hit Edelman in the left seam for 15 yards, and with that pass he moved past Brett Favre for third most passing yards by a quarterback in NFL history.  He was within reach of second place Peyton Manning, but Brady spent half the fourth quarter on the bench in favor of Jarrett Stidham.  Manning will have to wait until the Patriots play his brother’s team Thursday night.

It’s a short week for the Patriots, who get the Giants on Thursday night.  Instead of Eli Manning and the awful memories that go along with facing him, rookie Daniel Jones will face the Patriots for the first time in his career.  Bill Belichick gets still another rookie quarterback to take to school, and the Patriot defense is playing at an astounding level to begin the season.  The Giants were spanked at home on Sunday by the squabbling Minnesota Vikings, so the Patriots will catch the Giants at a good time despite not much time to heal up and get ready to play.

It’s amazing to come to Washington and see how far the Redskins have fallen since their halcyon years.  Both Brady and Belichick praised all the Patriot fans who made it down there to see the game.  Given how many Sox fans show up at Camden Yards in nearby Baltimore each time, it’s a safe bet that most of the fans there came down on Amtrak versus Pats fans who happen to live in the area.  The demise of the Redskins makes even more remarkable the staying power of the current Patriot dynasty, given how great that team was from 1971 to about 1992.

And if you know the backstory behind why this area used to be known as “Raljon, Maryland”, my friend, you are really up on your NFL useless information.

READ NEXT:
5 Thoughts Following the Patriots Win Over Washington
Posted Under: Patriots News