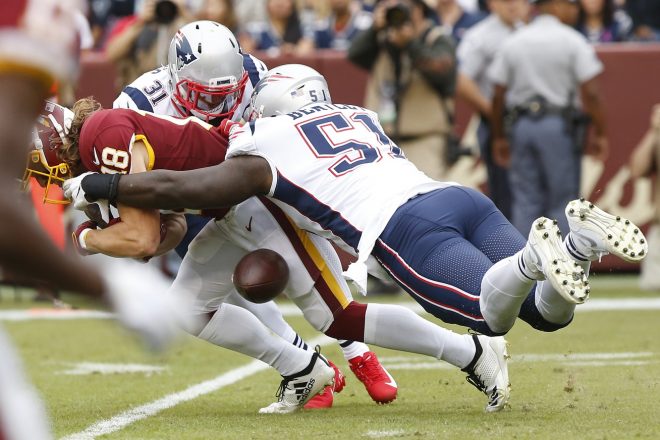 With New England improving to 5-0 on the season, here are some thoughts coming off their win over Washington:

1) Sunday’s game in Washington saw another solid performance for New England’s defense, although they’ll leave this one with a reminder that not everything was perfect.

They made one key miscue on Washington’s second possession of the game after Redskins receiver Steven Sims ran around the right end and slipped into a group of defenders and got away from the normally sure-handed Devin McCourty. McCourty wasn’t able to wrap him up and Sims pulled away, accelerating up the sideline and away from the Patriots’ defense for a 65-yard touchdown.

But after that, they settled down and played well, shutting Washington down the rest of the way. Overall, they made quarterback Colt McCoy completely miserable, sacking him 6 times. He was also picked off by veteran Jason McCourty.

The turnover gives them an NFL-best 11 interceptions on the season, well ahead of the next closest team, the Packers, who have 7. The sack total puts them at 24 on the year, still tops in the league ahead of the Panthers, who have 20.

They’re also the only NFL team to average single digits for points allowed, averaging 6.8 through five games. That’s nearly half the amount allowed by the next closest teams in that category, with the Bears (13.8), Bills (14.0) and Vikings (14.6) as the next three among the league-leaders.

But the stat that stands out the most is the fact that through five games, quarterbacks have 0 touchdowns and 11 interceptions. They’ve also held teams to an astonishing 8/63 (12%.7) on third down.

It remains one of the most impressive starts we’ve ever seen but one that continues to be downplayed among most experts who argue the level of competition has yet to prove they’re as good as they appear. That’s probably fine with this group, who remain under the radar as they’ve been a key part of helping the Patriots remain as the lone undefeated team in the AFC. 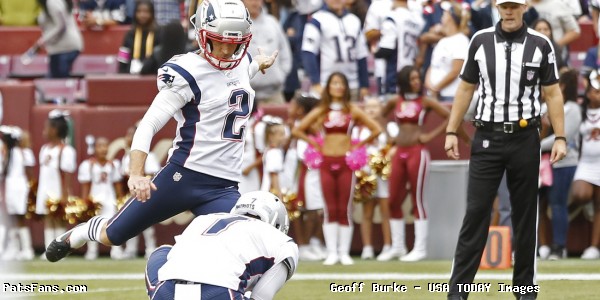 Nugent was shaky in his Patriots’ debut.

Newcomer Mike Nugent missed his first attempt with the team, hooking an extra point attempt wide right following Julian Edelman’s touchdown on New England’s second offensive possession. That clearly didn’t instill much confidence with Bill Belichick, who opted to leave the offense on the field facing 4th-and-1 from Washington’s 22-yard line early in the second quarter. Instead of a field goal attempt, the offense went with an interesting play as Brady moved over and leaned out left, pointing to his helmet as if he was calling out an audible and they made a direct snap to James White, who was dropped for a 2-yard loss.

Nugent would later hit his first field goal attempt after their next drive stalled at the Redskins’ 19-yard line, connecting on a 37-yard kick that fluttered through the uprights and put New England ahead at 9-7 early in the second quarter. He added another from 23-yards out after the Patriots marched down to Washington’s 5-yard line at the end of the first half.

But his final kick of the day was a little shaky, as Nugent doinked the extra point off the upright after Brady connected with Ryan Izzo from 10-yards out for a touchdown.

Overall, it wasn’t terrible for a player who likely had some butterflies heading into his Patriots debut. His biggest drawback is the fact that he’s not a guy who can be counted on to hit a 50+ field goal with the game on the line and according to reports, he was a little erratic from beyond 45-yards in pregame Sunday. However, one of Belichick’s areas of expertise is in special teams, so it’s not out of the realm of possibility that he’ll be someone who will get the most out of Nugent.

For now, hopefully Nugent can settle in because it won’t be long before these games start getting a little tougher and each kick will matter a little more. But so far, it appears like it might be an interesting ride. 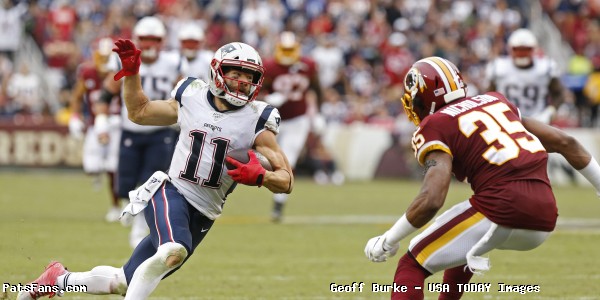 Edelman gutted out a strong performance.

3) Despite the 33-points they put up on Sunday, New England’s offense struggled in the passing game as Phillip Dorsett went down with an injury early in the contest, while Edelman gutted out Sunday in pain. Josh Gordon was hit hard every time nearly every time he touched the football, making for a long afternoon for a group that had to fight for every last yard.

Even with their personnel issues, New England found a way, scoring 33 unanswered points after Washington had taken the early 7-0 lead on Sims’ touchdown. They leaned on their ground game, with Sony Michel having his best rushing performance of the season, rushing for 91-yards on 16 carries (5.7 avg), including a touchdown. He also had a carry for 25-yards, the first 20+ yard run for the offense this season and the longest run so far for the Patriots in 2019. The previous high was 15-yards, which was also by Michel last week in Buffalo.

Edelman led all receivers with 8 receptions for 110-yards, including a 31-yard reception in the third quarter that helped set up the knockout blow for the Patriots after Michel took it in from 14-yards out on the next play.

Another pleasant surprise on Sunday was the performance of Ryan Izzo, who played a part in the Patriots getting a little bit of production out of the tight end position as Brady hit him twice for 39-yards, including a 29-yard touchdown. He and Brady appeared to have good chemistry and Izzo showed some pretty good athleticism, sneaking behind the Redskins defense and ending up all alone as Brady fired him the football for the touchdown.

On the injury front, Dorsett, who left the game early with a hamstring injury, will likely remain a player to keep an eye on as the Patriots don’t currently have much margin for error. But even at 5-0, Brady and company remain a work in progress but took a few small steps forward during Sunday’s win. 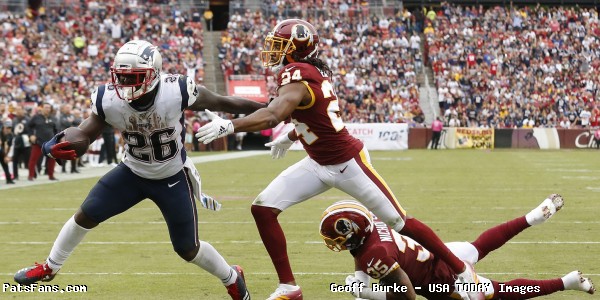 Michel was a dual threat in the passing game Sunday.

4) It was good to see Michel involved in the passing game and he looked pretty fluid when Brady targeted him on Sunday.

The quarterback targeted Michel three times Sunday, connecting on each pass for a total of 32-yards. That was key because it was obvious Washington was keying on the run with Michel on the field and it caught them off guard.

Michel ran well after getting off to a slow start. He carried just 4 times in the first half for 10-yards (2.5 avg). However, he exploded in the second half, carrying 12 times for 81-yards as the Patriots hammered Washington and ultimately put the game away.

But his success in the passing game was big and if he continues getting back to where he was running the football, that could come into play down the road for this team. If Sunday is a sign of things to come, it should be a fun dynamic to keep an eye on moving forward. 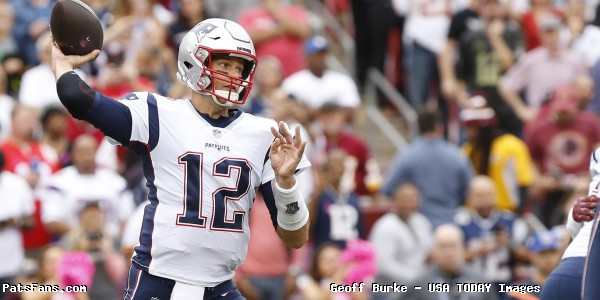 Brady was stellar in the second half Sunday.

5) Sunday’s performance by Tom Brady was a little rough but given everything he was dealing with, he fought through it and finished with a pretty good afternoon.

After starting out 12-of-16 (75%) for 154-yards and a touchdown in the first quarter, the Redskins made his life tough in the second quarter and held him to just 7-of-15 (47%) throwing the football, including his second red zone interception in as many weeks. That play stung because it came after they were in terrific field position, thanks to a forced fumble by Jonathan Jones that Jamie Collins recovered and took down to the Washington 16-yard line.

With the Patriots leading 9-7, that was a key missed opportunity that fortunately didn’t come back to haunt them. The good news is, Brady went out and had a flawless second half, completing 9-of-11 (82%) for 142-yards and two touchdowns.

Overall, he finished 28-of-42 (67%) for 348-yards along with three touchdowns and his interception before giving way to Jarett Stidham late in the contest.

When you take into account that they accomplished everything they did on Sunday with a depleted receiver group, it’s impressive to say the least. Anytime a team struggles yet still puts up 33 points, it’s a reminder that they’ll become even more dangerous down the road.

At the end of the day, the critics can say what they want but the best teams always find a way to win. For now, that’s the difference in the conference after after the Chiefs couldn’t find a way to do the same against Indianapolis Sunday night.

New England will now come home and prepare for a quick turnaround when they face the Giants Thursday night at Gillette Stadium.

How Was This Article?
Posted Under: 2019 Patriots Regular season