3 years ago at 9:07 am ET
Follow @SteveB7SFG
Posted Under: Patriots Commentary 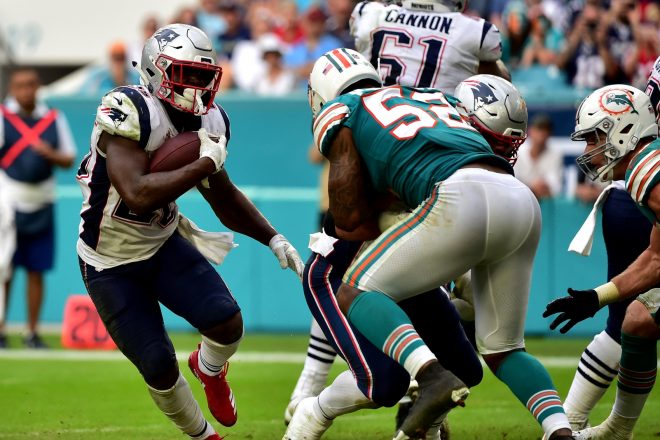 The Miami Dolphins cleaned house this past spring and brought in a new coach, GM and cut their ties with several players. The new head coach Brian Flores spent many years in New England and played a big part in their Super Bowl championship over the Rams in February.

So Miami came calling, feeling that they were heading nowhere with Adam Gase at the helm, where he was tied to QB Ryan Tannehill who, despite getting paid like a franchise QB, never produced on the field like one.

If things didn’t seem bad enough, where many NFL analysts had the Dolphins finishing among the worst teams in the NFL in 2019, right before the regular season worse news hit. The front office traded left tackle Laremy Tunsil and WR Kenny Stills to the Texans.

Their first game was a nightmare with the Raven annihilating Miami 59-10. Baltimore rolled up an incredible 643 yards of offense, 378 through the air and 265 more rushing. Lamar Jackson threw five touchdown passes completing 17-20. Miami could only muster 200 yards of offense of their own. Fans were leaving in droves long before the game ended.

So, here are our first impressions of the Dolphins of 2019:

Brian Flores and His Staff Have a Lot of Work to Do:

Flores, known affectionately as B-Flo by the players here knew that the Dolphins needed to clean house when he over the team this past winter. But perhaps maybe he didn’t realize how far they had to go. He brought several coaches from New England with him, including former Patriots WR coach Chad O’Shea, who is now the offensive coordinator. After coaching a team that was always in the running for a Super Bowl, Flores and his staff went about trying to change the culture in South Beach.

Management’s decision to jettison both Tunsil and Stills was a sign that the front office is intent on tanking the season, possibly with the hope of landing Tua Tagovailoa, the QB from Alabama despite the fact that they brought in Josh Rosen, a top 10 pick from just a year ago from the Cardinals.

Last Sunday, the Dolphins had 14 players on the opening week roster that weren’t with the team during the preseason. And it showed on the field. With his former boss Bill Belichick and the Patriots coming to town this week, the Dolphins have a lot of issues to correct, in all three phases of the game.

Following the 59-10 debacle in South Beach last week, there were reports that several players are wanting to jump ship. Mike Florio of Pro Football Talk reported that  “multiple Dolphins players contacted their agents after Sunday’s season-opening blowout loss and directed them to attempt to engineer trades elsewhere.”

Florio added that the players in question believe that some of the coaching staff, “aren’t serious about competing and winning and, by all appearances, have bought into the notion that the Dolphins will take their lumps now in the hopes of laying the foundation via high draft picks for building a successful team later.” Ouch.

Flores has denied this stating, “I can’t really speak to the accuracy of that one,” he said on Monday. “We haven’t received any information like that.” But the players know that the front office has decided to tank this season to gain a more advantageous draft position in 2020.

The Dolphins are basically holding a fire sale. And one player who several teams covet, cornerback Xavien Howard may soon be traded away as by GM Chris Grier. As for this week, Flores has announced that QB Ryan Fitzpatrick will once again get the start against the Patriots.

Baker and Eguavoen Were the Ironmen for the  Defense:

The Dolphins didn’t have many bright spots in the 59 -10 thumping they took last week from the Ravens, but Flores and the coaching staff have to be pleased with the efforts of linebackers Jerome Baker and Sam Eguavoen who showcased their skills and conditioning, especially in the South Florida heat by answering the bell all day long.

Baker led the way by playing in 84 snaps, including 12 on special teams, while Eguavoen logged 83 of his own. And despite the way the game unfolded, Baker, who was a 3rd round draft pick of the Dolphins in the 2018 NFL Draft [73rd overall], remained upbeat about his teammates.

On his Twitter account, Baker posted “I’ll go to war with this team every day!” which he tweeted with the hashtag PhinsUp and a dolphin emoji. He was asked about it after the game on Monday and he doubled down.

“It’s just a part of the game,” Baker said. “I don’t want anybody to question that we’ll all stick together. It’s just one loss. We’ve got to bounce back and ultimately stick together.”

Defensive Coordinator Patrick Graham is keeping an open mind and an open door for his players to help turn things around, being open to suggestions that will help the team find some answers.

“I think we’re all doing this job together,” Graham said. “There’s definitely a leadership role. It starts with our head coach. It trickles down to me and then to the players and then the leadership within the player group as well, but my door is always open. I’m always open to hear and listen and get communication from the players and input because we are doing this thing together. We spend so much time with one another.”

Fitzpatrick Hoping to Capture Some “Fitzmagic” This Week:

With the Dolphins in full rebuild mode, many fans expected that the team would start second-year QB Josh Rosen to see what they had in the young QB who was saddled with arguably the worst supporting cast in the NFL last year. But the team instead opted for journeyman QB Ryan Fitzpatrick.

Fitzpatrick finished the game just 14-29 for 185 yards with one TD and one INT. He gave way to Rosen who mopped up in the loss. Rosen completed one of three passes for five yards with an interception. Fitzpatrick set two records on Sunday, one of them was of the dubious quality. With his touchdown pass, he became the first QB to throw a TD pass for his eighth different team. And of course, his interception also meant that he has now thrown interceptions for eight different teams, also a record.

If the Dolphins expect another “Miami Miracle” this Sunday, they’re going to need a lot more Fitzmagic and less of the Fitzpatrick that has faced the Patriots for much of his career.

Questions Abound About the Offensive Line:

The trade of left tackle Laremy Tunsil was expected to necessitate change for the Miami offensive line in 2019, but nobody foresaw what ensued in Week 1. The coaches moved RT Jesse Davis to the left side, and then started two players, Julien Davenport at right tackle and Danny Isidora at right guard who had been on the team less than a week, the starting nod while benching Shalique Calhoun.

The only two constants from the preseason were center Daniel Kilgore and left guard Michael Dieter. The results would speak for themselves. Miami could only manage 200 yards of offense and just 21 yards on the ground.

Both new players on the right side struggled mightily as the Ravens attacked that side and consistently won the one-on-one matchups. Expect the Patriots to do the same until the new players to get up to speed with the playbook, the offense and improve the communication.

Both Davenport and Isadora struggle with pass blocking. As a member of the Texans last year, Davenport allowed 12 sacks, 65 QB hurries and committed 16 penalties. Expect the Patriots to be very aggressive on the Dolphins’ right side.