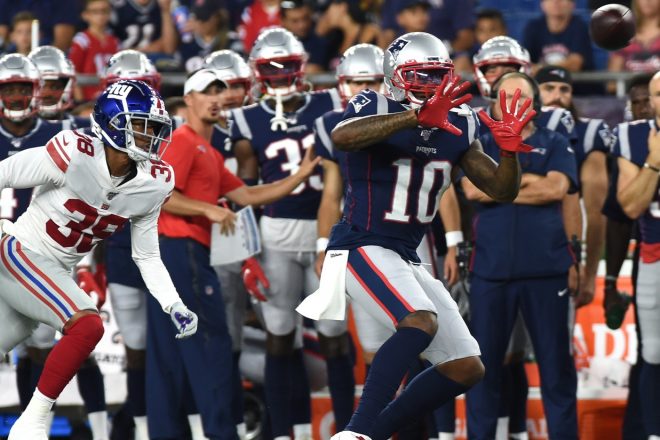 For the fifteenth year in a row, the Patriots and Giants ended their preseason with a game against each other and the Giants, courtesy of a last-second Kyle Lauletta touchdown pass [albeit one where the play clock ran out well before the snap], beat the Patriots 31-29, scoring 21 unanswered points in the second half.

With the preseason over, now comes the cut-down from the 90 man roster limit to the active 53-man roster by Saturday at 4:00 p.m. On Sunday at 1:00 p.m. the teams can fill out their 10 man practice squad. The Patriots actually have a waiver for an 11th player, Jakob Johnson due to his being an NFL International Player if he doesn’t make the 53.

Here are our quick observations from tonight’s game:

Gunner Olszewski was beaten on the final play of the game in the end zone when Lauletta launched a 14-yard touchdown to Alonzo Russell with no time left on the clock. It was a disappointing ending of what was a good night and a truly outstanding summer for the UDFA rookie from Bemidji State.

Nobody gave the Division 2 cornerback that the Patriots turned into a wide receiver much of a shot to make the team. But he’s worked hard and has been able to contribute in the kick return game and a bit offensively. He may not make the 53-man roster but he put some distance between himself and Braxton Berrios who was thought to have the inside track on the position.

On Thursday night, Olszewski returned three kicks for 77 yards, one punt for seven, and had two catches for 35 yards including a nice 29-yard reception. At the end of the game, he went back to playing defense on the Giants last possession and was at big size mismatch against Russell who beat him for the touchdown.

Olszewski has been a really nice story this summer, and there is still a shot that he’ll make the team as a returner.

Gordon, Thomas, and Edelman at WR, Who Would Have Predicted That?

Josh Gordon, Demaryius Thomas, and Julian Edelman all played in the first half, giving the Patriots a look offensively that one wouldn’t normally enjoy for the 4th preseason game. But none of them had played at all this preseason and the coaches obviously felt that they could use some live game action.

Edelman had one catch for 20-yards but landed on his injured thumb and quickly left the game, having had it checked out by the medical staff on the sideline. That tweak sent Patriots fans on social media from unbridled optimism to near panic… “Why’s he out there in a meaningless 4th preseason game, Bill!” sigh.

Thomas looked like he was moving pretty well, with no discomfort and had seven catches for 87 yards with 2 touchdowns on eight targets. It had to be a promising start for a guy who had surgery for a torn Achilles about eight months ago.

The offense and Gordon had trouble clicking as Stidham and he didn’t have their timing down. Which isn’t surprising since he was suspended since December and just began work with the team last Sunday. He was on NFI until this week. However, despite catching just two passes for 30 yards on six targets, Gordon’s night was particularly optimistic looking forward. He also drew a 35-yard pass interference penalty. Gordon showed he still has the explosiveness off the line and has the ability to stretch the field vertically which should lend itself well to the offense.

This wasn’t a surprise, we felt that the Patriots would approach the game by giving the rookie QB all the work in this final tilt. Barring catastrophic injury, this should be the last meaningful game action until the 2020 preseason.

Stidham completed 18-25 for 225 yards with two touchdowns and an interception. His pick resulted from a big hit he took as he was releasing the ball causing his pass to flutter straight up where safety Sean Chandler picked it off.

But the only way for Stidham to improve is by getting game reps so that he can work on his decision making, his speed in processing plays and getting a better overall feel of the offense. He’s made very impressive strides since the first time we watched him back in minicamp. As we said in our podcast earlier this week, the Patriots should keep three QBs on the 53-man roster.

The team started Hjalte Froholdt at guard tonight, the rookie from Denmark is considered a project for the offensive line this year. He’s been battling a shoulder issue but then went down with an injury in the first half, holding his right arm. After going into the blue medical tent, he was taken to the locker room where he didn’t return.

The team just made a couple of trades yesterday for tackle Korey Cunningham and guard Jermaine Eluemunor but Froholdt was still on our list for players making the 53-man roster. This injury may change that. If he’s hurt and going to be out for an extended period of time, the Patriots may opt to place him on IR, which may open the door for James Ferentz.

We mentioned above that the coaching staff had Gunner Olszewski in all three phases of the game, offense, defense, and special teams. But he wasn’t alone. Jakob Johnson played fullback and in the second half was also logging snaps as an outside linebacker, and even generated some pressure on the QB. But the real story was the team moving rookie Joejuan Williams to safety.

Williams is a corner but he has the size of a safety at 6’3, 212. He has the size and physicality that is slightly reminiscent of Brandon Browner. And while this may be nothing more than to see what the rookie can handle, We view Williams as a matchup piece where the coaching staff figures to use him against bigger wide receivers and/or tight ends. But with Belichick, it is always a case of “the more you can do…”

Williams played next to Malik Gant who was injured and was carted off during the game. It was curious that Obi Melifonwu who was dressed didn’t play tonight.

So, the coaches have to make their roster cuts, one player who was just signed on Sunday, LB Scooby Wright, acquitted himself quite well. He had four tackles, two sacks and two tackles for losses. Another linebacker, Calvin Munson is making a case for himself to make the roster as well.

By: Ian Logue
Thursday night's New England Patriots loss against the Bills started off with a miscue and then a little bit of hope, but everything essentially went…
22 hours ago