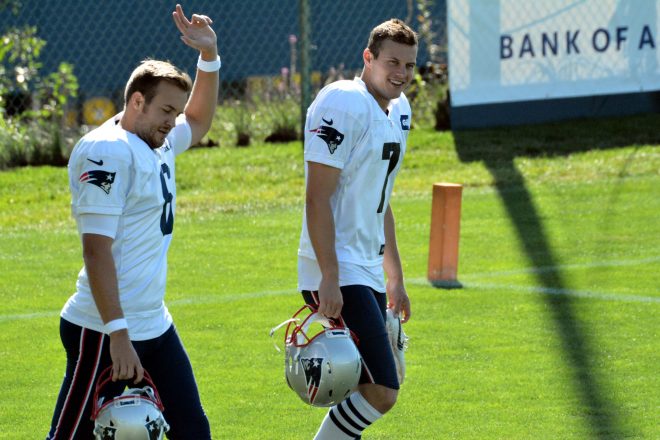 The first domino has fallen in one of the hotly contested position battles for the Patriots 53-man roster. The team is releasing veteran punter Ryan Allen and handing over the duties to rookie Jake Bailey from Stanford.

The move essentially clears the way for Bailey to get the work needed to prepare for the regular season by getting all of the punting reps as well as the holds for extra points and field goals. And by releasing Allen now, Bill Belichick does the veteran a solid move by allowing him to find a new job right away. One would not expect Allen to be unemployed for very long.

While many would consider this move surprising, especially after Allens’s performance in Super Bowl LIII, where he could have conceivably been the MVP, it was expected and we’ve written about it here since the June minicamp.

Bailey’s scouting profile listed that the rookie has a tremendous leg and can put an incredible amount of hang time on the ball. We were sold here back in June when we got to see him in the flesh for the first time.

His performance in training camp has done nothing to alter those initial perceptions, rather he’s reinforced them. While Allen has always been consistent, and most especially with his directional punting, Bailey’s punts were much longer and frequently had hang time for five seconds or more, which is well above the norm.

After the Titans safety on Saturday, Bailey’s free-kick punt from the Patriots 20-yard line traveled 67 yards and hung up for more than five seconds. This allowed Chase Winovich to tackle the ball carrier at the Tennessee 27-yard line.

His versatility had something to do with the move as well. Besides holding for kicks, Bailey can kickoff and act as an emergency field goal kicker if Stephen Gostkowski were to get injured in a game.

This move of releasing Allen frees up and additional $780,000 in salary cap space, coupled with the release of WR Dontrelle Inman leaves the Patriots with $12,614,103 in available cap room. This is according to our bud Miguel Benzan, also known as @patscap, who is the go-to guy when it comes to the Patriots and the salary cap. It also frees up a spot on the 90-man roster.

Bailey will be the first right-footed punter to play for the Patriots in the Bill Belichick era and the first on the team since Tom Tupa in 1998.