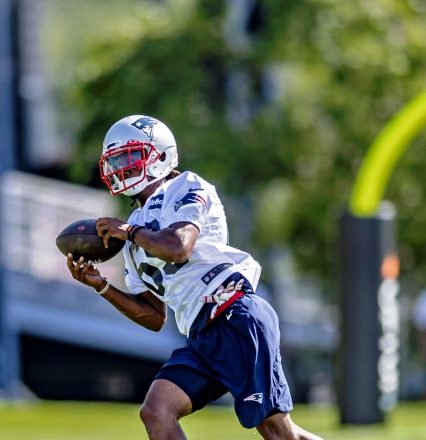 Sloppy Affair For the Offense

The Patriots conducted their sixth practice of training camp and their third in full pads on the fields behind Gillette Stadium on a very hot, humid Wednesday morning. It was perhaps the worst showing of the summer by the offense who were plagued by dropped passes. Between the heat, humidity and the Patriots defense, the offense had a rough session. They never looked in sync and had a hard time stringing any plays together.

Not Practicing – Julian Edelman and Yodny Cajuste remain on NFI, Demaryius Thomas is still on PUP along with Nate Ebner and Ken Webster.

Byron Cowart and Dontrelle Inman returned after missing three practices and two respectively. Cowart worked on conditioning while Inman jumped right back into team drills. After warmups and stretching, Rex Burkhead retreated to the lower practice fields for work with the training staff. About halfway thru practice, Lance Kendricks left with a member of the training staff, which could have been a heat issue.

The practice was conducted in full pads. Our observations included:

On the subject of Berrios, with Edelman out, he was expected to really compete and get work with the top unit on offense. After a really solid spring, things haven’t worked out. He hasn’t stood out at all. And worse yet, he isn’t getting any separation from the corners and he’s been mainly going against the second-tier guys.

Maybe in the preseason, they’ll scheme up something to get him open more. Right now, I thought he’d be rapidly becoming the Amendola option to this offense. Although there is still a long, long way to go, right now, I’d put him on the outside looking in.

The next practice session is slated for Thursday morning at 9:15 a.m.

Brady, Watson, James White, and Dont’a Hightower all spoke with the media after practice. Brady spoke about the difficulties working against this defense and getting the new players up to speed.

“They’re all new players, so we’ve got to figure out how to get them up to speed to what our expectations are, the level of competition on a daily basis,” Brady said after practice. “We have a very good defense this year. Those guys are challenging us on every day. It’s hard to complete passes on our secondary. That’s just the reality. So, it’s actually great work for our offense to see how we measure up against a very good defense.

“Days like today are frustrating for us and we’ve got to learn from the corrections and try to come out and have a better day tomorrow.”

Okay, now that we got Harry’s struggles covered, he also had the play of the day, so that his day wasn’t a total loss. One play after dropping an easy catch, Harry made the very difficult one. He attacked the seam and was facing tight coverage from Jason McCourty . He went up and made an incredible leaping catch where he came down hard on his back. He was shaken up for a few seconds but quickly returned to the huddle and continued.