4 years ago at 6:30 am ET
Follow @SteveB7SFG
Posted Under: Patriots News 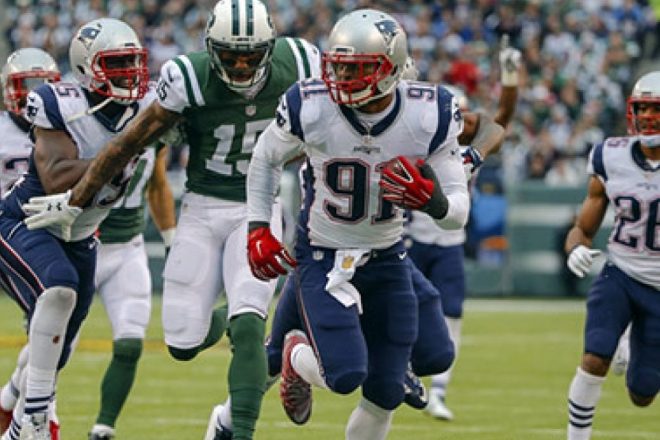 In a surprising move, the Patriots are bringing back another one of their former players. Linebacker Jamie Collins, a second-round draft pick in 2013 is reportedly signing with New England.

The news was first reported from the Boston Globe’s Jim McBride.

Collins was drafted as an uber-athletic linebacker who at times was dominant on the Patriots defense. The Patriots used him in a variety of ways in his first stint with the team. He and Dont’a Hightower provided a dangerous blitzing tandem up the A-gap, he could play the SAM or the WILL and would drop into coverage. Before being traded to the Browns, he played in 57 regular season and playoff games with the Patriots.

He got a Pro-Bowl berth and a Super Bowl as a member of the 2014 Patriots team that beat Seattle. After being traded Collins signed a 4-year, $50 million dollar extension with the Browns.

The surprising part is unlike Ben Watson who left as a free agent, Collins left under a cloud and was traded to Cleveland for a 3rd round compensatory pick, something the Patriots would have surely have gotten if he left as a free agent the next spring. On his way out of town, Collins was called a freelancer by former team exec Michael Lombardi. Lombardi also said that his work ethic was spotty and that the linebacker wouldn’t always put the effort in that the Patriots required.

In his last game as a Patriot, he barely saw the field against the Buffalo Bills, and on the first play in the game, did exactly the opposite of what was called and was burned for a 28-yard play. One can also recall the 2015 AFC Championship Game when a on-his-last-legs Owen Daniels, a tight end for the Broncos torched the Pats for a pair of touchdowns down the seam. So, while many are excited about his return, that should be tempered against the reasons why he was traded in the first place.

The Patriots will obviously have a plan to use the athletically talented Collins in this defense. And obviously, with Jerod Mayo now as the inside linebacker coach, Collins’ return is something the staff must feel strongly enough behind to make it happen.

In a perfect world, if he’s motivated and buying in then he could provide a versatile, athletic option to an already solid position. The Patriots still have Hightower, Kyle Van Noy, and Elandon Roberts as their top three options. Last year’s rookie Ja’Whaun Bentley was impressive before getting hurt in Detroit and landing on IR.

Bentley, in particular, is an intriguing case. He was impressive all summer long and in his first few games but definitely seems like he’d have a role in the defense. One would hate to see his development take a step back in Year 2.

Christian Sam is another athletic linebacker who was drafted last year but was hurt in training camp. The team also has the versatile John Simon and third-round pick Chase Winovich who can play DE or OLB.

So, Collins roster spot is hardly guaranteed, he’ll be expected to earn his way on the team this summer. With this deal, the devil is in the details. It will be interesting to see what the Patriots are paying Collins. Anything much more than the veteran minimum would be a surprise.

Collins’ time in Cleveland was marked by only so-so play and at times he looked like he suffered from indifferent play. At least one player will be happy to see him return. Hightower took to Twitter to post: ✔@zeus30hightower

The Patriots, already at the 90-man limit will be forced to make a corresponding roster move and release someone. Collins reportedly will be back in Foxboro for the team’s offseason program today.