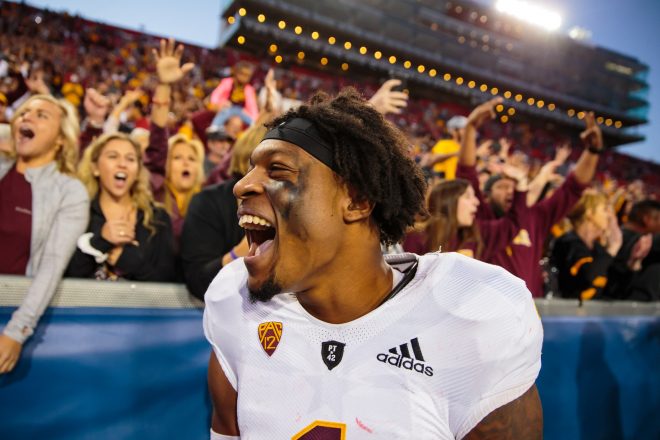 It was nearly midnight by the time the Patriots made their selection during round one of the 2019 NFL Draft and Bill Belichick, as usual, made it interesting.

With the 32nd overall pick, the Patriots selected a wide receiver, taking Arizona State standout N’Keal Harry to close out the first round Thursday night. Harry is a big target. He’s 6’2″, 228 pounds, which would give Tom Brady a big young target who with his size is a great addition. He’s an inch taller than Malcolm Mitchell, who was the last early round selection they grabbed back in round four back in 2016. Mitchell was 6’1″, 200-pounds and had a solid rookie season before injuries ultimately spoiled his seemingly promising career.

The fact Belichick made the move is telling, with the team clearly trying to inject some youth and talent into the offense after losing Rob Gronkowski to retirement this offseason. Harry’s addition now gives the Patriots some speed, with the rookie having run a 4.53 40-yard dash during the NFL combine.

But one of the things that has stood out in his scouting reports is the fact he’s a strong kid, coming away on the right side of quite a few contested passes during his collegiate career, as well as the ability to break tackles and be elusive once he has the ball in his hands. He’s also got terrific quickness, which as we know from players like Julian Edelman, is certainly an an attribute that is key in this offense.

It was the first time the Patriots had taken a receiver in the first round since 1996 when the team selected Terry Glenn back during then Patriots head coach, Bill Parcells, tenure. Parcells was reportedly against the selection after then general manager Bobby Grier and owner Robert Kraft overruled Parcells on the pick for Glenn and it sparked the end of Parcells’ tenure.

The move worked out well for the Patriots, who went on to finish 11-5 that season and earn their first Super Bowl appearance since 1986 that season, which ultimately ended with a loss to the Green Bay Packers. Parcells then departed to the New York Jets that offseason.

Needless to say, it’s an interesting pick and one that fans can hope will make an early impact this season. The last time a young player made a difference in the offense, the season ended with a Super Bowl championship. While it’s a little early to think that far ahead, it doesn’t change the fact that Harry’s selection will likely add a little more optimism looking at New England’s offense heading into the 2019 season.