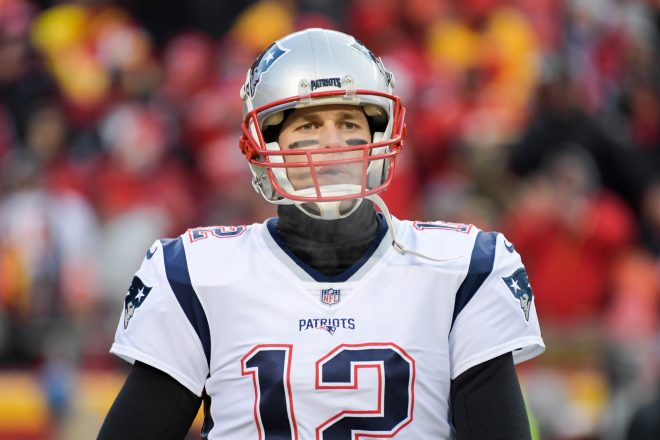 The New England Patriots and Los Angeles Rams are in Atlanta for Super Bowl LIII and contrary to popular belief outside of New England, the Patriots don’t reach the Super Bowl every year that Bill Belichick and Tom Brady are together on the field. It just seems that way.

Super Bowl LIII will be broadcast by CBS on Sunday, February 3 at 6:30 PM ET and can be seen locally on WBZ-TV Channel 4. Jim Nantz will handle play-by-play duties with Tony Romo as the color analyst. Tracy Wolfson, Evan Washburn, and Jay Feely will work from the sidelines.  The game will also be aired on the Patriots flagship radio station 98.5 The SportsHub with Bob Socci and Scott Zolak on the call, produced by Marc Cappello.

The Patriots (13-5) are in the big game for the third straight year, after blowing out the Chargers and winning an overtime thriller against the #1 seed Kansas City Chiefs.

The Rams (15-3) also won in overtime in the NFC Championship Game beating the New Orleans Saints after coming back from being two scores down early in the game.

The Patriots and Rams are meeting for the first time in the postseason since Super Bowl XXXVI, the Pats first Super Bowl win over the “Greatest Show on Turf”. The only two remaining pieces for either team remain Brady and Belichick.

The Patriots rushing offense has been outstanding down the stretch and thru the first two games of the playoffs. New England utilizes a three-headed rushing attack with Sony Michel handling the lion’s share with Rex Burkhead, and James White also adding into the mix as well.

The Rams defense uses the Wade Phillips 3-4 where they bring an extra linebacker up on the line in run support. The Rams during the regular season allowed 5.1 yards per rush but have been much better in the playoffs. In the Saints game, Aaron Donald was shooting the gaps and blowing plays up before they had a chance to develop.

The Patriots run a different system and should line up right over Donald and will look to take him on rather than trying to reach block him like New Orleans did where Donald’s quickness off the line made that a losing proposition.

Look for the Patriots to attack the perimeter in the running game and they’ll use motion with Julian Edelman and Cordarrelle Patterson to run some of those Jet Sweeps. The aggressiveness of their front, especially Donald and Ndamukong Suh is where they’ll try to exploit by running at them on the perimeter.

The Patriots interior players David Andrews, Joe Thuney and Shaq Mason will be the ones to watch against the Rams interior run stuffers. They like to move Suh around and created mismatches so this will be a key area to watch.

The Patriots passing game has ratcheted up their game down the stretch with Tom Brady and Julian Edelman both having big games in the first two playoff matchups. The key obviously is in pass protection, the Rams boast Donald, Suh, and a very good pass rush which can disrupt anyone’s passing attack.

Wade Phillips will try to take away the middle of the field and may try to double up Julian Edelman. If that happens, watch Brady put him in motion. The Rams defense struggled in the passing game against “12 personnel” groupings (2 WR, 2TE, 1RB) and look for the Patriots to utilize White or Burkhead quite a bit in the passing game.

How LA decides to cover Rob Gronkowski will be fascinating to watch. Will it be in single coverage like KC did with a safety? Or will they chip and roll more coverage on him? Gronkowski looks as healthy as he has all season and had a big game inKC. Brady will try to get the ball out quickly and negate Donald and the pass rush. How well they are able to do that will determine how successful they are at passing the ball.

The Rams played a lot of zone coverage, then switching to man coverage inside the red zone. However, since Aqib Talib’s return, they’re playing more man coverage, and that should continue this week.

Next up the Los Angeles offense:

The Rams have been one of the best teams at running the football this season averaging 139.4 yards per game (3rd in the NFL) and have two excellent running backs in Todd Gurley and C.J. Anderson. Some tendencies to watch for. When Gurley is in the game, they run nearly 70 percent of the time to the edge and when Anderson is in, that number is nearly 50 percent right up the middle.

The Rams offensive line is much like the Patriots, they are tough, very well-coached and rarely make mistakes. LA runs primarily out of “11 personnel” (3WR, 1TE, 1 RB). They like to condense the formations, (something Bill Belichick mentioned this week) and run a ton of misdirection. Like New England, they like to put a guy in motion to get three men on one side and like to run behind that strength.

Jared Goff lined up for 40 percent of his snaps under center, among the most in the league. Play action passing is a stable of their offense. I’m looking for the historian in Belichick to dust off a look that he used successfully in Super Bowl XXXIX against the Eagles, the Bears 46 Defense.

Bringing up eight men in the box and placing a linebacker outside close to the line of scrimmage is a way of limiting the running game of Gurley. They’ll place a big man over the center and use their interior men to attack the gaps. The key is setting the edge, especially when Gurley is in the game. In two playoff games, they’ve allowed just 60 yards rushing.

The Rams passing game was lighting up the league in the first half of the season. The loss of Cooper Kupp to IR has been a big blow, however, they are still very, very talented. They have a plethora of targets for Jared Goff in Robert Woods, Brandin Cooks, Gurley, Josh Reynolds, and Tyler Higbee.

The key is for the Patriots is to disguise their look until the final second. Goff doesn’t read the defense as well or as quick as Brady. Rams coach Sean McVay will have his team rush to the line and see how the Patriots line up and he’ll call out into Goff’s helmet the read until the microphones are cut off at the 15-second mark of the play clock. It will be then up to Belichick and Brian Flores to change things up and show something different. Can they confuse Goff enough or slow down his processing time enough to make a difference? That’s the key here.

Look for the Patriots to put Stephon Gilmore on Robert Woods, and possibly their speediest corner Jonathon Jones or Jason McCourty on Cooks with safety help. Rookie J.C. Jackson will see more of Reynolds.

Look for more of that “Amoeba Front” look to disguise where the pass rush is coming from to try to get pressure on Goff. They’ll rotate their coverages and safeties to give Goff a different look in an attempt to slow down his processing time to allow the pass rush to get home.

The Patriots special teams have been much better down the stretch but for once, they’re facing a team with a slightly better cast. Stephen Gostkowski and Ryan Allen remain extremely solid. Julian Edelman and Cordarrelle Patterson will look to make a difference in the return game.

The Rams have an outstanding STs unit and it begins with punter Johnny Hekker. He is always lavished praise by Belichick and not only is he an outstanding punter but the Rams have shown that they aren’t afraid of throwing it on 4th down with him. Greg Zuerlein is very good at kicking. JoJo Natson and Blake Countess handled return duties.

Keys to the Game and Prediction

This game should be another classic must-watch down to the wire matchup. What would a Patriots Super Bowl be without an edge of your seat finish? Keys to the game from a Patriots perspective are:

Start Fast and Put the Rams in Catchup Mode: The Patriots have been very good at starting fast this postseason. That must continue. The Rams offense wants to make this a track meet and that’s a game they’re much better suited to winning.

3rd Down/Red Zone Key: The Patriots have to win the 3rd down battle, on offense they must give Brady the third and manageable distances, the 3rd and 4 or less. On defense it has to be the opposite, forcing Goff into obvious passing situations where they can mix and match their coverages and bring pressure. Field goals instead of touchdowns will be a way to win or lose the game.

Win the Turnover Battle: The Patriots and Rams should both be able to move the ball this Sunday  It may come down to getting a key turnover, especially in the opponent’s end of the field. Can the Patriots generate a turnover or two, something they were unable to do a year ago?

The feeling here is experience is a great asset. Brady, Edelman, Gronkowski and James White have been here and won, before. That will be the difference in another great Super Bowl. It will go right down to the wire, but cue the duckboats, Marty, the Lombardi is coming back to New England. Patriots 31-27