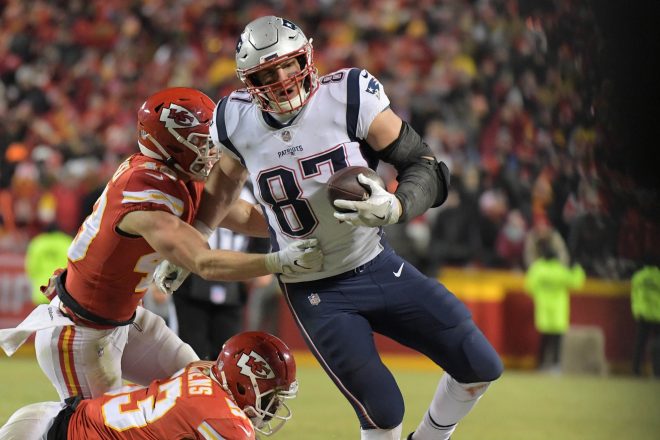 Well… That was a wild finish to that game. The fourth quarter and overtime were exactly the way we described it in our pregame matchup piece, an instant classic. A low scoring game for three quarters exploded in the final 20 minutes of the 4th quarter/OT.

The Patriots went on the road in a very tough place to play in front of a very raucous crowd and were able to pull out a very impressive win to capture their third straight AFC championship and for the Brady/Belichick legacy, this is their ninth Super Bowl appearance since 2001.

Tom Brady came out of the gate and led the Patriots on a beautifully called opening drive where the Patriots went 80 yards and ate up eight minutes of the first quarter before the Chiefs even touched the ball. They went back down again with a chance to go up 14 and Brady threw an interception on the end zone on a poor decision. Late in the half, he threw a 29-yard touchdown pass to Phillip Dorsett on a really nice pass to the corner of the end zone.

Brady ended up completing 30-46 for 348 yards with a TD and 2 interceptions, the other going off Edelman’s hands and right into the hands of the defender. But after the Chiefs found their offensive mojo and came to take the lead, the Patriots needed Brady’s magic. He gave it to them in spades.

In the last eight and a half minutes of the game, (3:32 in regulation and about 5 minutes of OT) Brady led the Patriots to three touchdown drives. He was vintage Tom Brady and checked all the blocks: Throwing into tight windows? Check. Zipping the ball downfield? Yes for certain. During those last three drives, Brady was 11-16 for 147 yards.  And a perfect 5-5 on 3rd downs. In Overtime, the Patriots converted three 3rd and 10s.

Lucky? Why are we still even having this drivel asked anymore?

The Patriots were once again led on the ground by Sony Michel, the rookie had another very productive day, grinding out 113 yards on 29 carries with two touchdowns. He was spelled late in the game by Rex Burkhead who ran 12 times for 41 yards and two touchdowns including the game winner in Overtime.

James White didn’t have a big a role as we envisioned carrying just six times for 23 yards. The Patriots rolled up 176 yards on the ground. They did exactly what was asked of them, they set the tone early in the game and then late when the Chiefs were selling out on their pass rush, they gashed them for three late scores.

Julian Edelman was once again the Patriots leading receiver with 7 catches for 96 yards and he was immense in the game-winning drive converting two huge 3rd and 10 scenarios with a 20 and 15 yard gain. But he was nearly the goat. He had a pass bounce off his hands and right into a Chiefs linebacker’s (Sorensen) for an easy interception. But he more than made up for that during crunch time. With the hits he took down the middle Edelman once again proved he is as tough as woodpecker lips.

Chris Hogan chipped in with five catches for 45 yards including a huge third-down conversion where he dove and pulled the ball into the crook of his arm for a catch that was challenged but upheld. White had four catches for 49 yards including a huge 30-yard screen pass that set up a score. Phillip Dorsett had just one catch but it was a big one, a 29-yard touchdown. Burkhead had four catches for 23 yards, Cordarrelle Patterson had two for 18, James Develin added in one for nine.

Rob Gronkowski once again dominated in the running game. He, Dwayne Allen, and Develin unleashed the backs with some crushing blocks on the linebackers and edge players. But the Chiefs decided to single cover Gronkowski mostly with a single safety (Eric Berry).

Gronkowski had a big game in the passing department as well hauling in six passes for 79 including the huge 15-yarder over Berry that set-up the final runs by Burkhead that gave them the win. It was an almost vintage-like Gronkowski performance and a well-needed one.

The offensive line had another dominant performance. The Patriots rolled up 524 yards of offense, they ran 94 offensive plays and had only one play (1) go for negative yardage. The kneel down by Tom Brady at the end of regulation.  Kansas City had a very good group of pass rushers who tallied up 52 sacks in the regular season.

Shaq Mason and Joe Thuney dominated Chris Jones last night and not only did he not get any pressure on Brady, but they also pushed him around a lot in the running game.

This was magnified by the Patriots being on the road in a very loud stadium. So the Chiefs could anticipate the snaps from Brady without having to worry about a hard count. Brady was pressured on only seven of 46 dropbacks. Outstanding.

The Patriots defensive line had a very big game. The Chiefs running game was registered as an afterthought gaining only 41 yards on 12 carries. The defensive line did a great job of mostly containing Patrick Mahomes in the pocket and bringing pressure.

Trey Flowers was terrific on the edge and Lawrence Guy and Malcom Brown were stout inside. Flowers had a sack, a tackle for a loss and two QB hits. Guy split a sack with John Simon.  Adam Butler came on in passing downs and helped push the pocket.

The Patriots much-maligned linebacking corps had another big day. Kyle Van Noy was outstanding, making plays all over the field. He had a pair of sacks, six QB pressures, and five run stops. He was a pain in the ass for the Chiefs offensive line all night.

Dont’a Hightower had another strong game playing 100 percent of the snaps and providing some pressure up the middle. John Simon saw more snaps than Elandon Roberts and had another under the radar strong game. He had a half-sack, and three QB pressures.

Wait you say. They gave up 31 points and 24 in the fourth quarter??? Well, look at the job that the secondary did on shutting down Tyreek Hill and Travis Kelce. Those two combined for just four catches for 65 yards. No one held them under 100 yards all season and the Patriots did it in Arrowhead. Hill was doubled by Jonathan Jones/Keion Crossen with outstanding help over the top by Devin McCourty. Big Mac was terrific.

Sammy Watkins had 4 catches for 114 yards but his big one, 54-yarder was one play where Mahomes had all day to throw and Watkins finally shook free from Stephon Gilmore. The Pats moved Gilmore over to Kelce in the second half and he smothered him.

Rookie J.C. Jackson was the victim of several flags and was beat by Kelce (with a push off) for a touchdown.

The only potential bad play was the almost muff by Edelman on a bouncing punt. It was a near and potentially game changer. But Edelman was very good in the punt return game returning three for 38 yards. Patterson had three kick returns for 80 yards including a nice 38 yarder. The coverage units did a much better job time around.  Ryan Allen was solid and Stephen Gostkowski hit a difficult 47-yard field goal considering the conditions.

Bill Belichick had an absolutely masterful game plan and the players executed it flawlessly in the first half. The Chiefs were shut out at home for the first time all season and they held them to just 32 yards of offense. They would adjust and finally explode with a huge fourth quarter but that allowed the Patriots to play with the lead all game.

Josh McDaniels called another strong game. He knew where the Chiefs’ weaknesses were and the Patriots offense rolled up 524 yards while having a more than double time of possession advantage (43:50 to 20:53).

Brian Flores called another very good game as the Patriots defense held Kansas City to under 300 yards of total offense. Penalties hurt but those are part of the game. We’re on to Atlanta and Super Bowl 53.