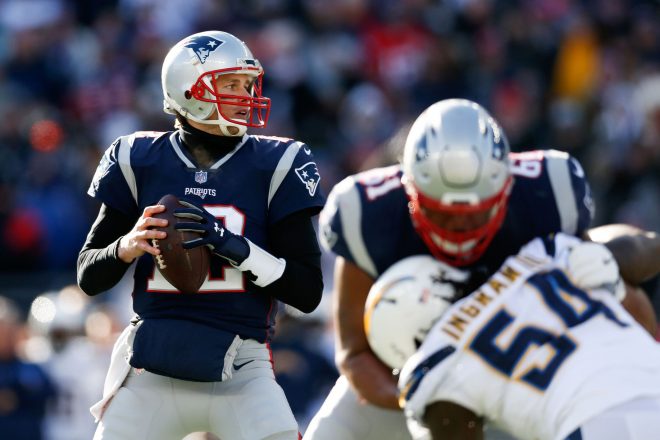 FOXBOROUGH – It’s too bad that the Patriots took their foot off the gas pedal in the second half, or else they may have dropped 60 on the Los Angeles Chargers.

Perhaps Bill Belichick is saving some points for next week’s AFC Championship Game, and they will need all they can get against the Kansas City Chiefs on the road.  But in what was the final home game for the Patriots for the 2018 season, it was a total domination of a 13-4 team who was a perfect 9-0 in road games.  The Chargers looked totally beaten at halftime, and only because the Patriots seemed to want to relax in the second half was the score as close as it was.  The Patriots earned a trip to their eighth straight AFC Championship Game with a 41-28 win on Sunday at Gillette Stadium, leaving the Chargers frustrated and humiliated in their wake.

If the Patriots play next Sunday night like they did today, they have a chance to make it to Super Bowl LIII.  Tom Brady was surgical in the first half, Sony Michel did a lot to justify his first-round selection, Julian Edelman and James White looked like Super Bowl LI all over again, and the defense was mostly dominating except for a few long plays to Keenan Allen and going into autopilot in the second half.

The Patriots scored touchdowns on the first five drives of the game, a franchise first for a postseason game.  They scored field goals on their first two drives of the second half.  Ryan Allen did not punt until the fourth quarter.  The only drive prior to that which failed was at the end of the first half, when Phillip Dorsett failed to get out of bounds to stop the clock on fourth down, and the Patriots, with no timeouts left, could not get a field goal attempt off in time (which would have been a 49-yard attempt).

The Chargers made a comeback in the second half and wound up outscoring the Patriots 21-6, but this only served to mask the outcome.  The Patriots held a 41-14 lead with 12:23 left in the fourth quarter, and school was out.  The Patriots treaded water the rest of the way, and the game was over quick but took forever to complete.  But make no mistake, this win was all Patriots, and the Chargers, seemingly unafraid to play on the road and expected to give the Patriots a tough game, were simply obliterated in every way.

Brady was in his typical Canton-esque form, hitting on 34 of 44 passes for 343 yards, one touchdown and a passer rating of 106.5.  White tied the record set by Darren Sproles with 15 pass receptions (for 97 yards), most ever in a postseason game in NFL history.  Edelman had 151 receiving yards on nine catches, with many of those yards after the catch and some of those yards gained with sheer strength and will.  Edelman now has 98 career postseason catches, second most in NFL history behind Jerry Rice.

Ironically, Rob Gronkowski had only one catch for 25 yards.  But Gronk had a hand in the running game, and had seal blocks on two of the touchdowns scored.  Michel had a marvelous game, rushing for 129 yards on 24 carries (a 5.4-yard average), and three touchdowns.  As a team, the Patriots rushed for 155 yards and a 4.6-yard average.  This attack helped Brady greatly in the passing game, as it served to neutralize the pass rush threat from Joey Bosa and Melvin Ingram.  Michel will be badly needed next week at Kansas City if the Patriots are to have a chance to pull out a win there.

Defensively, the Patriots held Rivers under 50% passing, sacked him twice, and held Allen to only two catches.  Rivers was 25 of 51 passing for 331 yards, three touchdowns, one interception, and an 81.4 passer rating.  Ty Williams and Mike Williams had an aggregate ten catches for 162 yards, as they used their height (both guys are six-foot-four) to snag some difficult catches.  Allen’s two catches were a 43-yard touchdown pass in the first quarter on blown coverage by Stephon Gilmore, and a 32-yard catch in the fourth quarter which was almost a touchdown, falling a yard short of the end zone.

Rivers was able to find some yardage in the second half, as he able to throw two of his three touchdown passes in the fourth quarter.  By then, the Patriots were just guarding against the big play, hoping no one got hurt, and pretty much just sat on the lead until the Chargers ran out of time.  Offensively, the Patriots did basically nothing, just some benign runs to help kill clock.

Twice the Chargers attempted onside kicks, and twice Nate Ebner covered them perfectly to help seal the win, which was really a non-issue at halftime.

By going soft in the second half, the Patriots maybe did themselves a favor looking ahead to next week at Kansas City.  The last thing Belichick would want to do is to show Andy Reid anything he can gameplan against with his team leading by more than four scores.  The first half, however, should give Reid plenty to pore through as he tries to come up with a game plan to get his Chiefs to their first Super Bowl since the 1969 season.

It’s now eight AFC Championships in a row for the Patriots, extending their current record.  When asked about that record in his postgame press conference, Belichick said that he basically didn’t care about that record or any previous Patriot team, just this current one.  He was also blunt about preparing for Kansas City, saying only that they are the top team in the conference, being the one seed, period.

We’re on to Kansas City.  When last the Patriots played at Arrowhead, all we heard was that we were on to Cincinnati.  This time, the Patriots want to say “We’re on to Atlanta.”  Or, since it’s the second game next Sunday, “We’re on to (the NFC champ).”

The Patriots will be underdogs against the Chiefs.  You want the Patriots to be dogs rather than faves anyday.  Let the anticipation begin.  It should be, and can be, a game for the ages.