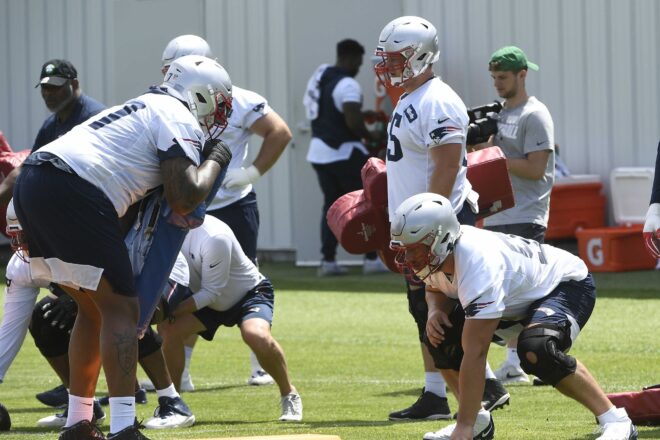 As we move into the Mini-Camp portion of the off-season, I will begin to look at each position group, starting with the Offensive Line.

The Offensive Line has been a source of controversy this off-season.  Start with the trade of Shag Mason, which Kristopher Knox of Bleacher Report labeled as “Unfair”.  Most Patriots fans felt that we gave Mason away and should have got more for a durable player that was near Pro-Bowl level performer.  Knox goes on to say, “What makes the trade worse is the hole it created”, especially since the team did not re-sign Ted Karras.  In fairness, the trade created over $5M of cap space since Mason accounted for $9M against the cap this year.

The Patriots want to establish the run again this year.  Having a strong O-line will be the key.  This unit has the potential to be a top 5 o-line in the NFL.  Let’s see how they will gel during Pre-season.  Matt Patricia is already stating that Cole Strange is running with the 1’s.  He has the athleticism to hang with them.

Michael Owenu RG – The trade of Mason freed up an opportunity for Michael Owenu to start at RG.  Owenu has played very well at RG and may in fact be a better player than Mason.

Cole Strange LG – The hole created at LG by not signing Karras should be filled by 1st round pick Cole Strange.  What is done is done as far as the draft goes and I am not going to hold where Strange was selected against him.  I am going to evaluate him on his performance and have the expectation that a high draft choice is expected to perform at a high level.

Trent Brown RT – He is a huge man at Right Tackle.  Can he stay healthy and be able to play a whole season?  He missed 8 games last season for the Patriots and 11 the year before for Las Vegas.  The 6’8” 380 lb. behemoth had calf problems and only started 9 games.  With Brown, in the lineup, the Patriots were a different team and could run on anyone.

Isaiah Wynn LT – On the opposite side is 5th year, former 1st round selection Isaiah Wynn.  He is at the end of his rookie deal and is playing for his next contract.  Injuries have limited his play and overall he has been inconsistent.  He came to camp overweight last year and was slow to recover.  With his absence from OTAs, Trent Brown was at LT.  Hope he has a good reason for missing “voluntary” OTAs.  He may end up a trade candidate.

David Andrews C – Andrews is the glue that holds the O-line together.  Despite being an undersized Center, he has performed very well.  Andrews is a former Un-Drafted Free Agent, and Captain.

Yodny Cajuste T – Of all the backups, I thought Cajuste played the best and showed he could be that swing Tackle playing both Left and Right Tackle.  I think he plays LT better.  He is an adequate backup after battling two years of injuries to start his career.  I would like to see some improvement from him to show he will be able to take over LT next year when the Patriots don’t re-sign Wynn.

Justin Herron T – With Isaiah Wynn missing OTAs, Herron was running with the 1st team at RT.  I thought he was not very good at RT last year when he filled in for Brown.  This is an opportunity for Herron, who is at least a swing back up Tackle.

Yasir Durant OG –  tried to play T but was a disaster there.  Durant is listed as a backup OG.  Durant had trouble playing Tackle in Kansas City before the trade to NE.  I don’t expect him to make the team unless there is an injury.

Jarrod “Drew” Desjarlais OG – He was a Two Time Grey Cup Champion and Canadian League All-Star.  I will be interested in seeing him play in the Pre-season, to see if the Patriots have scored another Un-Drafted Free Agent coup.  Desjarlais was the #4 overall selection in the Canadian League Draft in 2019.  He is 6’1.5” and 313 lbs.  In 2019, was selected to play in the East-West Shrine Game.  Unfortunately, he was hurt on the 1st day of practice and missed the game and half of his rookie season for the Winnipeg Blue Bombers.  He started 10 games his rookie season and every game for another two years after.  He will be 24 this season with three professional seasons under his belt.

Will Sherman OG – Last year’s sixth-round selection spent the year on the Practice Squad.  He did not impress me at all during the Pre-season and I don’t have him making the team.

James Ferentz G/C – The son of Belichick coaching tree member, Kirk Ferentz, Head Coach of Iowa Hawkeyes.  It was believed that Ferentz only made the team because his dad was a buddy of Belichick.  That is the furthest from the truth.  Ferentz proved his worth last year filling in for both Andrews and Karras and playing very well.  He will be 32 by the time he goes to Pre-season Camp.  He has signed, been released, and signed to the Practice Squad a total of 17 transactions over the last 6 years.  He played in 13 games for the Denver Broncos in 2015 and won a Super Bowl ring with them.  He also won a Super Bowl with the Patriots in 2018.   Ferentz was a street Free Agent when he initially signed with the Patriots and has been a key member of the shadow roster over the last 6 years.  I expect him to be cut again this year and available if they need him.

Chasen Hines  G/C –  Drafted in the 6th round pick # 210 – Hines versatility is what stands out.  He played both Guard and Center for LSU in their 2019 Championship season.  It is hoped that he can be the backup at LG and C.  He weighs 331lbs at a hair under 6’2”.  Weight issues have plagued him

Andrew Stueber RT –  Drafted 7th round pick #245 – Steuber is 6’ 7” 325 lbs.  He was a key member of the John Moore Award-winning Offensive Line.  The Moore award is for the Top Offensive line in the country.  A developmental player that’s on the edge of making the team, Steuber will likely be a Practice Squad player if he makes it through waivers at the final cut down.

Kody Russey C – UDFA From Houston – Started 60 games over 6 years at Louisiana Tech and Houston.  Age 24 when the season starts.  He started at Louisiana Tech as their starter for 5 years before doing a grad year at Houston.  Will compete for the backup center role or Practice Squad.  He is already 24. Or the same age as Desjarlais (without the three years of experience in a pro setting).  Described as feisty, tough, and plays with an attitude.  Finishes and doesn’t quit, a competitor with a positive attitude and leadership traits that coaches admire.

Congrats to Vince Wilfork for being selected into the Patriots Hall of Fame.  Not surprised he won the popular vote as one of the most beloved Patriots of all time.  Wilfork was effusive about how much of honor he feels his selection is.  Can’t wait for his acceptance speech and what shenanigans go on with his teammates.  I felt Wilfork would be a shoo-in for selection when he was selected as one of the finalists.

Some in the media are frustrated with the responses they received to questions they had when the assistant coaches were made available to the media.  They answered just as Bill Belichick would have answered.  Did you expect anything else?  No one would elaborate on whom will be calling the plays.  We have a better idea of what positions they will be coaching.  Patricia will be working with the O-line and Billy Yates.  Joe Judge will be the QB coach and more than likely calling the plays, Ivan Fears hasn’t officially retired and showed up as a visitor to OTAs.  RB coach will be Vinnie Sunseri, Nick Caley TEs, Troy Brown WR, and Ross Douglas assistant WR coach.  On Defense,  it is Steve Belichick OLB, Jerod Mayo ILB, Demarcus Covington DL, Brian Belichick Safeties, and Mike Pellegino coaching the CBs. Cam Achord and Joe Houston are special teams.

5 Spots open on the Roster  I and surprised we have not seen more roster moves given the fact they have 5 open roster spots.  Could it be they are waiting on some players that are recovering from injuries in order to give them physicals and sign them?  I also think there are June 1st roster cuts coming from other teams for salary cap reasons, to spread the hit over two years.  Usually, these are veteran players that immediately become Free Agents and would negotiate lower salaries.

Surprise Surprise … two UDFAs Devin Hafford CB Tarleton and D’Eriq King QB/WR Miami were cut immediately after rookie camp.  Liam Shanahan OC LSU never made it to Rookie Camp, failing his physical.  The Patriots did sign one player from rookie camp and that was Ross Reiter, Long Snapper for Colorado St.  Curious if this means that Joe Cardona has some type of military commitment this summer preventing him from participating in camp and pre-season games.

Wynn is traded , Stueber starts right tackle next to former teammate Owenu, Brown moves to left tackle Strange left guard …. Top 5 NFL Offense line we are on are way BB will shock the world Mac is the man