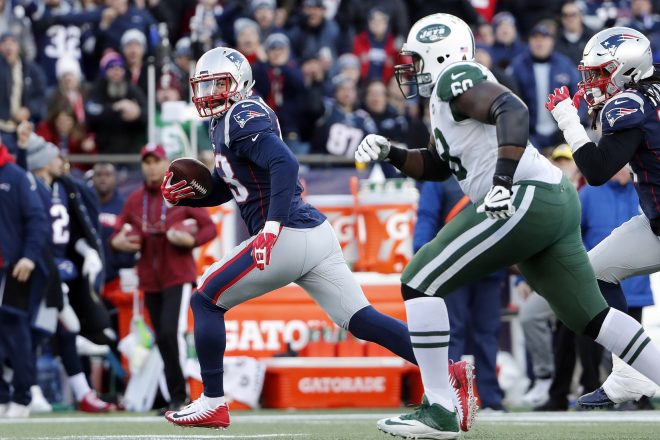 It took the entire 2018 season for the Patriots to finally put together a complete performance, but New England finished strong on Sunday with a 38-3 blowout win over the Jets at Gillette Stadium.

Here’s what we learned coming off of this one, as the Patriots clinched the #2 seed and a first-round bye heading into the postseason.

1) Defense Was Strong against the run – As much criticism as the Patriots defense has gotten against the run in recent weeks, Sunday’s performance was arguably one of the most dominant as we’ve seen all season.

They completely smothered Elijah McGuire, with the Jets running back finding himself with nowhere to go for most of the game as he was dropped for a loss or no gain on 10 of his 18 carries.

Patriots defense was terrific against the run on Sunday: pic.twitter.com/iUxuSPih3O

Six of his carries saw him fail to pick up a yard, while four more saw him dropped for a loss. Overall, he carried the football 18 times for 41 yards and they made him miserable, with McGuire finishing the contest averaging just 2.3 yards-per-carry. Sunday’s game saw him with just five of his carries going for over 3-yards.

After the game, Bill Belichick told reporters he was pleased with how they played, noting that they managed to make some plays when they needed them.

2) An Opportunistic Defensive Performance – As good as they were against the run, you also can’t say enough about how aggressive this group has been in recent weeks and Sunday saw another terrific showing as they forced some key turnovers that contributed to the win.

Their first turnover came with just under 13-minutes to play in the second quarter with New England leading 14-3 thanks to an 18-yard touchdown by Tom Brady, who connected with Rex Burkhead from 18-yards out. With the Jets looking to potentially answer, McGuire tried to start off the series by carrying up the middle on the first play of that drive, but New England had grabbed the momentum and you could see it.

On the snap, Trey Flowers hit McGuire as he came to the line of scrimmage and punched out the football, with Devin McCourty alertly picking it up and returning it 14-yards. It was a huge play, as the Patriots found themselves with terrific field position with the football at the Jets 8-yard line.

Five plays later, Brady found Phillip Dorsett for a touchdown and just like that, the Patriots were in control of the game at 21-3.

They also forced another fumble early in the 3rd quarter after Adam Butler hit and sacked Jets rookie quarterback Sam Darnold, who lost the handle on the football. Kyle Van Noy spotted the ball and swooped in, scooping it up and returning the football 46-yards the other way for a touchdown.

That play essentially sealed the game since at that point the Patriots were firmly in control at 28-3. More importantly, Belichick was pleased to see his guys playing at that level and he’s hoping it’s a sign of things to come.

“Obviously, Kyle [Van Noy]’s fumble return was a big place for us and kind of gave us a little bit of a cushion there in the second half,” said Belichick. “I thought we played hard. We had a good week and were able to finish the game on a positive note. Looking forward to continuing to play and, hopefully, we can play our best football going forward.”

While some will downplay this victory given that it came against a group that will be looking for a new head coach this offseason, it’s worth pointing out that good teams are supposed to do this to bad football teams. With the team now with a week off to regroup before they take the field in two weeks in the Divisional Round, hopefully, there are more performances like this one still ahead of them.

3) Running Game Struggled A Bit This Week – While they may have managed to put up 273-yards rushing last Sunday against the Bills, Sunday’s game against the Jets was certainly a different story as the ground game never really got going.

Coming off of his 18 carry, 116-yard performance last Sunday, Sony Michel had a hard time finding daylight consistently this week. Michel finished Sunday’s contest carrying 14 times for 50-yards, with five of those carries resulting in either no gain (3) or a loss (2).

One of the interesting wrinkles for this week resulted from the absence of Cordarelle Patterson, who was inactive for the game. The Patriots used Julian Edelman and Phillip Dorsett in his place, with Edelman and Dorsett each getting multiple carries as the offense mixed things up by moving each of the two players around and having them run the football.

Edelman’s two carries came on their final scoring drive of the afternoon, with Edelman picking up 18-yards on his first run, while later adding a 6-yard run on a 3rd-and-4 to keep the drive going. Four plays later he caught a 5-yard touchdown pass, putting the team up 38-3 as the offense added an exclamation point to what ended up being a terrific all around performance.

4) A Statement Game For Brady – Coming off his 126-yard performance against the Bills last Sunday, it was clear that Tom Brady was on a mission after a week of criticism and whispers about a potential decline in his play.

He was hot to begin the game, hitting 10-of-12 for 91-yards in the first quarter, including a perfect 6-of-6 for 56-yards on the team’s second offensive series that saw him connect with James White for a 17-yard touchdown to put them up 7-0.

He did have one rough spot, which came following Flowers’ forced fumble when the offense had the ball at the Jets 8-yard line.

On the first play of the drive, Brady rolled right and didn’t see Rob Gronkowski standing all alone in the end zone, instead being forced to throw the ball away as the defense closed in. A holding call on second down by Trent Brown then backed them up 10-yards to the Jets’ 18, setting up a frustrating sequence that looked like it was going to derail what was seemingly a prime opportunity to go up 21-3.

On the next play, Brady overthrew a wide-open Chris Hogan, firing well over his head as the ball sailed off of his fingertips and out the back of the end zone. Brady knew he had missed a big opportunity, bending over and putting both hands on his head in disbelief as Hogan jogged back to the huddle.

On the next play, a 3rd-and-18, Brady dropped back and seemingly couldn’t find anyone, rolling to his right and then fading back further as the Jets’ defense closed in before eventually heaving the ball out of bounds. However, the offense caught a break when defensive end Henry Anderson hit Brady long after he released the ball and was called for roughing the passer, giving the Patriots new life and a new set of downs.

Two plays later, Brady connected with Phillip Dorsett from 9-yards out, rolling to his right and connecting with the veteran receiver as Dorsett broke back toward the corner of the end zone and made an acrobatic catch on the football as he leaped up and caught the football and managed to get both feet down before he was knocked out of bounds.

With the game in hand he later left the contest in favor of Brian Hoyer, but not before he put together a perfect 7-of-7 fourth-quarter performance during his final two offensive possessions, with the first ending in a 38-yard field goal, while the second finished with a 5-yard touchdown pass to Julian Edelman, his fourth touchdown pass of the afternoon.

Overall, he finished 24-of-33 for 250-yards and 4 touchdowns. For Brady, while every game seems to be a barometer of where he is as a 41-year-old quarterback, he told reporters after the game that it’s just business as usual and he’s glad they were able to finish the season on a high note.

“I don’t think too much about it,” said Brady. “It just feels like I’m doing the same thing I’ve always done. So, it took a great team effort today and a lot of guys made a bunch of good plays. I just love being quarterback and love playing here and love winning.”

5) Loss of Gordon Resulted in a More Balanced Outing – With Josh Gordon out of the mix the biggest thing that stood out Sunday was the fact Brady did a much better job of spreading the football around than he had done previously.

During last week’s game against the Bills, Brady completed passes to just four different receivers, with the offense being limited in the passing game. After having a full week to regroup, Brady did a better job of moving the ball around, with seven different players catching a pass on Sunday, including four different players hauling in a touchdown pass.

Looking at the totals, what really stood out was the fact that aside from the 6-of-11 performance to Hogan (which included two overthrows and one drop), Brady was accurate with his throws and had pretty good success with whoever he targeted. He was 5-of-6 targeting Edelman (1TD), 5-of-5 to Dorsett (1TD), 4-of-5 to James White (1TD), 2-of-2 to Gronkowski, 1-of-2 to Burkhead (1TD) and 1-of-1 to James Develin.

That’s the type of performance that if they can continue with that amount of continuity, it will give them enough to make them dangerous in the postseason. After winning their final two games, Brady was happy with the way they finished the season and he’s looking forward to seeing how far they can go when they take the field again in two weeks to start the postseason.

“It just ended up being a great way to finish the year – won two games at home against our division opponents after two pretty tough losses, but showed some resiliency and we’re going to need it going forward,” said Brady. “We’ve got certainly a lot of things to learn about ourselves, a lot of things we can improve on and see if we can win a game here in two weeks.”

READ NEXT:
It’s ‘All Systems Go’ For the Patriots With The Postseason Up Next
Posted Under: 2018 Patriots Regular Season