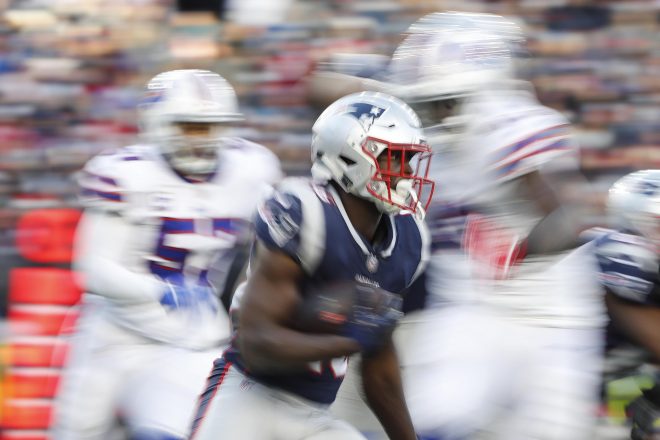 The New England Patriots refound their running game and leaned hard on it, running for 273 yards against the Buffalo Bills on Sunday afternoon en route to a 24-12 win at Gillette Stadium. The win not only gave the Patriots the AFC Division Crown for the 10th year in a row but for the time being, put the Patriots back in command of their own destiny for a bye during Wildcard Weekend.

The Houston Texans lost on a last-second field goal in Philadelphia which put the Pats back up to the #2 spot. And coupled with the losses by the Chargers and Chiefs, the Patriots could actually still get the #1 seed, however, both teams would have to lose again and have the Patriots beat the Jets. That last second loss in Miami now looms large in the grand scheme of things.

The Pats flipped the script against the Bills from the last two weeks and controlled the line of scrimmage in the running game both offensively and defensively. Both were a welcome sight. Especially with the passing offense mired in neutral all game. Here are some of our observations from Sunday’s game:

Buffalo ran for just 72 yards total but their running backs averaged just 3.3 yards per rush while Josh Allen, who’s been scrambling wild lately was held to just 30 yards this week. LeSean McCoy was held to just 9 yards or 6 carries. While he’s been slowed by a bad hamstring, the Bills will have a tough decision to make on him in the spring.

As much as we’ve criticized the front seven’s play the past few weeks, they deserve a lot of credit here. They played the run tough all day and allowed only three rushing first downs all day and held the Bills to a 2-12 and 0-1 totals on third and fourth downs respectively.

Running Game Set the Tone For Keeping the Bills On Their Heels:

Sony Michel led the way with 116 yards on 18 carries as the Pats rolled up 273 yards on the ground. Much of the credit goes to the offensive line who won their matchup with the Bills interior DL and were consistently getting a good push. Michel, who always gets his results pooh-poohed by many of the media members in Boston when he has a good game, was very sharp in this one. Strange, when Ezekiel Elliott or Todd Gurley have big games, do the Dallas or LA media caveat their stories with “yeah but the OL was opening big holes”? Not very likely. Give Michel his due, he’s had a terrific rookie season.

Cordarrelle Patterson was gashing the Bills on Jet sweeps before injuring his knee as they did a terrible job of staying at home and setting the edge. Patterson gained 66 yards on just four carries, although on one play it seemed Lorenzo Alexander was in perfect position but Patterson’s speed just beat him to the edge.

But the Patriots ground game resulted in the Pats controlling the tempo and the clock. At one point they ran seven straight times. On another drive, they ran 10 straight as they held the ball for more than 35 minutes.

The Patriots allowed the Bills to hang around for far too long in this game because of mental mistakes and turnovers and the majority were made by veterans, not rookie UDFAs. Julian Edelman had a drop on the Patriots first series and then had two penalties, one for blocking on STs after calling for a fair catch, the second time he’s done that in recent weeks. The other was a holding call that erased a nice Sony Michel run (how many times have we heard that this year?).

But Edelman atoned for that with a great heads’ up play where he caught a pass from Brady on a key 4th down call. Facing a 4th and 4 at the Bills 32-yard line, Brady zipped a nice pass to Edelman who easily had the first down. But as two Bills defenders brought him to the turf, he landed on them, never touching the ground and had the presence of mind to keep going…for a 32-yard touchdown pass.

Rex Burkhead fumbled on one run after the catch in the first half. The ball was punched out as he was going to the ground where Micah Hyde recovered and ran it back to the Patriots 40-yard line. But then later in the half, Burkhead cut outside when Brady expected him to cut across the middle and the result was Lorenzo Alexander picking the pass off at the Bills 21.

And on the first play of the second half, Brady targeted Rob Gronkowski who let the ball zip right thru his hands and into the lap of Jordan Poyer

Brady only targeted two wide receivers Edelman and Patterson, and only went to Patterson twice. Both Chris Hogan and Phillip Dorsett were not targeted in the passing game at all. Gronkowski was targeted twice with no catches and a pick.

The Bills front seven deserves a lot of credit here, they were getting plenty of pressure on Brady and were forcing bad throws all game long. With Josh Gordon gone, changes will have to be made, but this doesn’t fill one with confidence heading into January. WIth the running game gashing Buffalo, play action should have been wide open but it wasn’t for the vast majority of the game.

Another Blocked Punt for the STs:

For much of the year, the Patriots special teams had uncharacteristically struggled. But they brought back Ramon Humber and signed former Raven Albert McClellan and the results have been very favorable. McClellan blocked a pair of punts in Miami two weeks ago and on Sunday, STs ace Matthew Slater turned the trick on Buffalo.

With about six minutes to go, Slater came in thru the inside and blocked the punt which took a Buffalo roll and actually got 10 yards where the Patriots took over on the Bills 33.

Edelman had a big punt return of 25 yards that set the Pats up in Buffalo territory for a drive that stalled at the Bills five, but they kicked a field goal that effectively sealed the game at that point.

Defense Gets Two Interceptions of Allen:

The Bills passing offense came in ranked among the worst in the league. And on Sunday they showed why. They dropped numerous passes although, in fairness to Robert Foster, a deep ball was right where he lost it in the sun. While several of Josh Allen’s throws were well off target.

However, the Patriots secondary made a couple of nice interceptions. Rookie J.C. Jackson made a nice play on a deep pass from Allen where he definitely shouldn’t have thrown that pass. But Jackson cut in front of the receiver and high-pointed the ball.

Later Jason McCourty also made nice play on another pick. Newcomer Ufomba Kamalu played about a dozen snaps on defense and had a nice tackle for a loss on his first snap as a Patriot.

The Patriots finish out the regular season by hosting the Jets who lost in O.T. to the Packers. Stay tuned…and Merry Christmas

Follow me on Twitter @SteveB7SFG or email me at [email protected]Listen to our Patriots 4th and 2 podcasts on blog talk radio as Russ Goldman, Derek Havens and myself from PatsFans.com discuss the latest Patriots news.