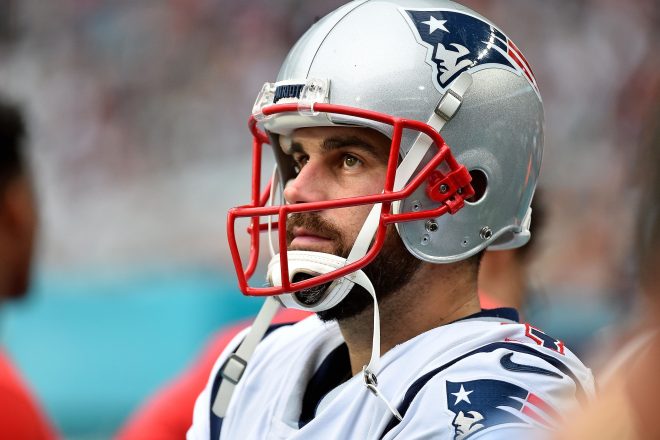 It’s not often you see a game where a Bill Belichick-coached team beats themselves, but Sunday’s showing down in Miami is a game that will have people second-guessing this one all week.

Here are some thoughts as the shock continues to set in.

1) Gostkowski deserves some criticism, but he’s not the reason they lost – One of the obvious things people will be discussing this week were the two misses by Patriots kicker Stephen Gostkowski, who has had a couple of surprising misses in the last two weeks.

After the Patriots opened with a 12 play, 75-yard drive that ended with a terrific run by James Develin from 2-yards out for a touchdown, Gostkowski hit the right upright on the extra point, giving New England a 6-0 lead to start the game.  That miss loomed large for much of the contest, as the Dolphins kept going up by one point for much of the game as the two teams spent the rest of the afternoon exchanging leads after New England’s defense couldn’t quite consistently stop them.

But the most surprising miss came early in the third quarter after New England’s defense forced a punt on Miami’s first possession of the , with the Patriots putting together a terrific drive that started from their own 22-yard line and took them down to the Dolphins’ 24-yard line.  Gostkowski came out for the 42-yard field goal attempt and pushed the ball wide right, squandering an opportunity to take a 9-point lead at 30-21.  Instead, Miami took the ball the other way after driving 68-yards on 4 plays, the last of which was a 23-yard reception from Brice Butler that went for a touchdown.  The score put the Dolphins up 28-27 with 3:58 left to go in the third quarter.

That was Gostkowski’s second miss from 40-49 yards of the year after he missed a 48yd field goal last week against the Vikings, which snapped a streak of having made 35 straight inside of 50-yards.

While both misses were tough to take, he made two key kicks in the fourth quarter that put the Patriots up 33-28 with just 0:16 left to go in the game.  Many will likely spend this week complaining about the ones he didn’t make, but what happened in those final seconds was far more inexcusable than the veteran’s misses.  Which brings us to the play in question.

2) The Patriots completely blew  on that final sequence – Looking back at the final play of the game for the Dolphins, it’s still a little staggering to look at how close they were to a play before it all unraveled and ended in a shocking loss.

After Ryan Tannehill completed the pass to Kenny Stills, Jonathan Jones was right there to make the tackle following the completion but missed after he had his arms around Stills but couldn’t wrap up.  He dove again but slid past Stills, who then turned and lateraled to DeVante Parker.

Parker then lateraled to Kenyan Drake, who started running up the sideline and Kyle Van Noy accelerated and seemed to have an opportunity to take Drake down after being right behind him, but dove and couldn’t quite wrap him up.  J.C. Jackson tried to run in and get him, but he got blocked by Parker, who got in his way as Drake slipped past.

The last shot they had was Patrick Chung, who was right there with the one chance they potentially had to bring him down.  But Danny Amendola came up and created the illusion that he might be an option for Drake to lateral to.

Instead, Drake ran behind Amendola, who shoved Chung back and out of the play and then Drake took off for the races, which was when it was suddenly clear the Dolphins had a shot to pull this off.

That left Rob Gronkowski as the only player back there to try and stop him, but he came too far up and then lost contain on the outside when he took a bad angle and stumbled as Drake beat him to the end zone.

It was a frustrating sequence that until the page is turned, will leave players and coaches frustrated knowing how close they were to winning this football game.  While it’s easy to blame it on a couple of missed kicks, what happened in those final seconds was completely embarrassing and will likely haunt these guys for the next couple of days until they start preparing for the Steelers.

3) A rare mental error by Brady cost them – It’s not often you see the greatest quarterback in the history of the game make a serious mental error in what was a potential Division-clinching game, but that’s exactly what happened with Tom Brady on Sunday in the closing minutes of the first half.

The veteran quarterback squandered terrific field position after a second blocked punt in the closing seconds of the half, with the Patriots’ special teams pulling off their second punt block of the contest that gave the offense the ball at the Dolphins’ 15-yard line with 0:30 left to play.

But after hitting Gronkowski for a 13-yard pass that got the Patriots down to the Dolphins’ 2-yard line, New England used their final timeout with 0:21 left to go in the half.  Brady then threw two incompletions, including one as he bailed out on a play where he had a shot at finding Chris Hogan, who was open in the back of the end zone.  He then took an ill-advised sack on 3rd down, not realizing that they were out of timeouts.

He took responsibility for it after the game, but that was a huge missed opportunity, as points were at a premium for most of the game and squandering a chance to score after their special teams unit had them so well set up is frustrating.  Fortunately, situations like these are rare, but still certainly disappointing nonetheless.

4) Offensively, they played well but played far too conservatively down the stretch – Had the Patriots won the football game, they could have hung their hat on the fact that while it wasn’t perfect, they did enough on that side of the football to win the game.

They finished the game without turning the ball over, with Brady throwing for nearly 400-yards along with three touchdowns.  They also ran the ball relatively well, doing enough to keep Miami off balance as they continued keeping the pressure on the Dolphins to match what they were doing offensively.

But the thing that really stood out was the fact that the second half had a different feel than the first two quarters, with the Patriots scoring just two field goals in the second half, including zero points in the third quarter.   The game plan seemed more conservative, which didn’t make a lot of sense given that they were playing relatively well up to that point.

After putting up 21 in the second quarter and building a 27-21 lead, they were far too careful, especially on the final drive where after getting down to the Miami 6-yard line, they ran the ball on two consecutive plays and settled for a field goal instead of a potential touchdown.  Had they gone for a touchdown, it would have been the knockout blow.

When you’re trying to win an important game, you typically want the ball in the hands of your best player.  Why Brady wasn’t given an opportunity on at least one of those plays is surprising, but it’s certainly easy to second-guess when you see something like what happened ruin what could have been a solid Division win on the road.

5) Dolphins did enough to make the ending possible – The worst part of this game was the fact that at no point did the Dolphins really do anything to take themselves out of the game.  Save for the two special teams blunders, they got more than adequate play out of their skill players.

Ryan Tannehill quietly had a great game, missing just 5 passes all afternoon after completing 14-of-19 for 265-yards and 3 touchdowns.  He suffered a scare during the game after getting his ankle stepped on, which briefly saw him sidelined.  But he later returned and shook it off, and did just enough to win the game.

There were no ill-timed turnovers, he didn’t give the ball away, didn’t really make any significant mental errors and it ended up being the reason why Miami was still in the game in the closing minutes.

He was extremely sharp with Stills being the player who he had the most success with.  He completed 8-of-9 for 135 yards and a touchdown, but it was the final completion at the end of the game people will be talking about as Stills was the one who got the whole play started

It’s a frustrating defeat and it certainly changes the playoff landscape after the Patriots went from being in contention for the top seed to now having to hope a few things go their way for them to have a chance at a bye.  At the end of the day, they’ll likely look back on this game as a massive missed opportunity, which now puts some additional pressure on them heading into next Sunday’s game when they go on the road again for another key match-up down in Pittsburgh.

READ NEXT:
After a Fluke Finish, Patriots Need to Move on
Posted Under: 2018 Patriots Regular Season