Quick Programming Note: After a brief break working on some projects, we’ll be picking up with daily entries from now through the beginning of training camp.

Study Finds Brady ‘Dodging’ Questions Helped Him…Really – This is the most boring time of the year as we head into the dead zone between now and the beginning of training camp, and the types of stories out there more or less reflect that.

A recent study that appeared in the current issue of the International Journal of Sport Communication looked at the reactions of people and the amount of ‘goodwill’ they felt when Brady answered questions surrounding the DeflateGate nonsense during the team’s championship run nearly two years ago.

This study apparently really happened…seriously. I’m almost intrigued enough to want to meet these people who now have hours and minutes of their life that are now gone forever.

In the study, they looked at Brady’s January 22nd, 2015 press conference where Brady responded to the charges.  David Clementson, author of the study and doctoral student in communication at The Ohio State University, worked with a professional videographer and created two shortened versions of the news conference.  The first version reportedly included a selection of unaltered questions and answers in which Brady began statements with something like, “I don’t know” followed by further explanation.   From there they put together a second video, which contained the same material but they removed the “I don’t know” style of answers and included just the responses from that point forward.

According to the study, the participants (105 college students apparently took part in this) then watched one of the two versions.  The people who saw the edited version without the “I don’t know” type of responses felt he dodged the questions, while the people who saw the complete answers were more satisfied with his responses.

Clementson said that there’s logic behind the reasoning, saying it makes “intuitive” sense.

“In the real world, we generally believe people when they say ‘I don’t know’ to a question we ask them. We don’t hold that against people. Why would it be different for sports stars and politicians?” he said.

“People felt better about Brady when he admitted he didn’t know before he offered further comments.”

No word if the scientific study included the NFL saying “I don’t know” about the Ideal Gas Law.  Although, as we’ve learned, science and logic doesn’t seem to apply in anything that happens at the league office.

Brady Congratulations Murray – After winning Wimbledon, Andy Murray got a little support from his fellow Under Armour athlete in Brady, who took to Facebook to congratulate him for his achievement.

After the win, the Patriots QB put together a fun photoshop photo as he congratulated Murray for his impressive accomplishment.

Well-played by Brady as usual. 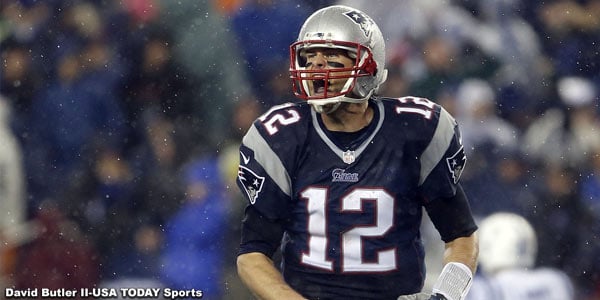 Celtics star Isaiah Thomas recently met Brady while the two were on hand trying to recruit Kevin Durant at a meeting at The Hamptons over Fourth of July Weekend and Thomas was impressed with the Patriots quarterback.  Thomas called Brady “down to earth” and used the hashtag #GREATNESS to describe him in a photo of the two on Instagram.

““I’ve always been a fan of (Brady),” Thomas said recently via CSNNE.com. “But getting to meet him, I’m even more of a fan. “I’m not usually starstruck. But that was one of those cases … I didn’t know what to ask him. He’s so down to earth.”

The two reportedly exchanged numbers and Thomas said he plans on keeping in touch with Brady.  Not a bad guy to be connected to as Thomas begins trying to help the Celtics get back to a championship level.

“To see a kids’ face light up,” said Brock.  “I don’t care if his grandfather was his age when I played, for all I know and for all it matters, but we’re carrying this logo and it means something to them.”

These events are held across New England, but it was the first time the event was held in Burlington, with children from all walks of life taking part in the camp.

Ebner Battling the Rigors Of Rugby – Nate Ebner knows what it’s like to be in the NFL, but apparently his stint with the Olympic Rugby team may make his workouts as a Patriot look like a walk in the park by comparison.

Ebner, who is away from the team pursuing his Olympic aspirations in rugby, recently told the L.A. Times that the amount of work involved is taxing.

“I literally feel like my lungs are sore,” said Ebner.

“The feeling o fatigue you get from this game is unbelievable,” Ebner added.  “You work yourself to exhaustion and think, man, it’s never going to get any easier.”

That’s likely music to Bill Belichick’s ears after the Patriots coach said he expected Ebner to be in shape when he returned to the team.

“Even though he will be away from our team during an important period of our off-season, he will still be getting excellent physical training and I expect him to be ready for the football season like he always is,” Belichick said in a statement.

It sounds like he’ll be in better shape than his teammates by the time he comes back.