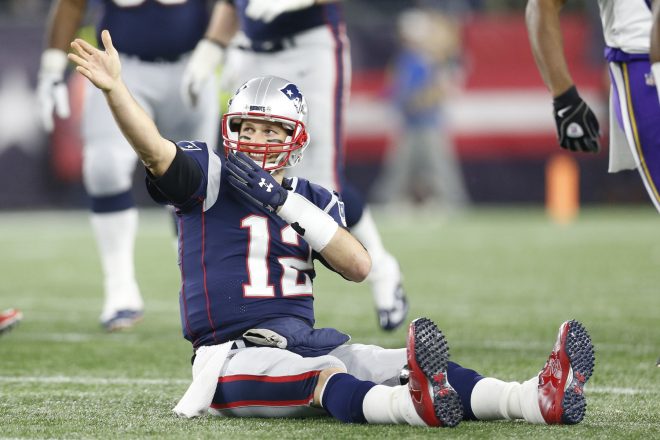 The Patriots took a workman-like approach to the game on Sunday and ground out a hard-fought 24-10 victory over the Minnesota Vikings. The victory moved the Pats to 9-3 and they have kept the #2 seed behind Kansas City who beat the Raiders on Sunday.

All week there has been some loud noise from the doubters stating that maybe this team wasn’t as good as some of the other Patriots teams in the past and that the defense, bereft of playmakers would be the Achilles Heel of them. That remains to be seen but the indications are that this team is rounding into form defensively.

It was the defense that stepped up, limiting the Vikings to just 10 points. Kirk Cousins was frustrated all night long as the Minnesota deep passing game was taken away and he was forced to check down for passes underneath.

He completed eight passes to Dalvin Cook out of the backfield but for just 22 yards. The tackling and coverage were terrific on those.

The Patriots secondary was outstanding, the dynamic duo of Adam Thielen and Stefon Diggs was held in check. Combined, they managed 10 catches for 77 yards and one touchdown. Thielen who had nine 100 yard games entering the contest was held to just five catches for 28 yards and a score. Diggs had five for 49. Mission accomplished

It was truly a collaborative effort when combatting Thielen who has been tearing it up in the league this season. Jason McCourty drew the assignment when Thielen lined in the slot. Stephon Gilmore covered Thielen occasionally when he was on the outside. Rookie J.C. Jackson even lined up on him once or twice.

Some observations from the game include:

On some levels, it still seems like the team doesn’t really know what it has offensively. It really seems like Josh McDaniels and the offense is playing their cards close to their vest. They mixed things up nicely on their opening drive, a variety of runs, screen passes, and misdirection had the Vikings on their heels. They scored a touchdown but then would only add three points for the rest of the first half.

They stayed conservative until late in the third quarter and then Tom Brady began pushing the ball down the field and they quickly found their rhythm. While we believe that the Patriots should be scoring more than 24 points (they certainly believe that) the fact that they rolled up 471 yards of offense on the third-ranked defense in the NFL.

Brian Flores Is More Aggressive Than Patriots Teams in the Past:

The Patriots defense came into this one looking to try to limit the Minnesota deep passing game. They did it extremely well, with very good coverage and an aggressive blitz scheme that keep the Vikings on their heels and made them earn every yard down the field.

The Vikings were just 3-12 on third down for the game as Flores did a tremendous job of disguising their coverages and looks and dialing up the pressure that made Cousins have to get rid of the ball to his check down receivers.

Cousins burned them on it, as can happen when they beat the blitz during the Vikings only touchdown drive at the end of the first half. That’s the risk you take but overall the unit played very well. And they never went away from it. They were willing to concede the running game (95 yards on 13 carries) by getting after the passer. Trey Flowers was terrific once again.

We wrote before the game, lost in all of the talk about the yardage allowed by the Patriots defense thru the air was the fact that they were the 6th best team in the Opposing QB rating with a mark of 87.3. Cousins’ QB rating for Sunday was 70.3.

I like that the Patriots are working in Obi Melifonwu into the game plan covering tight ends in the dime package. He was competitive going against Kyle Rudolph and certainly looked like he knocked the ball out on the sidelines. But the officials ruled it a catch. On that subject, Lativius Murray still hasn’t reached the sticks on the 4th and 1 run…no evidence?

Gordon Invisible For a Half Then Bursts Out:

Something that goes along with McDaniels playing things close to his vest was the game of Josh Gordon. He wasn’t even targeted in the first half. Then after Minnesota tied the score, the offense looked his way when he and Brady began the next drive hooking up for a 24-yard catch and run. They’d finish the drive in a similar fashion.

On a 1st-and-10 from the Vikings 24-yard line, Brady stepped up in the pocket and found Gordon all alone inside the 10. He found the open spot in the Vikings zone coverage, and Brady zipped him the ball. Gordon caught the pass at the 7-yard line, and easily cruised into the end zone. He finished with three catches for 58 yards and the score.

After the game, he was asked the significance of catching Brady’s 500th TD pass and then his 579th career pass (including postseason) to tie Peyton Manning and he had this to say.

“It must be fate. I won’t say coincidence, but it’s great to be on the receiving end of it,” Gordon said. “Extremely humbled to come out here every Sunday and get a chance to play, let alone with Tom Brady, the greatest to ever do it. So to be part of history with him? I can’t really even put the words to describe what that means to me. It’s just great to have the opportunity.”

Coming into this game, the thought was that the Patriots couldn’t run the way they did against the Jets when they ran for over 200 yards. They didn’t, but they came pretty close, running for 160 yards against a much, much tougher Viking front seven. The offensive line led the way with a very strong performance and didn’t allow a sack of Brady on the night.

Sony Michel led the way with 63 yards on 17 carries but seven different Patriots ran the ball in a team-oriented win. Rex Burkhead returned and had seven carries and two pass receptions. James Develin showed some respite for the short-yardage game with two short touchdown runs.

Cordarrelle Patterson played against his former team and accounted for 114 yards with 1 carry for six yards, 2 catches for 53 yards and 2 kickoff returns for 55 more. James White had six carries for 26 and seven more catches for 92 for 118 yards.

So with the Pittsburgh Steelers blowing a big second-half lead to the Chargers, that drops them a game and a half behind New England for the #2 seed. But Houston won again and has the same record so they can’t falter now.

The Patriots move on to Miami for a “Hat and T-shirt” game for the division win next week. That’s always the first goal, win the division, get a first round bye….etc.