4 years ago at 6:45 am ET
Follow @SteveB7SFG
Posted Under: Patriots Commentary 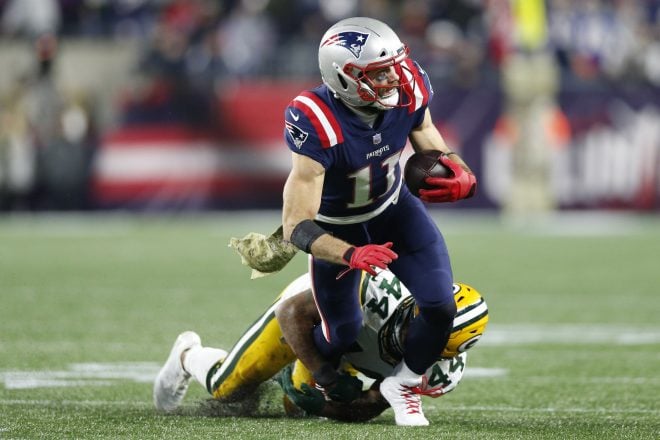 Big Game Before the Bye

The New England Patriots head down to Nashville to take on the Tennessee Titans on Sunday afternoon at 1 p.m. If it seems rare to have a Sunday afternoon game, it has been. The Patriots have played four of their last five games in primetime, something Bill Belichick mentioned and remarked he was glad to be finished with.

The Titans are 4-4 and are an intriguing matchup. What immediately jumps off the page is the former Patriots on the other side. With Head coach Mike Vrable, Logan Ryan, Dion Lewis, and Malcolm Butler, there are plenty of familiar faces there.

Tennessee isn’t a prolific scoring team. They are big on both sides of the line. Their game is to keep things close and get into a smash-mouth four quarters football game. Obviously with a team ranked #30 in passing yardage, the Patriots want to get out to an early lead and force them into playing catchup.

The Patriots first round draft pick is said to be playing this week. If he does and is healthy, he’ll give the Patriots a huge boost offensively as when he’s been on top of his game, he gives them the balance that makes them very hard to stop.

Tennessee’s run defense was poor early in the year but has improved recently. They held Ezekial Elliott to just 61 yards rushing on Monday night. But with the weapons the Patriots and Tom Brady have in the passing game, they can’t overload the box and dare them to throw.

Michel just prior to getting hurt against the Bears was really getting into a groove. We’ll have to see if there is a rust factor after missing more than two and a half games this week. But I’d expect the Patriots to use him early in this one to try to set the tone.

The Patriots very versatile and talented defensive lineman had another standout game last week versus Green Bay. The Patriots kicked him inside to bring extra pressure on Aaron Rodgers. He was outstanding and has really elevated his game the past few weeks. He’s heating up at just the right time.

This week, they’re facing another mobile quarterback in Marcus Mariota, someone Belichick said this week is more mobile than anyone they’ve faced this season. While that may be a bit of a stretch, Mariota can definitely make plays with his feet. So, not only will the Patriots be looking to pressure Mariota but to contain him in the pocket as well.

This will be an interesting matchup, Flowers is heating up and facing an OL that has allowed 26 sacks on the season. If the Pats can force the Titans into being one-dimensional, it will allow Flowers and other edge players to be a bit more aggressive in their pursuit.

The Patriots will be facing two of their former corners this week in Ryan and Butler and everyone is assuming Gordon will operate opposite of Butler this week. I actually believe it may be Ryan, but regardless, whoever it is, will have some help over the top and will have their hands full taking on the big and talented Pats wide receiver.

Gordon right now is just beginning to get healthy, he’s been bothered by a bad hamstring since he was in Cleveland. He was removed from the injury report and like Flowers, he’s getting hot at precisely the right time. He had his biggest game as a Patriots last week and the Patriots will be looking to get him involved and test their deep part of the field this week. If it is against Butler, look for the Titans to give him help over the top.

If he’s facing Ryan, look for a couple of jump balls down the sidelines. Brady and the Patriots remember the Super Bowl against Seattle where he had issues defending those and was replaced…by Butler. Familiarity works both ways.

The linebacker who is so valuable (and so unpopular for some strange reason with one Boston radio station) has been also elevating his game of late and is one of the Pats most versatile defenders.

Van Noy does just about everything well and is very versatile. With a 1-2 punch of Derrick Henry and Dion Lewis at running back, the key for Tennessee is to get Lewis in space where he’s always been so elusive. It will be up to Van Noy to see that doesn’t happen this week.

Look for Brian Flores to use Van Noy to mirror Mariota this week and possibly use him for some A-Gap blitzes to force some mistakes in the passing game. This will be a big week for the defense that has been much better of late and will be looking to continue the trend.

The Patriots slot receiver had a fantastic game against the Packers, (71 yards receiving, 28 yards rushing, 37 yards passing) and is one of Brady’s most trusted receivers. He’ll probably face the Titans talented corner Adoree Jackson this week and that promises to be a great matchup to watch.

With Rob Gronkowski’s status in doubt, (we don’t think he’ll play this week), the Patriots will use Edelman to do the dirty work underneath along with James White to keep the chains moving. Pound-for-pound, Edelman is one of the toughest players on the Patriots and he’ll be looked to a lot in this one to set the tone against a tough, defense that is #1 in points allowed and #1 in the red zone.

We’re looking for those rub routes and shallow crossers to target the linebackers and getting them to move off the spot this week.