4 years ago at 1:22 am ET
Follow @bob_george
Posted Under: 2018 Patriots Regular Season 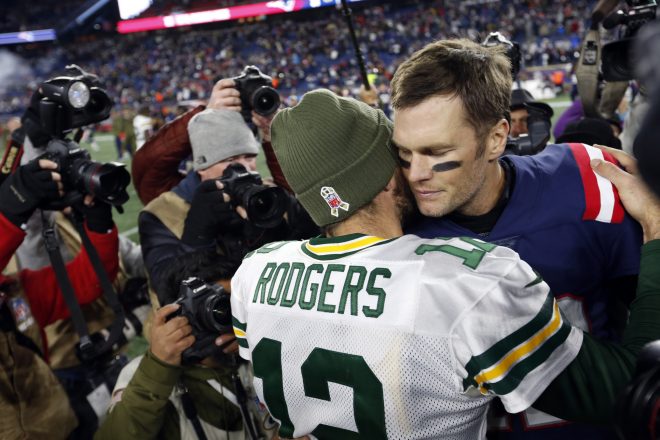 FOXBOROUGH – Much was made this week as to how seldom two generational quarterbacks actually face each other.  Football fans were treated on Sunday night to a meeting of two of the greatest.

Patriot Nation is fiercely loyal to Tom Brady, and understandably so.  He is almost universally lauded as the greatest quarterback ever, with so many records and accolades to his credit.  But Aaron Rodgers draws just as much adulation in Cheesehead Nation, and while he doesn’t stand toe to toe with Brady, is regarded as one of the best NFL quarterbacks of the last ten years.

The Patriots don’t often see Rodgers, as the Patriots and Packers play only once every four years.  Rodgers and the Packers bested the Patriots in their last meeting at Lambeau Field in 2004, holding on at the end for a 26-21 win.  Four years later, Brady and Rodgers meet again, this time at Gillette Stadium.  Brady was able to hold off Rodgers and the Packers, turning a recovered fumble, a double pass play, and a deceptive screen pass/slant route combo into a 31-17 win for the Patriots.  The Patriots are now 7-2 and in firm control of the AFC East.

For the first three quarters, the Packers were neck and neck with the Patriots, but it wasn’t because of Rodgers.  The Packer defense played a terrific game up until the fourth quarter, at times actually confusing Brady, and pulling off a terrific goal line stand at the one-yard line in the third quarter.  To the Patriots’ credit, they never panicked, they kept adjusting all game long, the Packers never led in the game, and the Patriots methodically went about their business until they were able to get a two-touchdown lead in the fourth quarter and some separation from the Packers.

Brady started off things by leading the Patriots on a frenetic, fast-paced opening drive featuring a hurry-up offense that was hard for even the working press to keep up on.  Starting at the 41, Brady featured James White on six of the ten plays, with White finishing it with an easy 8-yard touchdown run after a nice fake of an inside handoff to Julian Edelman.  The plays were executed in rapid fire succession at a very fast pace, and the Packers seemed powerless to stop them.

But Rodgers answered back with a 62-yard, 14-play drive.  Rodgers nickel and dimed the Packers all the way down to the Patriot 9, but a delay of game penalty helped to stall the drive, which begat a 29-yard field goal by Mason Crosby.  The Patriots can take solace that they kept Rodgers out of the end zone, but a 14-yard drive which keeps Brady on the bench for that long a time is more of a good thing for the Packers.

It was 10-3 Patriots late in the second quarter when Rodgers was able to pull the Packers even.  He drove the Packers 77 yards in 13 plays, finishing off with a 2-yard scoring toss to Devante Adams, who was left uncovered after Rodgers rolled out left.  Adams drew more attention from the Patriot defense all game long as opposed to Randall Cobb, but the Patriots missed the boat on this play and Jonathan Jones was the only defender close to Adams.

Brady was able to answer back on the following drive, and an unusual offensive source emerged.  Taking over at their own 31, Brady picked up 14 yards on three plays before the game took its first strange turn.  Cordarelle Patterson, known mostly for special teams returns and gadget plays with Minnesota, gained ten yards rushing on the next play.  Away from the play, Jermaine Whitehead seemed to slap David Andrews in the face.  Whitehead was flagged for a personal foul, and was also ejected from the game.  Replays seemed to show that Whitehead didn’t actually throw a punch, and that the ejection was questioned by Mike McCarthy.  The Patriots had the ball at the Packer 30, and Patterson covered the last 30 yards all by himself, running in for the touchdown from five yards out to give the Patriots a 17-10 lead at halftime.  Patterson ran hard every time he touched the ball, and seems to run backwards when he gets into a jam to prevent fumbling the ball.  But he did wind up leading the Patriots in rushing with 61 yards on 11 carries.

Opening the second half, the Packers came out with a 76-yard drive thanks largely to a 51-yard pass from Rodgers to rookie Marquez Valdes-Scantling, who beat Jason McCourty on a deep slant pattern.  Four plays later, Rodgers found Jimmy Graham from 15 yards out to tie the score at 17.

On the following drive, Brady drove the Patriots 74 yards to the Packer 1-yard line.  White and Patterson were stuffed on first and second downs.  Brady then misfired on third down after rolling out right, then on fourth down, Julian Edelman dropped a pass over the middle which was thrown behind him by Brady.  The Patriots were able to get the ball back after a three and out, but the next drive ended when Brady overthrew an open Chris Hogan on third down on a right sideline play.  Brady looked flustered at this point, misfiring on a play he usually makes in his sleep.

The Packers seemed poised to take the lead on the following drive, and drove from their 7 to the Patriot 24 thanks to two passes to Valdes-Scantling for 50 yards.  But on the first play of the fourth quarter, Aaron Jones ran around left end, but Lawrence Guy knocked out the ball and Stephon Gilmore recovered the fumble at the Patriot 24.  Brady took the Patriots on a ten-play, 76-yard drive and White finished it with a one-yard touchdown run to give the Patriots the lead for good.  Setting up that touchdown was a double pass from Edelman to White which nearly went the distance, going 37 yards down the left sideline to give the Patriots first and goal at the 2.

On their next drive, the Patriots sealed the deal with a nice 55-yard touchdown pass from Brady to Josh Gordon.  Gordon ran a slant route left, but Edelman ran a screen route inside and in the exact same passing lane.  Brady said in his postgame press conference that normally that ball goes to Edelman, who threw his hands up in the air.  The ball sailed over Edelman and right into the arms of Gordon.  Brady seemed to call the play an accident, but in real time it looked like Edelman was in the area and overthrown on purpose.  It was a brilliant play and throw nonetheless.

Just back from a quick trip to his native Puerto Rico with the World Series trophy, Alex Cora and a contingent of Red Sox players showed up to fire up the crowd.  The World Champion Red Sox certainly lit a fire under the Patriots Sunday night, and against Rodgers and the Packers, it was badly needed.