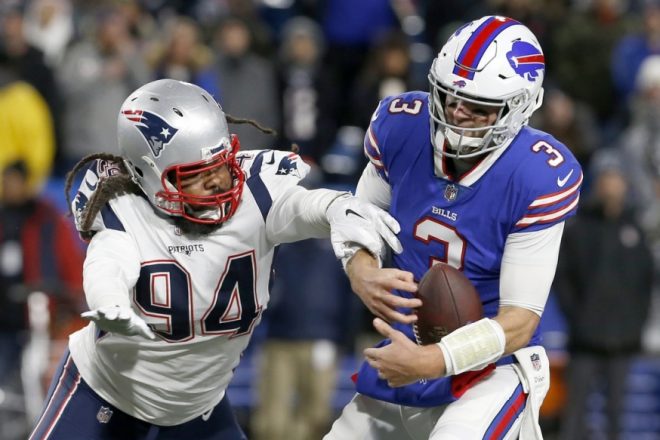 The Patriots have won five in a row and have opened up a good bit of distance between themselves and the rest of the AFC East, at the halfway point of the season. They currently have a two-game (with a tiebreaker) lead over Miami. They took care of business in Buffalo winning 25-6 despite the offense struggling to finish drives.

The lack of Sony Michel really hurt the running game and that was a big reason for the lack of finish when it comes to the offense. They pressed Cordarrelle Patterson into running back duty for the game.

But the defense was very good against arguably the worst offensive team in the NFL. But regardless, they shut down the run and scored a touchdown defensively while holding the hapless Bills’ offense to just two field goals.

Tom Brady was not at his best in Buffalo with several passes that were off the mark, most notably, the red zone incompletion to James White that skipped off the ground a good 2-3 yards in front of White, which cost the team a touchdown and a late throw on a screen that was nearly picked off.

However, he was under pressure for a good portion of the night as the Bills were getting good pressure up the middle which definitely hinders his ability to step into his throws. The Bills did a very good job of getting after him, partly because of the lack of the running game.

Brady did have several excellent passes as well. His third down laser to Edelman for 26 yards was a beauty as well as his back shoulder passes in the red zone to Chris Hogan and Rob Gronkowski. Brady was the first passer in 16 games to throw for 300 yards (324) against the Bills.

James White couldn’t get anything going in the running game but in the passing game, he was money as always catching 10 passes for 79 yards. Patterson, as we mentioned above, stepped into the tailback position. He did rip off a nice 22-yard run in the second half. While Patterson isn’t suited for that, it should be noted that he led all running backs (both teams) in terms of carries and yards…

Brady got into the act with a slow-motion eight-yard scramble for a first down and Edelman had a couple of carries on the jet sweep. James Develin was solid as usual in the blocking game and was targeted a few times in the passing game. Brady tried his best Develin impression on Lorenzo Alexander and was leveled, but he got in the way long enough to spring Edelman past the line of scrimmage.

The wide receivers had to fight for everything as the Bills were dropping into a two-deep zone and allowing the short passes underneath but tried to take away everything in the vertical category. Julian Edelman had a terrific game, he was finding the soft spots in the zones and was being hammered when he caught the ball. His 26-yard reception was huge on third down. He finished with 9 catches for 104 yards.

Josh Gordon (who played the entire game despite reports to the contrary) didn’t have a big game. He misread a deep ball by Brady on the first series, that may have gotten knocked down with the wind when he had clear separation. But he made a nice 18-yard grab on a slant but finished with just 4 catches for 42 yards.

Chris Hogan had just two catches but for 49 yards and that back shoulder grab down to the one-yard line set up the Patriots lone offensive touchdown. He’s still well within that Brady circle of trust.

Rob Gronkowski was coming off the injured list with ankle and back woes and he looked right neither in the passing game or in the running game. Gronk is normally a devastating blocker and he didn’t have that normal oomph which probably means that his back is still bothering him. He and Brady never got in sync in Buffalo and he was given extra special attention by the Bills secondary. He ended up with just 3 catches for 43 yards but his 22-yarder, with a defender all over him, while still having the presence of mind to get his feet down was a highlight reel catch.

The offensive line didn’t have a very good night. Granted, part of it was the lack of Sony Michel in the lineup. When Patterson was in the game, Buffalo knew they were going to run and they attacked the gaps. But the run blocking wasn’t there and because of that, Buffalo teed off with their pass rush.

The Bills only blitzed once or twice all night yet they got consistent pressure off of their front four and were pushing the offensive linemen back into Brady not allowing him to step into their throws. The proof was in the pudding, the Pats were just 1-3 in red zone opportunities and when you score one offensive touchdown but four field goals, you aren’t getting the push you need up front.

The defensive line had a very solid game. Bills OC Brian Daboll emptied the playbook on the first series of the game with the Wildcat, direct snaps to Shady McCoy and a flea flicker. After McCoy got 12 yards on his first carry of the game, things went progressively downhill for the Bills running game. McCoy finished with 12 carries for 13 yards. Buffalo only rushed for 46 yards on 19 carries. For a team that is run-first…that is a good job for the defensive line.

Trey Flowers was huge in this game. He was immense and very disruptive in the running game with two tackles for a loss. He had two quarterback hits and two pressures in the passing game. It was easily his best game of the year. Adrian Clayborn had a sack for the second straight game.

The Patriots linebackers were without Dont’a Hightower and we knew that Kyle Van Noy had to step up this week. And he certainly did. Van Noy was arguably the best Patriots defender on the field on Monday. He made 7 tackles, had 2 tackles for loss, 2 sacks and 2 QB hits. He was all over the field and disruptive. John Simon had a run stuff in his first action since getting injured a few weeks ago. Elandon Roberts had another gift interception go right thru his hands…sigh.

The secondary albeit against a bad Buffalo offense had a very strong game. Devin McCourty put the game away with an 84-yard pick six where he perfectly read the play down the middle of the field. Stephon Gilmore was outstanding and did a great job of blanketing Kelvin Benjamin. Pat Chung was outstanding and allowed just five catches for 35 yards while being targeted 10 times. And he fell on and recovered the fumble that Van Noy forced. Overall, when your defense outscores the opponents’ offense you’ve had a very good effort by the team.

The Special Teams are not performing to the level that we’ve been accustomed to (spoiled with?) the past several years. Once again we have to ask, was Brandon Bolden and Jordan Richards that valuable to the Patriots STs? A silly penalty on Julian Edelman for a block after calling for a fair catch, an illegal formation call on a kickoff, where a player holding the ball for Gostkowski wasn’t covered up right by the other players. A poor punt and worse coverage allowed the Bills a 30-yard return which put them in field goal position. Stephen Gostkowski was the lone bright spot kicking four out of five field goals. His lone miss from 50 we’ll give him a pass on since Lawrence Guy was flagged for holding on the play and would’ve wiped it out anyway. Joe Judge needs to light a fire under those guys this week.

Offensively, the team never looked in sync and the play calling while at times very good was suspect in a few others. On the third and two call at the Patriots 12-yard line, Buffalo knew the Patriots were going to run and snuffed it out easily. That would have been time for a play-action pass.

But in the end, they were on the road against a divisional opponent with a loud, raucous crowd, intent on throwing sex toys on the field again…and got the job done. We’re on to Green Bay.