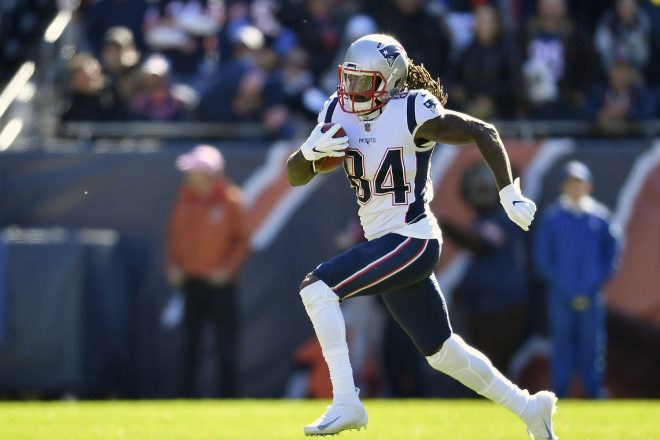 Did you Know? Bill Belichick has coached the Patriots since 2000 and we’ve all seen some of the crazy stats that the team has amassed since then. One statistic that stood out and one that we haven’t seen before was even more startling. Although the Patriots lost the turnover battle last week in Chicago they ultimately won the game 38-31. But since 2000 when losing the turnover battle the Patriots are 38-37, or slightly over .500. But the rest of the NFL when losing the T.O. battle is just  713-2765-8. The next closest team in Indy who is winning at a .340 percentage.

Kyle Van Noy feels blessed to be part of the Patriots and on the anniversary of his trade to bring him to New England, he posted his feelings on his Twitter account. “Happy anniversary to me and my trade day! What a day that turned out to be!” #blessing #thanksbilltrill #thanksbob #champ

His worth is felt by Bill Belichick, “Kyle has a lot of versatility for us,” Belichick said. “Play the run, rush the passer and play in coverage. He does a good job at all of them and his versatility has been valuable for us.”

Patrick Peterson to the Patriots was never a rumor that we put much stock in here, it was totally debunked when Tom E. Curran of NBC Sports Boston, said his sources told him that the Patriots never reached out at all. However, (comma), the trade deadline is just a few days away, what positions could the Pats be targeting? Hmm, an interior pass rusher, a running back or my choice, a sub-package linebacker who’ll have the speed to cover. Arizona has a pair of former first-round draft picks who are on the trading block because they don’t the new system. Deone Bucannon and Haasan Reddick are the two names that come to mind.

Nate Solder has told the media, that he does not regret leaving the Patriots for the New York Giants even though he’s lost more games (six) in the first seven weeks than he did in any Patriots season, even the past two years combined. “I was certainly not expecting [the trades], but I am so thankful to be here under the leadership of [general manager Dave] Gettleman, coach [Pat] Shurmur,” he said.

“I just think that they’re building this thing the right way. I believe in those guys tremendously. All of the decisions they made I fully support, and whatever that means, we play it out however it needs to be played out.” Of course, signing a four-year, $62 million dollar deal helps ease the sting of those losses a bit.

Melinfonwu is an Intriguing Player That the Pats Brought In:

The Patriots brought in three free agent players this week for workouts. As usual, they’re updating their emergency lists or just to get a feel for some players and see what makes them tick, just in case they meet them down the road. The team brought in TE Ben Koyack and DB Dexter McCoil but the real intriguing name was Obi Melifonwu.

Melifonwu is from Grafton, Mass and attended UConn after high school. At the NFL Combine last year, the uber-athletic safety put on a show. His sheer athleticism and elite size, (6’4, 225), put him on the Raiders radar and they snagged him with the 56th pick

His rookie season was marred with two stints on IR, the second was a hip injury that required surgery. He was just getting back on the field this summer when he injured his knee and the Raiders, under a new regime cut their ties to him.

We spoke to him very early in the spring and his rehab for his hip surgery was still a slow process, which is normal for those type of injuries. But apparently, Gruden, who didn’t draft him wanted to go in a different direction.

But the Raiders never really had a plan on how to use him, something that New England and Bill Belichick wouldn’t have any issue in doing. He was a bit frustrated with Oakland. A source close to Melifonwu told us that last year he had just started practicing before the Patriots game as he came off IR.  He said that on Thursday, he’d practiced at safety but then on Friday during the walkthrough, he was told, he’d be playing corner, something he’d hadn’t practiced.

That didn’t end well for the rookie but if the Patriots were to sign him, he’d most definitely be used as a safety as his skill set is tailor-made for it. Our feeling here is …if he’s healthy would be a really nice addition to the backend of the defense.

Patriots Find Themselves in a Familiar Place:

The season started slowly at 1-2 for New England and of course, all of the talk was centered around “if this is the year” that the Patriots lose the stranglehold in the division. And that talk, as well as the demise of the team, seems to be once again premature.

With a win on Monday Night in Buffalo, the Patriots will enter the midway point of the season at 6-2 with at least a two-game lead over the Dolphins (with a tiebreaker) and the Jets. And the best part of it is that the team hasn’t even played their best football yet.

Miami got off to a hot 3-0 start, but since then it has been strictly downhill for the Fins going 1-4 and with questions about Ryan Tannehill’s future, the Dolphins are in for a lot of questions this offseason. Meanwhile, despite suffering a large number of injuries, the Patriots are in good shape to challenge for one of the top spots in the AFC.

Philadelphia vs Jacksonville in London: Eagles

Bills Hoping Anderson Turns it Around This Week:

The Buffalo Bills face the daunting task of taking on their nemesis, the New England Patriots and Tom Brady this week. Their record against Brady is 3-28 and the Bills enter this week 2-5, while the Patriots, winners of four in a row are 5-2. But if they’re going to have any chance of upsetting New England, they’ll have to be a much better effort than last week from QB Derek Anderson.

Anderson, taking over for the injured Josh Allen last week, had a rough game, turning the ball over four times, three interceptions and a fumble. Having been only in the Bills’ system for three weeks, there are still plenty of things to learn for Anderson, in terms of the playbook.

He will, however, have a few things going for him. This will be the Bills first Monday Night home game in about a decade and it guaranteed to be rocking.

Anderson has already shown some decent chemistry with Kelvin Benjamin but he really needs to get on the same page and quickly with Charles Clay. The big tight end should be a big part of the game plan this week as New England has had issues covering tight ends.

The Miami Dolphins as we mentioned above started the season strong, especially on defense where they thought they’d made several improvements. But since the Patriots throttled them a month ago, they’ve really struggled and Thursday Night’s showing against the Texans was particularly poor.

The Texans big four playmakers had tremendous games against the Dolphins, QB Deshaun Watson completed 80 percent of his passes and had a QB rating of 156. The big duo of DeAndre Hopkins and Will Fuller combined for 206 yards and three TDs. And Lamar Miller ran for 133 yards. After allowing the Lions to rush for 248 yards, Houston ran for 188 more and averaged 5.4 yards per carry.

And with a pass rush having the likes of Robert Quinn and Cameron Wake facing a Texans offensive line that has surrendered the most QB hits and sacks in the league, the Dolphins logged just one QB hit and zero sacks.

The Dolphins and coach Adam Gase are at a critical point of the season. They’ll have to turn things around and quickly, especially on defense this season if they are to make any noise this season. Otherwise, Gase’s seat could go from warm to hot this winter.

The New York Jets head out on the road to face the Chicago Bears this week and after watching the tape of last week, know that they must do a good job of limiting the scrambling ability of QB Mitch Trubiski who ran for 81 yards a week ago against New England.

The Bears offense, currently #6 in the NFL averaging 28.3 points per game is definitely being helped by the running of Trubiski who has rushed 31 times for 245 yards and a pair of touchdowns this season.

“He does surprise me, actually,” DE Leonard Williams said. “You see some running quarterbacks that are able to run, but he actually looks like a runner when he’s running. He doesn’t just look like a fast quarterback. I think that’s definitely a challenge.”

Coach Todd Bowles is preaching a total defensive effort this week but the Jets have fared fairly well thus far against mobile QBs in 2018. Against the Browns Baker Mayfield and Tyrod Taylor, Gang Green allowed just six rushes for 20 yards. Blake Bortles scrambled for 28 yards on three carries and Ryan Tannehill had 44 yards on eight scrambles.

For the Jets to pull off the upset, they’ll need to limit their turnovers and contain Trubiski in the pocket. Something the Patriots couldn’t do.