4 years ago at 9:07 am ET
Follow @SteveB7SFG
Posted Under: Patriots Commentary 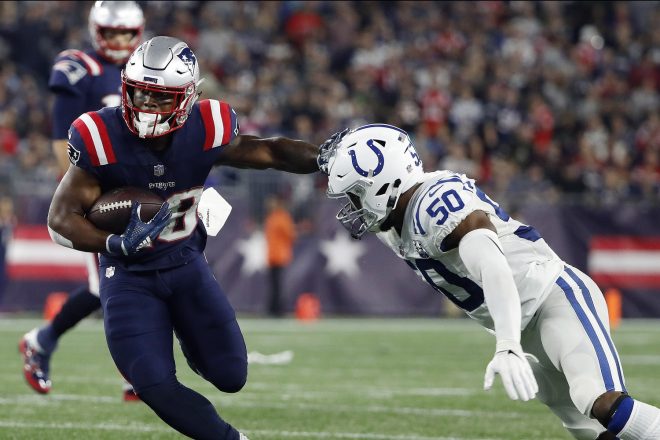 The New England Patriots are playing the Kansas City Chiefs on Sunday Night Football in a much-hyped game for Week 6 in the 2018 NFL season. Except for Bill Belichick that is. Belichick wasn’t buying into all the talk for playing for AFC supremacy, home-field advantage or anything else. On Thursday at his press conference, he was asked a few times about how he feels about the significance of the game. Belichick’s not-so-surprising response… “it feels like we’re playing Kansas City.”

But make no mistake it is a big game for both teams. The Chiefs have been on a roll and are 5-0, they want to continue their dominance and build upon that. But they also know they were in a similar position a year ago when the wheels came off. The Patriots started badly at 1-2 but have played much better the past two weeks and now it begins a very tough stretch of games for them.

This game features two very intriguing QBs, Tom Brady, the reigning MVP and winner of five Super Bowls and Patrick Mahomes, the second-year player making just his seventh start in the NFL who has been lighting the league on fire for the first month plus. Their skill sets and strengths are pretty different and each will have the chance to showcase their talents again on the big national stage on Sunday Night.

The Patriots rookie running back is actually questionable to play with a knee injury and was limited in Thursday’s practice session. It isn’t known if this latest injury is a continuation of his knee that was drained of fluid during training camp or it is another new injury that he suffered during the Thursday night game against the Colts.

Michel in the past two weeks has gained over 200 yards and has been really rounding into form after missing all of the preseason games this summer. He has begun to show the form that he exhibited in college that attracted him to the Patriots this spring and gives them a dynamic back who gain can break a small run into a big one.

He should be (if he’s good to go), a big part of the game plan this week. The Patriots will look to stay balanced and run the ball, controlling the clock and keeping Kansas City’s pass rushers off balance. And the best way to do that is running the ball right at them.

The Patriots newest wide receiver has still only been a member of the team for about a month and is still learning the playbook and the route tree for the Patriots wide receivers. So far, the results while encouraging, have been small in relation to what his potential can be. Gordon has been saying and doing all the right things and his teammates seem to be completely behind him.

This might be a week where the coaches try to get him a bigger piece of the game plan and try to stretch the field more vertically. We saw last week, the Jaguars try to the same thing time and again, and while it was successful a few times, their protection didn’t hold up enough to make it viable.

The Patriots could opt to do some of the same, especially if Eric Berry and Justin Houston are out. Gordon has the size and athleticism to be a huge target down the field, opening up all kinds of room for guys like Julian Edelman and Rob Gronkowski to work the middle of the field.

Assuming everyone is healthy (or reasonably so) and on the field, White could be the Patriots “X-Factor” this week in the passing game. As we wrote in our keys to the game earlier this week, with the Chiefs having to cover Gronk, Edelman, and Gordon, it opens White up as the movable chess piece for Brady to use in the air.

While Michel is the valuable piece in the ground game, White is the Swiss Army Knife for the passing game. Look for Brady to put him in motion and try to isolate him on a linebacker where they can possibly get a mismatch.

White is one of the most dependable, versatile players on the Patriots offense. He can do it all, run between the tackles, catch out of the backfield, and pass block. He and Michel will no doubt feature prominently this week.

With all of the league abuzz, and rightfully so over the early season excellence of Patrick Mahomes, Brady is usually a player that will use that fact as fodder to motivate himself to elevate his game this week. Not that he should need any extra motivation. The past two games against Kansas City have ended badly for New England.

Brady started slowly this season, but the past two games, he’s looked much better and is getting hot at just the right time. The Patriots will need a big game out of him, and with many questioning, whether New England is ripe to fall, this game against the undefeated Chiefs will be a big measuring stick.

Brady will look to start quickly this week, something he did against the Colts where he went 9-9 for 75 yards and a touchdown pass to Cordarelle Patterson. KC’s defense has given up a ton of yardage but has been very stout on 3rd down, which will automatically be something that will bear watching this week.

The Patriots defense has a pretty heavy task in front of themselves this week, in trying to scheme a way to slow down the high flying Chiefs’ offense. To do so will require a total solid defensive effort but a couple of players must have strong games on Sunday night. And it starts with Chung and Van Noy.

The Chiefs’ RPO (run/pass option) game is strong and gave the Patriots fits last year, not only against the Chiefs but in the Super Bowl against the Eagles. No doubt Andy Reid took note of that. Van Noy will need a big game this week. KC likes to fake the run and get Travis Kelce that deep open space behind the linebackers with lots of room to move. Van Noy will have to get the depth and take away those easy passes.

Chung is outstanding in run support and he’ll probably draw the task of covering Kelce much of the time. It will be an interesting chess match. It won’t be an easy one to win but they should have a good game plan in place.

By: Mark Morse
Observations from the latest Patriots practices and some additional notes.
14 hours ago

By: Ian Logue
New England Patriots news and notes for Tuesday 8/9.
15 hours ago