4 years ago at 11:06 am ET
Follow @IanLogue
Posted Under: Patriots Commentary 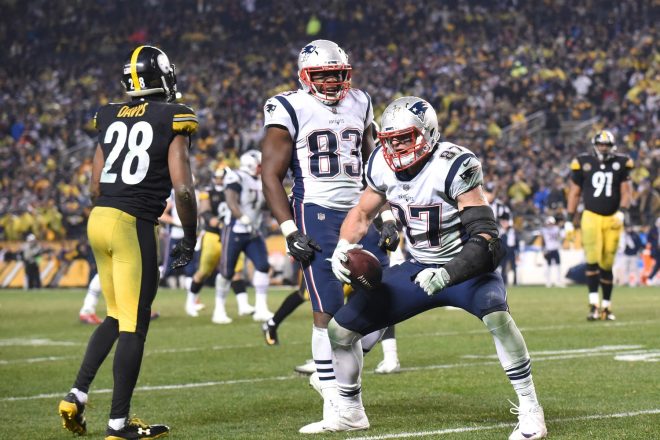 It’s been a while since fans have seen Rob Gronkowski spike a football, but through five games Gronkowski is still on pace for another Gronk-like year.

The veteran tight end last spiked the football back in week one when he scored on a 21-yard acrobatic play in the first quarter against the Texans, which saw Brady make a back-shoulder throw in double coverage where Gronkowski spun and managed to cross the pylon for New England’s first touchdown of 2018.

It was a great play, but that’s been the last time we’ve seen him score.  From there, two straight losses saw Chris Hogan (2) and James White (1) as the only two receivers to catch a touchdown pass from Brady while no running backs also crossed the goal line.  In their last two wins, Brady’s thrown three touchdown passes, with White, Josh Gordon and Corradelle Patterson each on the receiving end of scoring throws from the quarterback, while Sony Michel and Brady each crossed the goal line on the ground.

But no Gronk spikes.  Is Gronk worried?

“No, we’re winning,” said Gronkowski, who was asked about his touchdown drought on Wednesday.  “We’ve won the last two. I’ve got to pick it up. I’ve got to start scoring.”

His current drought hasn’t hurt him in terms of his touchdown totals from last season.  Through five games, he had just two receiving touchdowns this time last year compared to the one he has this season, and he’s actually three receptions ahead of what he had hauled in at this point in 2017 (he has 23 so far, compared to 20 last year).

Speaking of which, it’s interesting to look at the red zone totals, which are interesting.  Gronkowski is surprisingly without a reception in scoring territory so far this season, but that drought is eerily similar to what he endured last season after having been targeted six times with just one reception, which was a touchdown.  Like last year, the team was still adjusting to losing Julian Edelman during the preseason, while this year they were obviously without him during his four-game suspension.

As for receiving yards, Gronkowski is just 10-yards behind where he was last year at this time, having compiled 308-yards compared to the 318-yards he had last season.

Gronkowski doesn’t appear to really know that despite his slow start, he’s right on par with where he was through five games last season.

When asked about his incentives in his contract, Gronk downplayed it and said he’s just trying to make sure he remains focused on what he’s supposed to be doing out there and he’s not worried at all.