4 years ago at 9:36 am ET
Follow @IanLogue
Posted Under: 2018 Patriots Regular Season 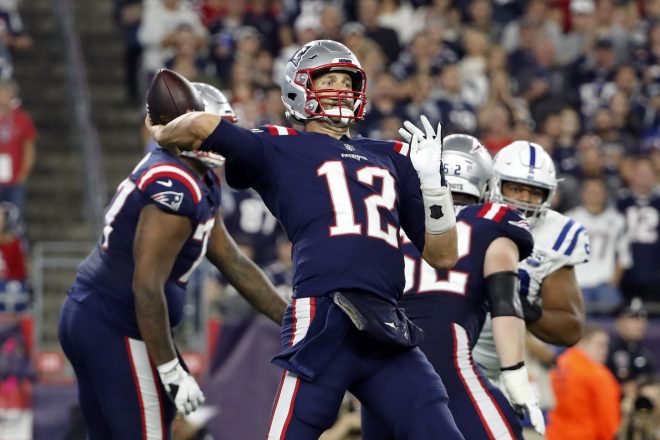 Thursday night’s win over the Colts was a tale of two halves but it was the team who knew how to close who ultimately came away with this one after a 38-24 win to improve to 3-2 on the season.

Here are some things we learned following the win:

1) Uncharacteristic Turnovers Nearly Got the Colts Back Into the Game – Thursday night’s win over the Colts had the makings of a blowout, but the Patriots had some difficulties in the second half that nearly allowed Indianapolis to make this a game. After building a 24-3 first-half lead, the Colts scored on their second possession of the second half to cut the lead to 24-10 and it seemed that the Patriots were poised to answer after Tom Brady drove the offense from their own 32 down to the Indianapolis 30yd line.  But facing 2nd-and-8, Brady fired a pass to Chris Hogan that went off his hands and was snatched out of the air by Colts safety Matthias Farley.

However, on the next drive, Devin McCourty ripped the ball out of the hands of Colts running back Jordan Wilkins on their fourth play from scrimmage, giving the ball back to New England’s offense at midfield while seemingly killing any momentum the Colts appeared to have.  Unfortunately, for the second-straight possession, the offense imploded again after getting down to the Indianapolis 25-yard line.  Facing a 2nd-and-20, Brady threw a deep pass to tight end Rob Gronkowski, but the ball went off his hands back up into the air and into the hands of linebacker Najee Goode, who came down with the football.  The play was initially ruled and catch and fumble by Gronkowski, but was later changed to Brady’s second interception of the night.

The Colts took advantage, driving 80-yards on 10 plays where Andrew Luck found Erik Swoope for a 13-yard touchdown pass to pull Indianapolis to within 7 points at 24-17.

But fortunately, New England got it together on the next drive and went back to work, with Brady moving the team 75-yards on 6 plays, the last of which ended up being his 500th career touchdown when he found Josh Gordon from 34-yards out for a score to put them up 31-17 with 9:19 left to play.

Unlike the Patriots, the Colts were the ones who ultimately fell apart after Luck was picked off by Jonathan Jones on their next possession, with running back Sony Michel immediately scoring and putting this one away, with the rookie taking off for a 34-yard touchdown.  That play proved to be the dagger as it put the Patriots comfortably in front after they extended their lead to 38-17.

But that sequence of bizarre events could have been the difference in the game and fortunately, the more disciplined team ultimately won the game. 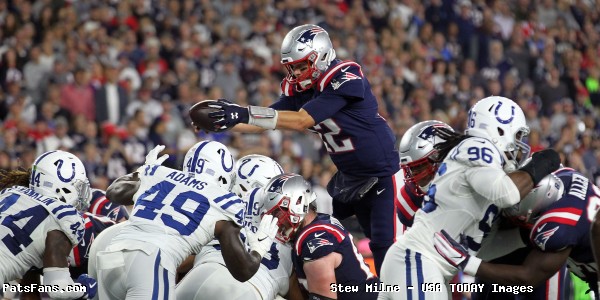 Brady had a big night during the win. (USA TODAY Images)

2) A Record-Breaking Night For Brady – Brady said earlier in the week on his weekly appearance on WEEI that he was unaware he was close to 500 career touchdowns and thankfully he reached that milestone in front of the home crowd while setting yet another record in the game.

His 500th scoring throw came in the fourth quarter after Brady answered a touchdown by Luck with a 34-yard scoring strike to Josh Gordon, which saw Gordon also become the 71st player to have a touchdown reception from Brady.  The latter total moved Brady ahead of Vinny Testaverde, who held the previous record having connected with touchdown passes to 70 different players.

Overall, Brady finished the night with three touchdowns, the second-straight weekend he accomplished that feat after throwing three on Sunday against Miami. He also leaped up and in for a rushing touchdown, which came on a 3rd-and-1 down at the goal line early in the second quarter and put the Patriots up 14-0.

The win was also Brady’s 226th career win as a starter (including the postseason), which tied him with Colts kicker Adam Vinatieri for most all time.

3) Another Solid Outing For Michel – Despite some struggles, running back Sony Michel ran the ball well and nearly broke the century mark in the ground game for the second straight week.

Following his 112-yard rushing performance against the Dolphins Sunday, Michel did another good job again Thursday night after finishing the contest with 98-yards on 18 carries, including his 34-yard touchdown run.  That run was the longest run from scrimmage so far this season for the Patriots and the second-longest since last season when Dion Lewis ran for 44-yards on the road against the Bills in Week 13.

Michel is seemingly starting to gain confidence and he’s done a good job of burning up yards up and down the field, having played a key role in each of New England’s recent back-to-back wins.  It’s good to see him making progress and even better to see him finally break off a big gain, which should hopefully give him some additional confidence moving forward. 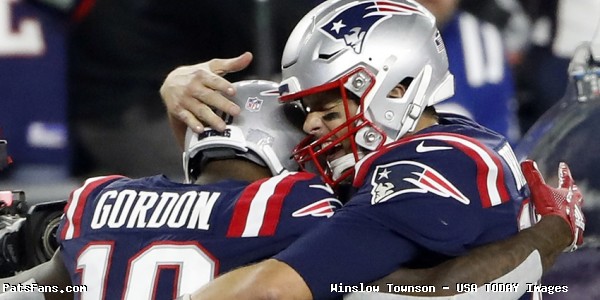 4) Memorable Night For Gordon – Josh Gordon came out of this game with two more receptions for 50-yards, but it was his 34-yard fourth quarter touchdown that will go down as the most memorable after he became the answer to the trivia question, “Which receiver caught Tom Brady’s 500th career touchdown?”  What was most impressive was the fact that Gordon was double-covered, yet he weaved his way in-between defenders and managed to come down with the football.

It was a clutch play and it drastically altered the momentum at that point as it put the Patriots back up by two touchdowns and kept them in control of the contest.

“That was a great play Josh made, you know, jumping over the top of two defenders,” said Brady on the play. “That tells you the kind of confidence I have in a really short period of time. You know, he’s earned it and happy to see him make that play.”

Through two games, Gordon now has 4 receptions for 82-yards along with his touchdown.

5) Tough Night for McCourty, But He Still Came Through – Veteran Patriots safety Devin McCourty had a tough time in coverage Thursday night as he was locked in a battle with Colts tight end Eric Ebron and the young player definitely got the better of the match-up.

Ebron finished the night with 9 receptions for 105 yards and when he and McCourty faced off, it was a mismatch that went in Ebron’s favor.  Still, give McCourty credit.  He never got down and he made one of the most electric defensive plays of the night when he ripped the ball away from Colts RB Jordan Wilkins, ending a Colts drive where Indianapolis was looking to capitalize on Hogan’s inability to haul in a Brady pass that lead to an interception.

“I’m just tackling him up high, and as I’m tackling him I feel like the ball is a little loose and I’m just ripping at it as we’re going down,” said McCourty of the play. “Got lucky, got the ball out, big play for us I think. Just turning the ball over always helps with our offense, they’re always going to score points.”

6) White Was Big, Yet Again – Running back James White had another solid outing, leading all receivers with 77-yards after tying a career high of 10 receptions on 14 targets, including a touchdown.

White may be one of the most quietly productive players we’ve seen for the Patriots, as what he does looks so effortless at times that he doesn’t get as much credit outside of New England.  Yet here he is, second on the team in receiving yards with 270-yards and leading the club with four receiving touchdowns.

One other thing that stood out was the fact that Brady was a perfect 6-of-6 inside the red zone, with White accounting for four of those receptions, including two first downs and a touchdown.

Ever the consummate teammate, White credited Brady for the performance after the game.

“He does a great job distributing the ball around and throwing to who’s open. There are a lot of guys involved in the game, so that’s what it’s going to take to win.” 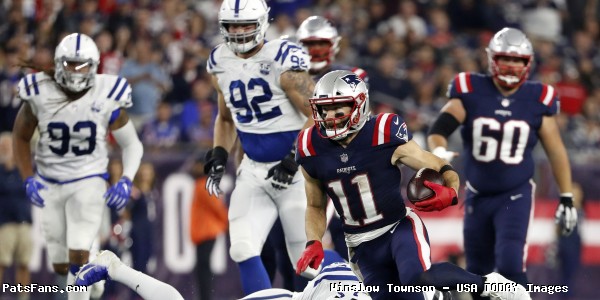 Edelman had a terrific night in his first game back. (USA TODAY Images)

7) Solid Return For Julian Edelman – Having spent 606 days since playing in a meaningful game for his team, the return of Julian Edelman certainly made a big difference Thursday night.

The veteran receiver was targeted on the first play of the game and overall finished the night with 7 receptions for 57 yards but the biggest difference was the fact his presence really opened things up dramatically for his fellow receivers, which played a big role in New England’s offensive success.

It wasn’t all perfect.  Edelman dropped a long pass on a 3rd-and-5 from the Colts 44-yard line that would have gone for a huge gain, but the veteran receiver’s adrenaline seemingly got the better of him in what was the only blemish on an otherwise solid return.

One other thing of note, Brady surprisingly finished 0-for-2 targeting Edelman on third down, which is unusual for a player who is normally one of Brady’s most reliable targets.  Overall he looked as quick as ever, including a strong performance returning punts in his first game back.

Bill Belichick said after the game that he wasn’t surprised with Edelman’s performance, noting that the receiver worked hard during the offseason and training camp and praised his work ethic.

“I mean, Jules [Julian Edelman] was with us all through training camp. He was here for all of the preseason games,” said Belichick.  “He was here for a whole offseason. He’s been attacking it very aggressively. Then at the end of the spring when he found out about the [suspension] – got the news on that, then when he came to training camp he came in with a strong purpose and worked really hard in camp. I mean he wasn’t here for a while, but every day that he’s been here all year he has put a lot into it.”

It’s definitely good to have him back and with a tough Chiefs club up next, the Patriots will certainly need him.