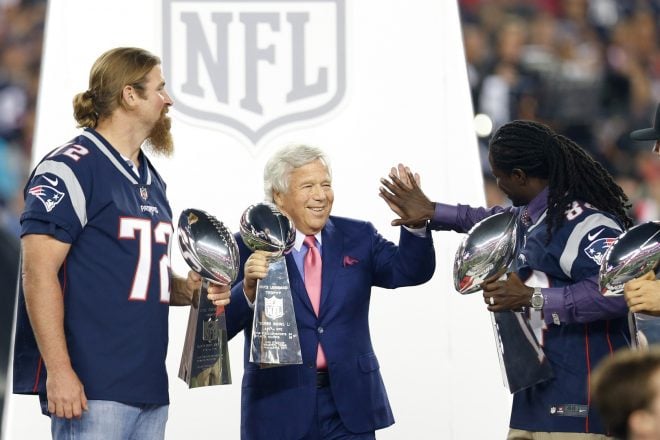 On Saturday, offensive tackle Matt Light was enshrined into the New England Patriots Hall of Fame.

Light, who spent his entire 11-year NFL career with the Patriots from 2001-2011, was voted in by the fans as the Hall’s 27th member, beating out linebacker Mike Vrabel and defensive tackle Richard Seymour this past May.

During his tenure, Light was selected to three Pro Bowls and the Patriots All 2000’s and 50th Anniversary teams.

Check out some of the best sights and sounds from his induction weekend below.

Perfect day for today’s @Patriots @TheHall of Fame ceremony. Congrats to @LightFoundation on your induction. pic.twitter.com/Xsec8knAaN

Congrats to Matt Light on being inducted into the Patriots Hall of Fame!!! Proud to have been his teammate. @lightfoundation #Patriots

"I've really looked forward to this day for my family and my friends. It's meant the world to all of us."

#patriots Matt Light wrote a song called Mustache Men! What better time sing it than his HOF induction when everybody has to listen! 🧔🏽🎤🎼🤦🏻‍♂️ pic.twitter.com/aBVL5foYsF

A look back on a legendary day.

TFW you’re officially the newest member of the @patriotshall.