4 years ago at 8:17 am ET
Follow @SteveB7SFG
Posted Under: Patriots Commentary 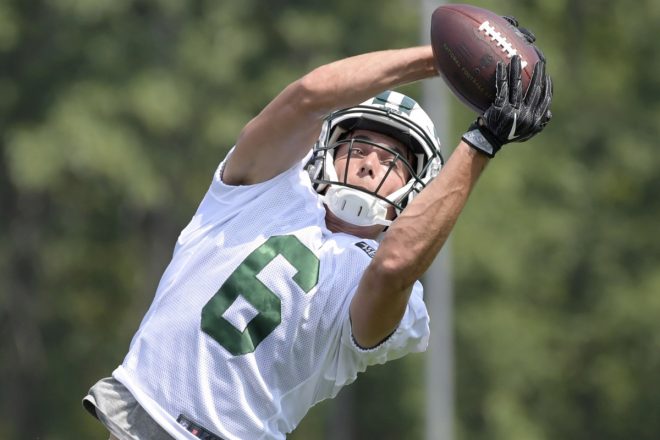 With the reduction of the NFL’s rosters down to the 53-man league-mandated maximum, the Patriots were left on Saturday afternoon with just four wide receivers, one of whom, Matthew Slater, is a special team’s ace. They plucked two intriguing players off the waiver wire, Amarah Darboh from the Seattle Seahawks and Chad Hansen from the New York Jets. Both were rookies in 2017 and had scant production from their respective teams.

But both enter New England with a clean slate and the opportunity to learn on the job. Learning on the fly is never easy, the Patriots offense and route tree for the WRs is complicated and not an easy one to learn. We’ve seen several productive veteran wide receivers come here and fail. So temper any expectations at the outset and let the process play out. At first glance, however, both players would be the type to fit in with what the Patriots offense likes to do. Will the Patriots make another move for a more veteran wide receiver? We still believe they will, but we’ll just have to wait and see.

Hansen is just 23 and spent last year with the Jets after being drafted by the Jets in the 4th round, 141st overall in the 2017 NFL Draft. In his only season with the Jets, he played in 15 games and caught nine passes for 94 yards, including one for 15 against the Patriots in the regular season finale in Foxboro. He had a very strong spring with the Jets before tailing off during training camp.

Hansen is the kind of chain mover that the Patriots like and can be used in a couple of ways. He can work inside and is good at coming back to the ball on dig routes, was a reliable man in the screen game, adept at making the first man miss, was very good at working the boundaries and had great awareness of the sidelines. He has really good hands and is able to occasionally fool a defender and blow past them to stretch the field.

His highlight film work reminds one a lot of Chris Hogan. He plays a bit faster than his timed speed. However, he struggled to gain separation from defenders which is probably why the Jets gave up on him after just one season.

Darboh had an unusual path to the NFL as his family fled war-torn Sierra Leone and came to the United States (Iowa) when he was just seven years old. He attended Michigan where he was the team’s leading receiver his last two years, catching passes in 33 straight games. He finished his senior season with 52 catches for 826 yards and seven touchdowns.

Darboh has the size/speed combination that most teams look for. He is 6’2, 215 pounds and ran a 4.45 in the 40 at the NFL combine, with a 36-inch vertical leap and 17 reps on the bench press. He was drafted in the 3rd round, 106th overall in the 2017 NFL Draft by the Seahawks. In his only season with Seattle, he caught eight passes for 71 yards. He primarily played on Special Teams and was a valuable asset on the Hawks coverage units.

Darboh can play in the slot or outside although at times he seems to play slower than his timed speed. But once he gets his hands on the ball in the open field can turn on the jets where his speed is apparent. He struggles against tight press man coverage and isn’t the quickest guy out of his breaks. He’s a good, tough willing blocker in the running game. His hands are great and suffers a lot of concentration drops.

Neither one is a punt returner, although Darboh returned three while at Michigan and could conceivably see some practice work there. It is interesting to note and see how tough the inexact science of the NFL draft is when the Patriots can pick up 3rd and 4th round draft picks from just a year ago off the waiver wire.

Ultimately, the onus will be on these players and WR’s coach Chad O’Shea to get these players worked into the system and learn the playbook. Then O’Shea and Offensive Coordinator Josh McDaniels will have to find a way for these players to learn to get a little separation at the line of scrimmage.

One of the things McDaniels and the Patriots as a whole are good at is, adapting a player and playing to his strengths rather than trying to force him to adapt to a rigid system. If they can find ways to do that, then these players will have good production here. Don’t expect big numbers from either, however, there is no reason why, if they put the time and effort in and find a bit of chemistry with Tom Brady, that they can’t carve out a role within the Patriots offense as the 4th or 5th options in the passing game.

File both of these signings under the “Work in Progress” folder.