4 years ago at 9:27 am ET
Follow @IanLogue
Posted Under: 2018 Patriots Training Camp 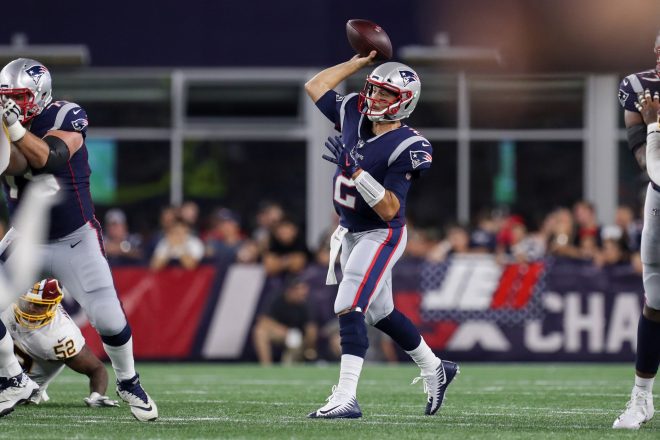 It was great to finally see football back in Foxboro as the Patriots opened the 2018 Preseason with a 26-17 win over Washington on Thursday night to kick off the exhibition season.

After a tough first half, the defense pitched a shutout and the offense ran off 23 unanswered points to earn New England’s first win of the preseason. There were plenty of interesting moments, which saw some players stand out in a good way while others stood out in a way that might hurt their standing heading into the final weeks.  Here’s a quick rundown of a few things we learned about a few of them and some overall thoughts on the game.

1) Brian Hoyer is no Jimmy Garoppolo – This one is obvious to begin with but his performance now that he’s back under the tutelage of Bill Belichick and Josh McDaniels was abysmal for much of the game.

Hoyer was just 3-of-9 through the majority of the first half for 9-yards and it wasn’t until the closing minutes of the half that Hoyer managed to put anything together offensively.  Trailing 17-0, Hoyer managed to complete three straight passes for 56-yards, the final two of which came thanks to the speed and quickness of receiver Devin Lucien where the receiver picked up 22 and 25 yards respectively.  That took the Patriots from their own 41-yard line down to the Washington 34 and Stephen Gostkowski drilled the 52-yard field goal right before the half.

In the second half Hoyer got it together, completing 10-of-11 for 79 yards as the Patriots’ offense began to get into gear and put together two long scoring drives of 19 and 16 plays while punching it into the end zone both times.  However, at that point Washington was deep into their reserve players and it’s going to take some solid play over the next few games to give fans much hope that things will be O.K. should the unthinkable happen and Tom Brady gets injured.

Overall, it certainly wasn’t his best effort.  Aside from his turnover, Danny Etling seemed to be a player who actually had better command of the offense.  Hoyer may catch a break in terms of his job security since Etling is just a rookie, but he certainly didn’t help his stock much in this game.

2) Wise was terrific – Deatrich Wise went out last night and put together a terrific outing and looked like a player who should be quite a factor in New England’s defense this season.

He showed a lot of power and quickness, making life difficult for Redskins offensive linemen all night while also tallying a quarterback hit.

While the stat sheet doesn’t tell the whole story (he finished with just one tackle), he was extremely disruptive and it’s hopefully just a taste of what he’ll bring to the table this season.

3) Webb showed us something – With the Patriots looking for a shifty back who can make plays, undrafted running back Ralph Webb certainly impressed when given the opportunity in his first preseason game.  He carried the football 14 times for 46-yards and two touchdowns Thursday night, along with two two-point conversions.

He showed some pretty good vision and did a good job of hitting the hole and taking advantage of each opening while accounting for five of the team’s 12 rushing first downs, three of which came on third down.

While Jonas Gray taught us never to get too excited over one game’s performance, Webb definitely made the most of his time and has now put himself on everyone’s radar as someone to keep an eye on. 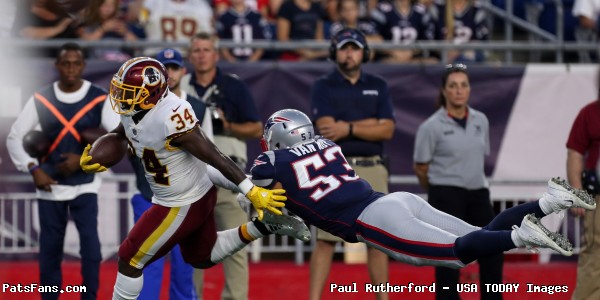 4) Not Van Noy’s best night – After making some comments about how much better he believes the defense will be this season, Van Noy had what he’d probably admit was a forgettable evening.

He looked slow and not as quick as he did last season, with one key play coming early in the game on Washington’s second offensive possession when he got beat outside by Byron Marshall and couldn’t close the gap, diving and not even coming close as Marshall took off and picked up 25 on the play.

It was very unlike him and will likely be a source of motivation the next time he hits the field.

5) Same for Gilmore – It was also a tough night for Stephon Gilmore, who the Redskins went at during the early part of the game and the veteran didn’t have his best performance.  He also looked slower than normal, including on a 20-yard first quarter pass where Davis got away and Gilmore wasn’t able to close and make the tackle.

For a player who did pretty well in man coverage the last time we saw him, he looked more like the player we saw in the early portion of last year.  Hopefully it’s not a sign of things to come, but he definitely didn’t look like himself.

6) Lewis made the hit of the night – Washington’s Trey Quinn got introduced to Ryan Lewis, who made what may be the biggest hit we’ll see this preseason.  On the play Quinn was about to make a reception when Lewis arrived just as the ball got there, driving his shoulder directly into the receivers midsection before he ended up in a heap on the ground.

Lewis jogged off but Quinn remained on the ground, with both arms wrapped around his stomach as he writhed around on the ground for about a minute in obvious pain.

He was eventually able to leave under his own power but lasted mere moments on the sideline before leaning over the side of a trash bin and vomiting, which the cameras happened to catch during the television broadcast.  He later left the game and didn’t return.

7) Geneo Grissom with a big play – Grissom made his own highlight following a strip sack by Trent Harris that he alertly scooped up and ran back 53-yards on his way to what seemingly appeared to be a touchdown.

However, Lewis was trailing him and appeared to be more focused on celebrating instead of keeping an eye on a potential player who might stop Grissom from reaching the end zone.  Washington receiver Simmie Cobbs Jr. had other plans and took Grissom down short of the goal line after Lewis failed to turn around and block him out of the play.

While it ultimately didn’t matter because the Patriots still punched it in, Lewis can probably expect to get some backlash from that in the film room thanks to that momentary lapse in judgement. 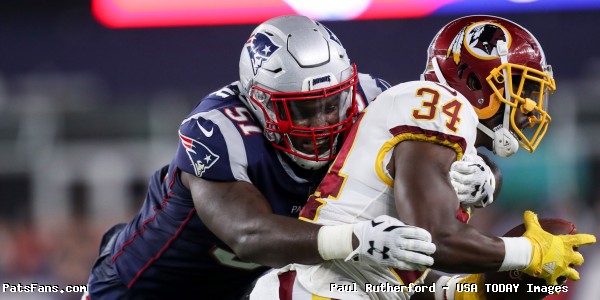 8) Bentley Stands out – Ja’Whaun Bentley made some noise on Thursday night, playing well while making some big hits.

Bentley also nearly had a forced fumble in the second quarter that Danny Shelton recovered and took off running before the officials blew it dead.  Belichick challenged the play but they had ruled forward progress so it wasn’t reviewable.

It’s unfortunate, but regardless of the ruling it will be a play that sticks out on film and his overall body of work Thursday night was pretty good. He finished the night as the team’s leader in tackles, finishing with six tackles including two for a loss and a quarterback hit.

Lucien, who is currently donning Garoppolo’s #10 jersey, played really well and was one of the few bright spots for an offense that in the first half couldn’t do much of anything.  It wasn’t until his two big receptions that suddenly the Patriots seized the momentum and got back into the football game.

It’s a little early to get too excited, but for a team in need of a spark given that they’ll be without Julian Edelman for the first month, it’s not out of the realm of possibility that Lucien could battle his way onto the roster if he can string a few more games like this together.

10) Patterson made a strong case for himself – We already know what he can do in the return game but Patterson did a pretty good job as a receiver Thursday night as well.

Patterson finished the night with two catches for 38-yards, but both were memorable as he went up and made two terrific plays on the football, the second of which was a circus catch where he showed tremendous concentration despite a defender right on top of him.

If he can settle into the offense, he’s certainly got the size and speed to be a dangerous weapon.  It will be interesting to see what he can do in the event he’s paired with Brady in any of the upcoming games, which will tell us a little more about what we might be able to expect from him.

11) Hill stands out – While Bengals fans may be glad he’s gone, the Patriots are likely pleased that Jeremy Hill is a Patriot after what he did Thursday night.

Hill ran the ball hard and also showed great vision, breaking through some tough tackles while also scoring a touchdown.  He finished the night with a team high 4.6 yards per carry along with four first downs.  He really looked good and after what we saw from both he and Webb, it looks like we might be in for a pretty competitive group heading into these final three games.

The Patriots will face Philadelphia next Thursday night at 7:30pm at Gillette Stadium.