4 years ago at 8:31 am ET
Follow @IanLogue
Posted Under: Daily Patriots Notebook 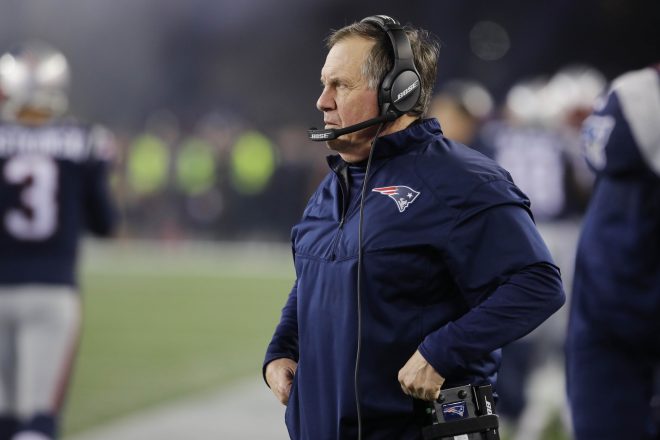 Another interesting morning on this Tuesday and here’s a rundown of today’s news.

Was Mayfield on Patriots Radar? – While New England finished the draft without taking a top-tier quarterback, it sounds like there was at least a shot that they might have been in the mix for one depending on how things unfolded.

Peter King of MMQB pointed out on Monday that after the NFL Network’s Peter Schrager mentioned during the telecast that the Patriots spent time last Monday with Baker Mayfield (and Mike Reiss later reported that Josh McDaniels made a visit with him in his hometown last week), it appears that New England may have been willing to take a shot at trading up to get him if he dropped out of the top five.  Given that McDaniels took the time to travel there to meet with him, King believes that the Patriots may have had plans to put together a package worthy enough of moving up to take him.

Obviously, that didn’t happen given that Mayfield was gone immediately after the Browns snatched him up with the first overall pick in the draft.

It sounds like had the Browns gone in another direction, any shot New England might have had at him would have been a long one, with the Cleveland Plain Dealer reporting that at least a half-dozen teams had Baker on their radar, which means that the Patriots needed to hope that  Darnold, Josh Allen and Josh Rosen were among those picked in the top five.  One of those teams may have been the Jets, who reportedly quietly had Mayfield at the top of their wish list. They instead settled on Sam Darnold as their hope of turning things around in New York.

If that’s true, it’s hard not to wonder who New England’s potential trade partner may have been to pull that off.  The Bears and 49ers seem to make the most sense at #8 and #9, which means that’s probably where Mayfield would have needed to drop for the Patriots to make a move for him.  That being said, that could have meant they didn’t feel confident enough in Rosen since they could have had a chance to move up and take him after he dropped to #10 and was selected by Arizona.

Either way, for fans wondering why they didn’t take one that high, it at least sheds some more light on the reason behind it.  For now, they have a project in seventh-round pick Danny Etling in a low-risk move and it will be interesting to see what McDaniels does with him.  If Etling pans out, it obviously would be terrific.  If it doesn’t, it cost them nothing to try and they’ll have another shot next year with a stockpile of draft picks to try and go after one.

It’s not an ideal situation and they’re left without a potential successor for another season as Brady heads into 2018 as a soon to be 41-year old quarterback. But give them credit for not forcing a square peg into a round hole if they didn’t feel comfortable with who they had to choose from.  However, if Etling doesn’t show signs of potential, the urgency this time next year should be interesting to watch in terms of how they deal with it.

Brady “Pleads the 5th” On Whether he Feels Appreciated – For anyone wondering what the headline of the week will be, it looks like we know the answer to that question.

Tom Brady was interviewed by his favorite reporter, Jim Gray, at the Milken Institute Global Conference where he was asked a variety of questions that included whether or not he felt appreciated by the team.

For the sake of being completely transparent to avoid the question of context, here’s the exact question, response, and subsequent follow up based on the below video.

“Do you feel appreciated by them [the team] and do they have the appropriate gratitude for what you have achieved?”

He also added, “I think everybody, in general, wants to be appreciated more at work.”

He was also asked by Gray, “Are you happy?” to which Brady replied, “I have my moments.”

Tom Brady was asked today at the Milken Institute Global Conference if he feels appreciated by the Patriots. His response: "I plead the 5th…" pic.twitter.com/8Tl6k5emj9

The bottom line?  Losing stinks and that’s probably exacerbated whatever issue exists between Brady and Belichick that has led to all the speculation both during the season and since it ended.

But Brady did add that while Belichick’s not the easiest to play for, the two overall have a great relationship.  Jim Gray, after saying Belichick has been very respectful to him, asked Brady what it’s like to be around him.

“He’s very respectful to me too,” said Brady.

“We can tell,” quipped Gray.

“We’ve had a great relationship, a very respectful relationship for a long time and I feel like he’s the best coach in the history of the NFL,” said Brady.  “He has a management style of players and he would say, ‘Look, I’m not the easiest coach to play for’ and I agree, he’s not the easiest coach to play for [smiling], but he’s the best for me and I think what he’s proven is that whatever talent he has, he maximizes talent and I mean, what more can you ask of a coach than that? That’s what I want as a player.”

“I’m sitting in there, I don’t want to coach, I just want to play and you need the coaches to do their job, they need the coaches to do their best.  That’s what you expect, that’s what you want.  They want me to do my best, I want them to do their best.  I can’t do their job, they can’t do mine and it all works, it all comes together.  It’s a hard journey over the course of the season but it’s incredibly fulfilling, or else I wouldn’t be continuing to do it.  I wouldn’t be continuing to want to play.”

“He’s an incredible coach. He’s been an incredible mentor for me. He’s taught me so much football.  Like I said, to be a 22-year old kid and to come and learn from him, I mean, I wouldn’t be sitting here without his coaching.  I wouldn’t have the success without how incredibly talented he was, along with a lot of the other coaches, a lot of the other players, a lot of the other people in the organization because it takes everybody to do it.  Everybody.  The guys who are cleaning the locker room after practice, it takes them too and you better have respect and appreciation for them because I’m not the one doing that job, but we all expect that the job needs to get done.  That’s part of being in a great culture and for us, continued success on our team.  Everyone is looking for continued success in their business and that culture really sets the tone for everybody.”

Expect this one to get a lot of play this week, although after digging out the available video and seeing it in context, it’s not as bad as it will be played out to be.

The interview went on for about an hour, and begins with Brady getting uncomfortable with being called “the greatest quarterback and football player in the history of the National Football League” replying, “You’re right, I do hate that.”  The full video posted directly by the Milken Institute is below, which should help put some minds at ease:

For those reading the "I plead the 5th" headlines regarding Tom Brady's comment from the Milken Institute video with Jim Gray, here's the full video posted by @MilkenInstitute that people should watch to provide the full context of the interview: https://t.co/QlZCJTigtr

Georgia Declares New England Their New Campus  – Following the additions of Georgia Bulldogs Isaiah Wynn, Sony Michel, along with current players Malcolm Mitchell and David Andrews, the University of Georgia is quickly becoming what Rutgers was years ago in terms of the number of players they’ve brought in recently.

The school took notice, proclaiming Foxboro Massachusetts as their new campus here in New England with a tweet yesterday afternoon.

With all the beautiful weather this week, make sure you take some time to visit our updated North Campus! 👇 pic.twitter.com/KYKNCwRCfq

Well-played.  Hopefully the two latest additions work out as well as both Andrews and Mitchell have, with Mitchell hopefully looking to improve on his rookie season before he missed last year due to injury.

Garoppolo Fired Up For Sharks Game – We’ll close it out on this note just because the GIF of him was amusing to watch. Former Patriots QB Jimmy Garoppolo was all fired up for playoff hockey last night, in a video captured by NBC Sports and posted by the San Jose Sharks’ Twitter account.

Jimmy G is here and he is PUMPED. @49ers | #BayAreaUnite pic.twitter.com/8JIQN4CTqt

For those who aren’t lip-reading experts, Garoppolo shouted, “Let’s go Sharks fans! Get up out of your seats! Let’s go!” before heading out.

By: Ian Logue
Some good news on Wednesday as rookie wide receiver Tyquan Thornton was out at practice, which hopefully marks the start of his return toward getting…
9 hours ago

By: Ian Logue
Patriots quarterback Mac Jones was back at practice again on Wednesday, which doesn't make much sense given the severity of the high ankle sprain he…
10 hours ago

By: Russ Goldman
In this episode, we look back at the Patriots loss to the Packers, and then we look ahead to the Lions game.
12 hours ago

By: Ian Logue
The New England Patriots are continuing to get ready for the Detroit Lions this weekend, with Bill Belichick's team trying to avoid their third straight…
15 hours ago