Not football related, but our thoughts go out to the Humboldt Broncos, the Canadian Junior Hockey team whose team bus was hit by a truck and resulted in at least 14 players and coaches dying.

Quick Hitters: Mike Reiss of ESPN wrote a piece this week about the nominating committee for the Patriots team Hall of Fame of which he is a member. With the influx of so many of the Super Bowl veterans, there is a logjam of deserving players that will eventually get in. That’s bad news for players and coaches of past generations. And notably coach Chuck Fairbanks who we’ve been campaigning for, fruitlessly for several years.

Most of the fans who vote are too young to remember him and forget that he put together some excellent teams and a 1976 team that should have been a Super Bowl team. Money and management issues doomed his time here but take a look at how poorly the team drafted before he arrived and while he was here.

The Patriots made another under the radar move by bringing in tight end Troy Niklas formerly of the Cardinals. The 6’6, 270 Notre Dame alum is known strictly as a blocking tight end but was thought to be more than that when he arrived in the NFL as a second-round pick for Arizona. The Patriots scouted him that year so it is another case of them bringing in guys they initially coveted in the draft. If Niklas can stay healthy, it will be interesting to see what Josh McDaniels can bring out of him.

Brandin Cooks had nothing but nice things to say about Bill Belichick and the Patriots on the way out the door after his trade to the Rams. Although many fans and media did a bit of bashing on him as he left, he spoke highly of Bill Belichick saying, the team handled the situation the right way.

They gave me a call about an hour before it happened,” Cooks said, to the Ventura County Star. “I have a ton of respect for him (Belichick) and we have a ton of respect for each other. You hear the horror stories of guys finding out on Twitter, but at the end of the day, you know the way that they run things over there and the respect that we have for each other, he gave me a call and gave me a heads up. And at the end of the day, all you can do is respect that and have to understand it’s a business.”

Jordan Matthews Signing Adds Size and Depth to the WR Roster :
The signing by the Patriots of WR Jordan Matthews didn’t register very highly on the national radar either, but it is just another example of Bill Belichick building a team and not a fantasy football roster. Matthews spent an injury-riddled 2017 season with the Buffalo Bills and had a career-low 25 catches in his only season there.

But in the three years prior while with the Eagles, Matthews logged 225 catches for 2673 yards and 19 touchdowns. That averages out to 75 catches, 891 yards and six+ touchdowns per year. Hardly numbers to easily dismiss. He brings the element of versatility to the team that the coaches love here. He can play outside or in the slot and he also brings size to the wide receiver group.

At 6’3, 212, he’s a bigger target which may well factor into the red zone offense. His size is something different to the normal slot receiver we’ve seen in New England. While he doesn’t the quickness off the line of an Edelman or Amendola, he runs precise routes and is a proven move the chains type of guy. He has good but not elite straight-line speed and if he can learn the offense this spring, he may be a very solid pickup for the team this season.

Cooks Trade Opens Up Options Galore For the Patriots:
The Cooks trade to Los Angeles was, in the end, too good a deal to pass up. The Patriots tried to re-sign Cooks after a very solid first (only) season with the team. But there was no way they were going to pay Cooks the kind of money he’s looking for.

One thing to keep in mind is, fans are always lamenting that Belichick doesn’t covet wide receivers. Our friend Kerry Byrne from Cold Hard Football Facts refers to WRs as “shiny hood ornaments”, and we pretty much agree with him there. Look at this list from “Over the Cap” of the Top 10 Paid WRs” 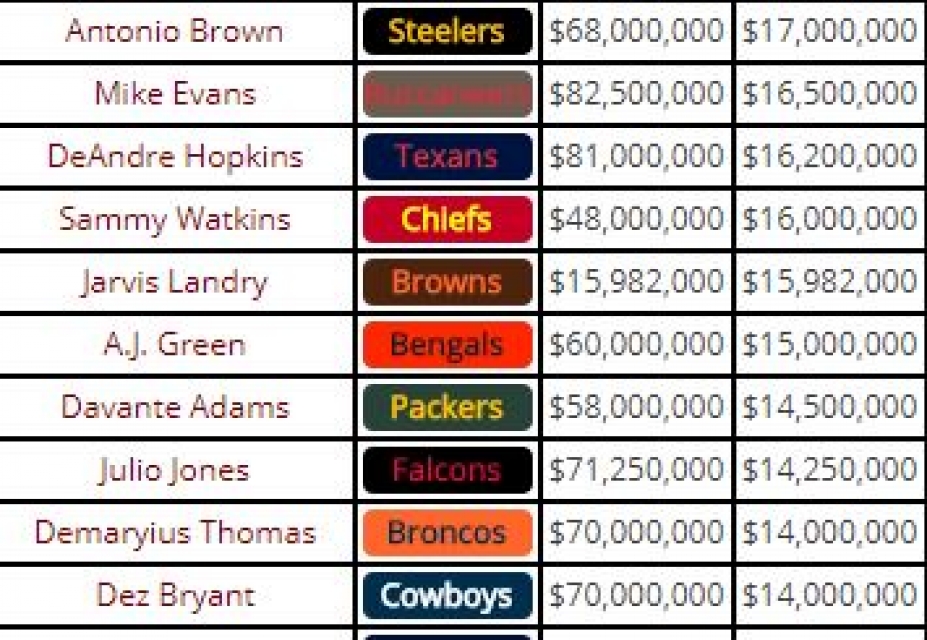 Next to the players’ name is the amount of their contract followed by their current yearly salary. Does anything jump off the page at you?  Of all of the Top 10 WRs getting paid, only one  Demaryius Thomas has a Super Bowl ring. And he got his with the best defenses in the NFL during those years.  Just something to file away the next time someone laments that the Patriots need a diva WR.

So with him being a free agent after next season, the Rams offering a first-round draft pick with the teams swapping later round picks was a great get by Bill Belichick and Nick Caserio. We wrote about they’re options earlier this week.

And we’ll double down here by stating that while they are in a great position to move up in the draft if they choose to, we’d love to see them use all four picks in their first two rounds and get the team some talented playmakers that will restock the youth and depth on the team for the next several years. Will they use them all? Probably not, they’ll be bound to trade back at some point, especially if they don’t see a player they believe is a fit for them.

Bill Belichick’s philosophy is that they don’t covet picks, but players. So if the value isn’t there in their opinion, they’ll trade back. The Patriots draft board and their war room are notoriously smaller than most other teams.  If their perceived value isn’t there, don’t be shocked by a trade down.

Don’t Read Too Much Into Visits And Private Workouts By the Patriots:
The Patriots have been in the news with a lot of workouts and visits by prospects and each time they conduct one, everyone rushes to say that “Player A” is drawing interest from the Patriots and he vaults to the list of everyone’s mock draft. Not so fast there.

While a visit or a private workout could absolutely mean a high level of interest from the Patriots but for many others, it is just an exercise to see what makes a guy tick. For instance, if the Patriots feel an opponent from the division is targeting a player that they won’t see in the draft by may see in the future as an opponent, they’ll ask him in for a workout to see where his strengths and weaknesses are, and see how his thought process works in game situations. It is filed away for possible game planning situations.

And of course, for others, we see them have an interest in a player that they know, will be drafted before they choose. And then the visit is filed away with more information for down the road if this player is ever released or becomes available, they can make a better decision on whether to bring him in or not.

It is just one of those small things that make the team building phase for the team so successful every year.

Fede spent the first four years of his career with the Dolphins after being drafted in the 7th round of the 2014 NFL Draft. Fede, 6’4, 267, has appeared in 51 games with 55 tackles and a safety. He’ll be a depth rotational player for the Bills.

The Bills currently hold the 12th pick in the upcoming draft. Many people are expecting them to trade up earlier in the draft to take one of the quarterbacks that are slated to go in the first round. So far, nothing has been made public about their wishes and they may just be waiting until the night of the draft to see how the first couple of picks in the draft go before deciding when and where and possibly if they move up.

Dolphins Are Playing the Waiting Game as Well:
The Miami Dolphins hold the 11th pick in the 2018 NFL Draft, and most people also expect them to draft a quarterback as well. But Adam Gase has Ryan Tannehill coming back this season from a serious ACL injury this year, so there will be no rushing the prospect onto the field until he’s deemed ready.

Rumors persist that Miami, like Buffalo, will trade up to get one of the more highly heralded QBs that abound this spring. The word is that Gase wants to slide up and grab Oklahoma quarterback Baker Mayfield. If they elect to remain at #11, they may opt for one of the other premium prospects, and get a QB later. In the eleventh spot, there are still a lot of impact players that will be available.

There are some, granted a minority that believes Gase will trade back and garner a bevy of picks to load up on talent and build his depth. Many of the Dolphins fans want to see the team grab Minkah Fitzpatrick from Alabama. While the chances are pretty slim that he’s available by #11, if he slides just a bit during the QB feeding frenzy, then perhaps Miami could move up and pick him up without breaking the bank.

Is Mayfield the Jets Target At #3? Most Believe So:
The New York Jets are also interested in Baker Mayfield as their next franchise QB. According to NFL draft analyst Tony Pauline, the Jets are pretty much locked in on Mayfield as being their pick at #3.

Pauline wrote this week, “There are a good number of league insiders who believe the New York Jets will use the third pick of the draft to select quarterback Baker Mayfield of Oklahoma. This assumes that Sam Darnold is already gone when the Jets are called to the clock.”

With so many good quarterbacks being available early in the draft, the fans reaction to this is naturally split, some love Mayfield, others opt for Josh Rosen. With so many variables, the first night of the draft promises to be a very entertaining and intriguing evening.