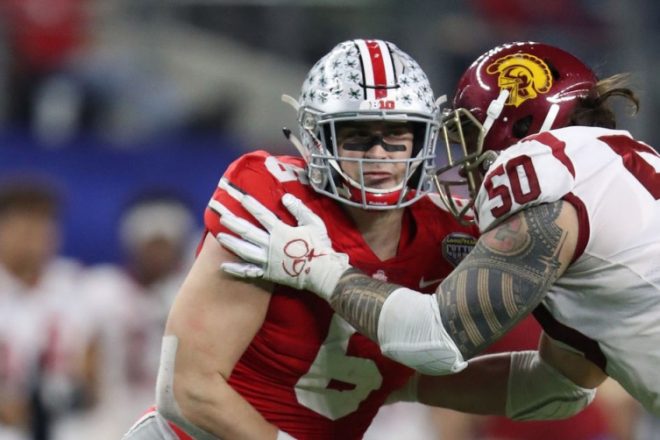 Hubbard One of the Top Edge Players in the Draft

The Patriots were decimated on the edge in 2017. They lost Jabaal Sheard and Chris Long in free agency. But they brought over Kony Ealy in a trade with the Panthers and then drafted Derek Rivers and Deatrich Wise in the draft. They were planning on having the old pro-Rob Ninkovich for one more season along with Shea McClellin and Dont’a Hightower who was moving to the edge last year.

Well, Ninkovich unexpectedly retired in training camp. McClellin and Rivers were injured in camp and were lost for the season. Ealy didn’t fit and was released. Hightower and rookie Harvey Langi who was pressed into some edge work were lost for the year as well. The team brought in Cassius Marsh, but he didn’t work out and later signed Eric Lee. Lee showed a nice ability to rush the passer but had trouble on the edge. They eventually brought James Harrison on late in the season.

The team signed Adrian Clayborn this spring which immediately helps. Hightower, Rivers and Langi return, they’ll join Trey Flowers, Deatrich, Lee, and Adam Butler but they could really use another young edge player which could facilitate moving Hightower and Langi back to linebacker.

Sam Hubbard from Ohio State has prototypical size for an edge player at 6’5, 265-pounds. He still had a year of eligibility left but decided to come out in this season’s draft and has first-round talent. He had a very productive final season with Buckeyes, garnering 42 tackles, including 13.5 tackles for a loss, seven sacks, and two forced fumbles.

He would be a nice fit for the Patriots defense and would be a Day 1 contributor as an edge player as part of their rotation. He could easily develop into an above average pass rusher and a starter.

Hubbard was a lacrosse player (oh yeah another lacrosse player) and is a converted safety before he packed on the muscle and became one of the stalwarts on the team’s defense. Hubbard is a high-motor guy as well as a high character one. He was a team captain as well as Academic All-American.  His work ethic will immediately win over the coaching staff and his tenacity will get kudos for the team’s fanbase.

He has a high football I.Q. and his instincts are excellent. While not an elite athlete, he produces thru his smarts and instinctive play.  He’s a sure tackler and does a good job at setting the edge in the running game.

He’s not an explosive pass rusher, and benefitted from the stunts and twists the Buckeyes ran in the passing game. But he displayed good, quick hands and is versatile and can play on either side of the line. While he’s not an elite pass rusher, he’s a very solid all-around player who can do it all.

– Not an elite athlete

– A bit stiff at times when turning the edge

Hubbard will be an immediate rotational player on the edge. With Flowers and Clayborn and possibly Rivers, he’ll be expected to play whenever they need to keep fresh legs out there.

Yes, in Year 2 he should have packed on a few pounds in the strength and conditioning program. Then he can push for more reps and perhaps slide into the starting position with a solid rookie season.

Geneo Grissom, who has been a very good Special Teams player but hasn’t contributed at all defensively. Hubbard could force him out.

Limited, but he has done some coverage duties in the past

NFL.com’s Lance Zierlein in his profile wrote that:

“Hubbard will pass the eyeball test with his height, weight, and build, but he’s missing the plus athleticism to take him over the top as a pass rusher. His tape is solid, but nothing jumps off the screen. Teams looking for a big-time edge rusher won’t get too excited by him, but he will appeal to defensive coordinators looking for guys with size and motor to plug into a blitz-heavy, twist-happy defense. Hubbard could become an early starter as a strong-side defensive end for a 4-3 defense.”

Hubbard is what many draft experts call a “safe pick”, in that he has a very high floor and while he may not become an elite defensive end, because of his work ethic, excellent instincts and high motor could be a very good one.

While Patriots fans want the guys who can pin their ears back and rush the QB kind of players, that isn’t the defense that they run. The “read and react” defense is predicated on setting the edge first in the running game and then having the ability to push and squeeze the pocket forcing the opposing QB into making mistakes.

They want versatile guys who can do it all and Hubbard is the kind of player they covet. Bill Belichick will love this guy, he has a tremendous work ethic, high football I.Q., a non-stop motor and will be a productive member of the defense.

While he’s not that explosive guy at the line, he’s very quick and ran the 3-Cone Drill in a very impressive 6.84. He has the ability to be an above-average pass rusher in the NFL with a bit of experience. He should be an immediate Day 1 contributor to the defense if the Patriots decide to pull the trigger.