In an unsurprising move, the Patriots have released TE Martellus Bennett. Bennett had stated after the Super Bowl that he wants to continue to play football in 2018, but it won’t be, at least initially with the New England Patriots.

The Patriots released the veteran tight end on Wednesday afternoon. It is unknown whether they tried to work a deal to restructure his contract that would count for $6.2 million dollars against the salary cap. No one expected him back for that amount. 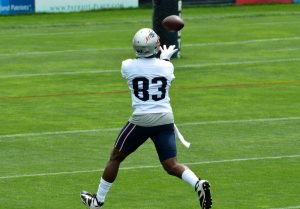 The soon-to-be 31-year-old tight end hinted at retirement, especially after he struggled with the Packers and was bothered by a bad shoulder. In seven games, he caught just 24 passes for 233 yards with no touchdowns and was roundly criticized as the Packers showed him the door. Especially after returning to New England. He played in just two games for the Pats before going on injured reserve due to a hamstring issue as well as his previous shoulder issues.

With Bennett’s release, it would seem that either he wouldn’t consider a restructure or the Patriots expect Rob Gronkowski back …or they don’t believe that he can hold up any longer…possibly a combination of all three.

Bennett gets the benefit of being released early and he doesn’t have to wait for the feeding frenzy of free agency to sign anywhere. He can find himself a home anywhere, but it doesn’t appear to be in either New England or Green Bay in 2018.