The Patriots have only $13.14 million dollars under the salary cap right now and will have to be creative in creating some room as well as decide who they want to retain. They’ll need to sign a few of their own free agents as well as grab some others who they covet from other teams. All the while knowing they have draft choices to sign.

We’ll be doing profiles on each of the free agents in the upcoming days and give you our take on whether they return or move on. One of the more intriguing players facing free agency is running back Rex Burkhead.

The Patriots made a very nice move last spring grabbing Burkhead off of the free agency pile in an under-the-radar move from the Cincinnati Bengals. Burkhead was stuck behind two very talented backs and didn’t see the field much. They signed him for the modest price of $3.15 million dollars.

The team liked his versatility, he can run the ball between the tackles, catch it out of the backfield and play a key role on special teams. We knew he’d fit right in here and it was easy to see that the coaches liked what they saw as well. 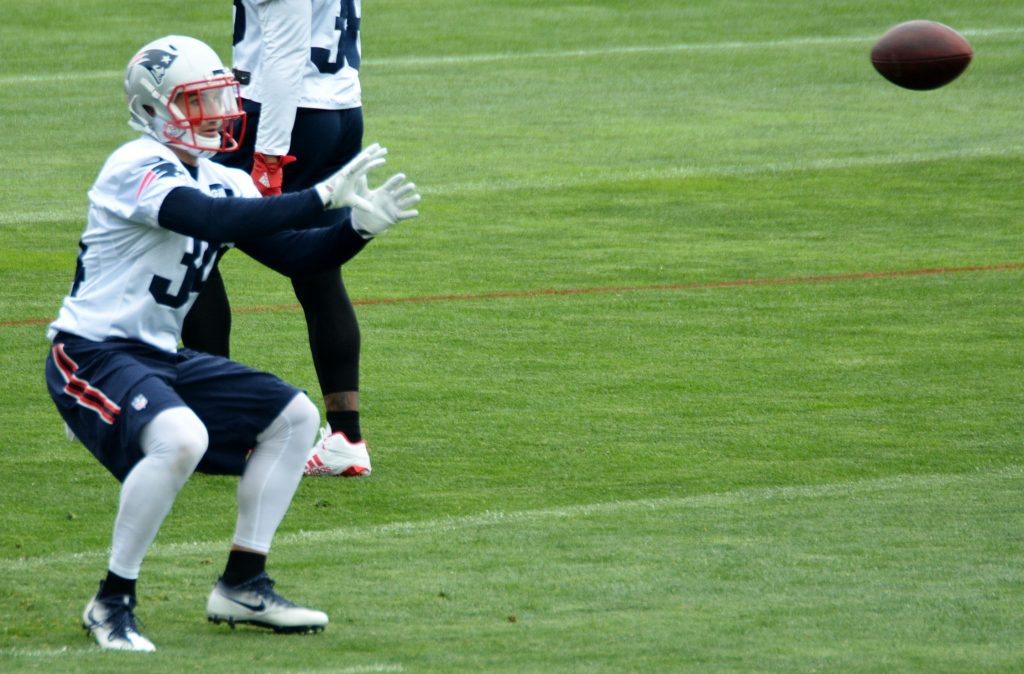 Burkhead hauls in a pass during Patriots minicamp in June. SBalestrieri photo

Why Burkhead Will Return: The Patriots and especially Bill Belichick love players who can do more than one thing. And versatility is Burkhead’s middle name. His season production, 264 yards on the ground with five touchdowns, 254 yards in the air with three more touchdowns. A blocked kick on Special Teams…

When the Patriots made the backfield a combination of Burkhead, Dion Lewis, and James White, the offense was extremely difficult to stop. The trio made it hard for opposing defenses to expect a pass or a run. All three also do a very good job as pass blockers as well, something the Patriots demand of their running backs

Burkhead was injured a couple of times this season and played in just 10 games in the regular season. And that may work in the Patriots favor this season. He showed the team he is an excellent fit in what they do and his two injuries last season may scare away, would-be suitors from investing heavily in a guy that they’re not sure if he can hold up for the long term.

Why Burkhead Won’t Return: There are enough of Burkhead’s good work with the Patriots on tape to show other teams what he can do. And let’s face it, the Patriots don’t pay their running backs to retain their services. They let them walk to other teams.

Stevan Ridley, BenJarvus Green-Ellis, Shane Vereen and Danny Woodhead ring a bell? All of them had fairly good success here in New England. Then when it was time to get paid, they moved on, just like LeGarrette Blount did…twice.

Players like him are rare, he can play four downs and do it all. If a team comes in with an offer that blows him away, he’d be foolish not to consider it. Careers in the NFL are woefully short and so is the window of peak earning potential. And Burkhead is right there. He’ll be 28 this season.

And of course, the Patriots could have cold feet themselves. Burkhead was injured twice last season and a Belichick mantra is availability is very important. Could they decide to walk away because of injury concerns? Absolutely.

Bottom Line: The Patriots love the selfless, egoless attitude of Burkhead. Bill Belichick lauded his work ethic speaking of him before the Super Bowl.

“Rex is really is a four-down player. He can play on first, second, third and fourth down at a good level. And those players are hard to find in the National Football League. He’s a very reliable, dependable player.”

Burkhead saw that for the first time he was given a chance to play meaningful snaps in an offense. And he thrived in it, before getting dinged up. He seemed as happy here as the coaches and other players were to have him here.

Both he and Dion Lewis are free agents this spring. Lewis had much more production this past season and is extremely elusive in the open field. If there is one back who will get a lot of money offered upfront, it is him.

Again this could work in the Patriots favor. They aren’t going to break the bank for Lewis and if another team scoops him up, the team could throw some decent but not crazy money after Burkhead on a short-term (2 years) deal that could lock him up for the foreseeable future.

Various cap-based projections put Burkhead in the $3.3 million dollar range for 2018. That is a modest raise from what the Patriots paid him in 2017, but if they can work out a deal in that vicinity, then there is a very good chance of Burkhead returning.

This is another intriguing decision that Bill Belichick and Nick Caserio will have to make this spring. On one hand, they both know what Burkhead brought to the table when he was available on the field. But they also know in his only season in New England, he missed a lot of time.

That’s why a short-term deal would work for both sides. They won’t be able to keep both Lewis and Burkhead. In the end, they may not be able to keep either. But keeping Burkhead is a financially more doable situation for the Patriots. If the money is right…