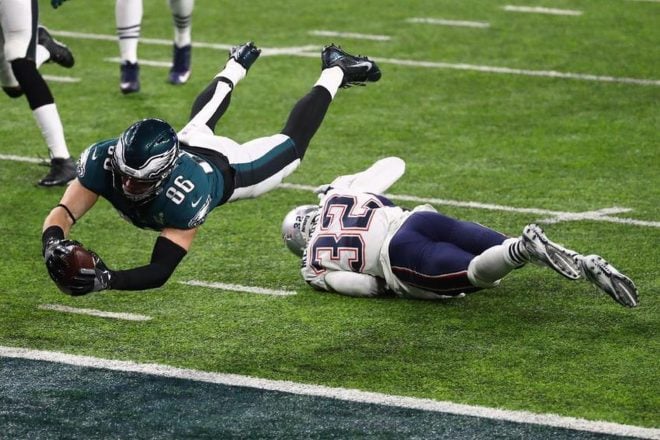 This one won’t go down as a defensive struggle as both teams combined for nearly 1200 yards of offense and 84 points, but it was the Philadelphia defense that made the one big stop when Brandon Graham stripped Tom Brady of the ball and it was the Eagles and Foles who played tremendous all game long walking over the Lombardi trophy and a huge win in Super Bowl LII.

Foles, who was the MVP completing 28-43 for 373 yards with two touchdowns and a pick. He connected with Zach Ertz for a touchdown with 2:21 left to give the Eagles a 38-33 lead but it certainly appeared that the call would be reversed.

But the call didn’t matter a bit. It would have just 35-32 before the Brady sack.  There were a couple of close calls in terms of what is or what isn’t a catch… but again, when the defense couldn’t stop Foles and the Eagles offense all game, that wasn’t the reason for the loss.

It was simply another tremendous Super Bowl, maybe not if you like a defensive struggle in terms of drama, it doesn’t get much better. Right down to the final pass into the end zone as time expired. The Eagles made just one or two more plays than the Patriots did and that’s why they are the new Super Bowl champions.

Philly’s Coaching Staff Called a Great Game:
Doug Pederson said after the game that the Eagles wanted to stay aggressive with their play calling and they did and the Patriots were completely unable to stop them. Alshon Jeffrey was getting the better or Eric Rowe early in this game. Nelson Agholor was beating everyone the Patriots trotted out there against him. The Eagles identified mismatches they felt they could win and exploited them. Agholor had nine catches on 11 targets…he was uncoverable all game long.

Zach Ertz had a very strong game and Corey Clement torched the Patriots for 100 yards receiving, including a 55-yarder where Jordan Richards took just a brutal angle on the play. Pederson’s best call was on 4th and 1 near the end of the first half, they ran the option pass to Foles. With him in the shotgun, no one accounts for him and he trotted all alone for a huge touchdown to put the Eagles up 10 at the break.

Defense Was MIA:
The Patriots defense was dissected and shredded for over 500 yards of offense (374 passing, 164 rushing) by the Eagles who also gashed them for 41 points. The Patriots defense was manhandled up front by a very good Philadelphia offensive line that opened up big holes in the running game while giving Foles plenty of time to throw.

The pass rush was missing most of the game, Trey Flowers had a very, very quiet Super Bowl and was not a factor at all. With the exception of Gilmore and perhaps Pat Chung, and James Harrison, it was their worst performance since Week 1.

Matt Patricia and Bill Belichick didn’t have the answers this week. With the exception of moving Gilmore on Jeffrey, who was shut down, they didn’t make any adjustments that worked. They were out-coached in Minneapolis.  It doesn’t happen often but it did tonight.

Brady Was Fantastic Despite the Loss:
Immediately after the game, I was reading criticism of Tom Brady which is laughable. Brady was shredding the Eagles defense in the second half as bad as they were being shredded.

Brady threw for 505 yards and three touchdowns averaging 10.5 yards per attempt on the night. And the offense put up 33 points. I didn’t like the play call early in the game on 3rd and 2 with the end around to Brandin Cooks, where they were moving down the field, but that is the way the cookie crumbles, it could have been 40 with a better call.

Cooks left with a concussion on an awful collision with Malcolm Jenkins but Brady and the offense reacted well and spread the ball around. Danny Amendola was his clutch self, catching 8 passes for 152 yards, Gronkowski had nine catches for 116 yards with a pair of touchdowns, nearly all of it coming in the second half. Chris Hogan had six catches for 128 yards and a score. Overall the Patriots had three players with over 100 yards receiving.

The Butler “Didn’t Do It”, Benched for the Game:
With several players in the secondary struggling all game, it was more than curious that Malcolm Butler was benched for the entire game other than special teams. Bill Belichick said after the game that it wasn’t a disciplinary decision but a strict football one why he didn’t play.

Butler, who was very emotional during the National Anthem, may have realized that his last game in New England (and the chances of him returning now are practically nil) was coming to an end in the worst way possible, by riding the pine. What had to be particularly galling for Butler was that the secondary was being gashed.

With no one able to cover Agholor, in the biggest game of the year, was Butler the worst option between Rowe, Bademosi, Richards et al?

Changes are Coming:
Suffice to say, the team we see at the mini-camp in June will be quite different from the one that took the field tonight. Matt Patricia is gone. It was thought Josh McDaniels was gone too, but now, some in the media are saying to pump the brakes on that talk…at least for now. But the roster will see changes as the team will have several decisions to make in the coming days, which we’ll address later.

Sorry New England, no parade this year, we’re on to the NFL Combine.